From Grease to Soap: How One Woman Is Repurposing Used Oil

Bremerton, Washington resident Laura Kneib is what one might call a “soap scientist.” After all, since 2012, Kneib has been creating scrumptious-smelling soaps using reclaimed vegetable oil — the very same oil that gives French fries that good, greasy flavor. 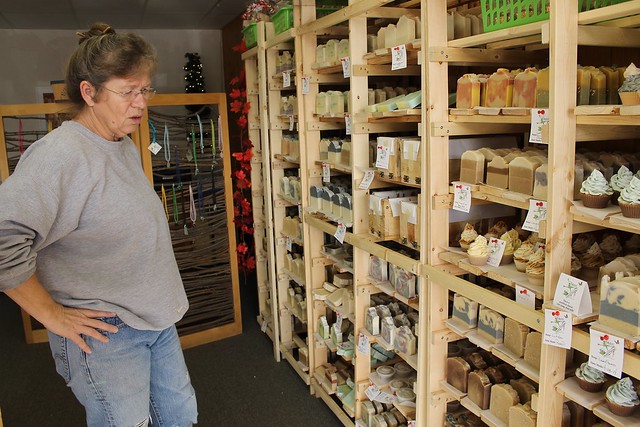 Photo by Seraine PageLaura Kneib surveys the collection of handmade soaps at her store in Bremerton, Washington.

Once the oil is filtered and mixed with lye, rainwater, essential oils and other natural ingredients, Kneib’s soaps smell more like lavender, blackberry, mimosas, cucumber, and more. The ingredients come from a variety of sources — Kneib kayaks Ostrich Bay to find seaweed to dry out and plucks dandelions from her yard — to add beauty and scent to her soap. “It comes from Mother Nature,” she says of her ingredients. “The closer you stick to that lady, the better it is.”

As owner and founder of F.R.O.G. Soap in Bremerton, Kneib caters to those who love natural, chemical-free bath products.

“Every time I make a batch, it’s fascinating,” admits 61-year-old Kneib, who has been making soap since she was a preteen. “It’s incredible using all that oil and a few other things — it’s amazing it creates this soap.”

F.R.O.G. (Soap) isn’t just a cute name; it actually stands for “From Reclaimed Oil and Glycerin.” Kneib’s curiosity got the best of her in a restaurant years ago; she wanted to know just where used cooking oil went. After discovering it ended up in landfills, she felt the urge to do something about it. So she figured out how to turn used vegetable oil into soap. And lip balm. And shampoo. The list goes on.

Her experiments started in her small kitchen and expanded from there. Now Kneib has a brick-and-mortar storefront, a thriving online store, and a need for more soap curing racks. “It’s going out the door faster than I can make it,” says Kneib, who handcrafts the soap in small batches. “People just love it. I love that people love it.”

Even more impressive, perhaps, is the fact that her one-woman shop has recycled nearly five tons of materials like waste vegetable oil, cardboard, and biodiesel glycerin in four years.

In Kitsap County, where Kneib lives and works, local restaurant owners know her well. Even the nonprofit theater up the street has stopped paying to have oil from its restaurant lugged off. The staff just takes it down to Kneib’s shop.

Often, she comes home to piles of cardboard and cedar dropped off by locals who know she recycles endlessly. The cardboard is used in packaging; the cedar is crafted into soap dishes and curing racks by Kneib. 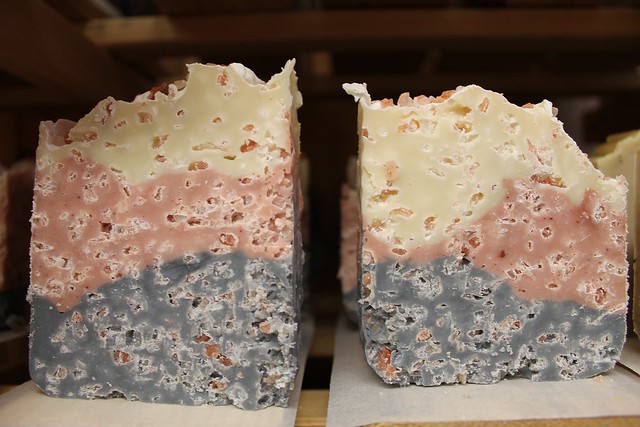 Other than being able to entice customers with the smell of soap from down the road, the recycling aspect really excites patrons.

Self-declared soap snob Jane Buchanan calls Kneib’s soap “beyond-compare.” While she loves the smell of the soap, it is really the company philosophy that impresses Buchanan the most. “What could possibly be more uplifting and admirable than a soap company dedicated to the principles of recycling and protection of the environment?” says Buchanan. “Knowing that the soap is made with recycled ingredients is both impressive and exciting to me… a company is a reflection of its owner, and this is definitely true of F.R.O.G. Soap and Laura.”

While Kneib does get orders online, many of her customers are willing to drive across the state to see her in person at her store, like Mary J. Gauntz of Burley, Washington.

Gauntz says she buys Kneib’s soap because she wants to support local businesses, especially ones that are environmentally conscious. “I am amazed at her skills and ingenuity,” says Gauntz. “I am impressed with her creativity in recycling items and amazed at how much she, as only one business person, is able to recycle five tons of materials.”

Gauntz met Kneib at a bazaar some time ago, and she hasn’t forgotten her since, which is why she loves stopping into F.R.O.G. Soap from time to time. “Only by a visit can one truly see all the options,” says Gauntz. “Laura is quite impressive; I would call her a Renaissance woman, as she is gifted and talented in so many facets of life.”

Each year, restaurants create three billion gallons of waste cooking oil, according to the United States Environmental Protection Agency. Kneib shakes her head at the thought — it’s why she isn’t afraid to share her soap recipes. She wants others to distribute her knowledge in hopes of keeping even a little bit of oil out of the landfills. Kneib even offers soap-making classes in her tiny 400-square-foot shop. She jokes that one day she will “croak” but before that happens, she wants as many people as possible to learn the craft of reclaiming oil.

Her ultimate dream would be to have a larger shop where she could create even more batches, teach classes, and hire employees to continue her work. It’s also part of the reason she brought on an intern to help out; it exposes her to one more person who can learn her tricks of the trade.

“They love the whole bit of reclaimed oil; they’re tickled,” says Kneib of her customers. “They like the fact that it’s chemical-free and earth-friendly. It’s neat.”

While there, Walsh took part in the Cochabamba Pedal Project, an effort that involved the use of a machine known as a bicimaquina (bike machine) to help propel forward the idea of social enterprise.

Soap, a much-needed necessity in the area, was something the project workers hoped to easily create with the bike — the bicimaquina was to be used as the power source for stirring soap. Problem was, Walsh, nor her fellow interns knew anything about soap chemistry.

“Our team was developing our own recipe for soap, so I reached out to Laura for ideas and help in our process,” she says. “Most of my questions to Laura were about the soap process, specifically the best measurements to use of each ingredient…we relied heavily on what information we could find or individuals we could learn from.”

The bicimaquinas were good for stirring the soap, but the team’s recipes had failed. Because pollution is such an issue in Cochabamba, Walsh sought ways to limit trash while using local resources like soybean oil, lard, lye, and water to make soap.

That’s when she discovered Kneib’s story on the Internet. She reached out, and quickly got an answer on just how to get the right soap formula. Kneib delighted in the request, offering details of how to best filter the oil and where to find a soap calculator online. She also explained how different clays could add color to the soap, depending on local sources.

After trial-and-error and using Kneib’s advice, Walsh worked with local teachers and showed them the process to in turn be taught to students. The project also made clear the importance of sanitation and reducing waste, Walsh says.

“The soap was used initially in the schools for the children to learn about the effects of water contamination, but eventually will be sold locally as hand soap,” she says, adding that the soap is still made in the area today.

“I have so much respect for Laura and the role that she has taken to create great products and move toward a cleaner environment,” says Walsh. “She was so kind and helpful in sharing her expertise for our organization, and I certainly learned a lot from her about perfecting the soap-making process.”

Kneib has also received requests for her soap recipes from others across the country and world, including Chicago, Quebec, and Tunisia. It’s no surprise, since her soap is shipped all over, and her business has been featured on television, but it excites her nonetheless, she says. “It really needs to live on,” she says simply. “To make it go on would be cool.”