On May 7, the French government passed new legislation aimed at phasing out all dolphin and whale captivity, a move that reflects growing public awareness and concern over the poor living conditions cetaceans are forced to endure in captivity. 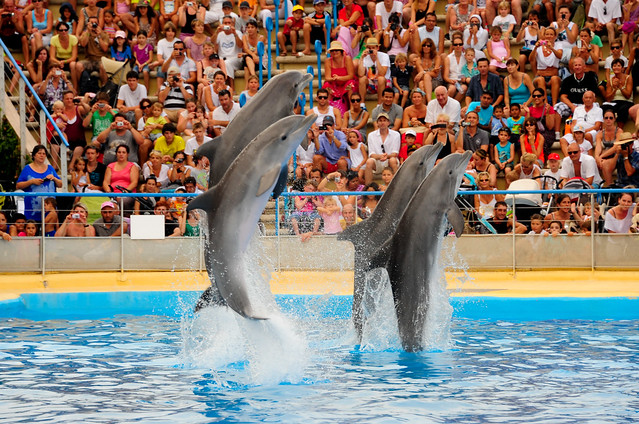 The new law prohibits keeping any cetacean captive, with the ultimate goal being to entirely shut down the archaic industry throughout France. For those unfortunate individuals who are already held captive at facilities such as Marineland Antibes in the French Riviera, the legislation stipulates that no captive breeding can be done. It also prohibits direct contact between captive cetaceans and humans — putting an end to swim-with-dolphins programs — and requires that pools and tanks be made “significantly larger.” Facilities have been given up to three years to comply with the new rules.

Environment Minister Segolene Royal had signed an earlier version of the law that imposed strict controls on dolphin breeding, but then decided to take a “more radical” approach, resulting in a total phase-out of the industry. According to the ministry, this decision was influenced by information that captive animals were being drugged in some facilities.

France joins a growing list of countries that have begun to phase out and ban cetacean captivity. In 2013, India banned cetacean captivity outright; Canada is currently considering doing the same with Bill S-203. Many facilities located in countries that have not yet taken such measures are phasing out their cetacean exhibits on their own, including the Baltimore Aquarium, the Vancouver Aquarium, and the Barcelona Aquarium.

However, the global cetacean entertainment industry leader — the United States-based company SeaWorld Inc. — has so far refused to divest from this industry that has been proven unethical and harmful for dolphins and whales.

Last year, SeaWorld did announce that the company would phase out its orca breeding program — which involved separating mothers from young calves — and pledged to stop theatrical-type shows, claiming that it would instead present orcas to the public in a more “naturalistic” way. The move drew praise from many groups, including the Humane Society of the United States. However, at the time of the announcement, a ban on the very things SeaWorld had pledged to give up was being considered by California legislators. Sponsored by state assembly member Richard Bloom and drawing huge public support, the Orca Protection and Safety Act was signed into law just six months after SeaWorld’s announcement, leading many to question the company’s motivations behind their seemingly noble voluntary pledge.

While SeaWorld has agreed that this generation of orcas will be their last (although a calf was born last month, meaning that SeaWorld could display orcas for another 50 years), they have doubled-down on exploitation of other cetacean species. The company’s San Antonio facility recently unveiled a massive swim-with program that uses beluga whales and dolphins, and Seaworld currently holds 176 cetaceans at facilities across the country. Questions also remain around what the company’s breeding policies are for other non-Orca species.

David Phillips, director of Earth Island Institute’s International Marine Mammal Project, says France’s new law is a “crucial recognition that … breeding ban[s] must include all orcas and other dolphins,” and points out that “SeaWorld is desperately holding onto the myth that ending orca breeding solves all their public relations problems.”

“Orcas may be the largest members of the dolphin family, but they are still dolphins,” Phillips adds. “It is similarly cruel and abusive to hold all species of dolphins in concrete tanks. All dolphin breeding must be ended.”

SeaWorld may be betting that the public will see nothing wrong with dolphin or other whale captivity as long as it does not involve orcas. But the numbers seem to suggest otherwise: In a statement issued Tuesday, the company revealed that their attendance and revenue plunged more than 15 percent in the first quarter of 2017, translating into a $61 million loss. This is a continuation of what appears to be a serious downward trend in SeaWorld’s business ever since the shocking documentary Blackfish hit theaters in 2013.

There exist other options for the cetaceans it holds captive, though SeaWorld has so far refused to explore them.

“Dolphins and whales of all species can and should be retired to seaside sanctuaries for retirement or, where feasible, returned to the wild,” says Phillips. He sits on the board of the Whale Sanctuary Project, a new organization that aims to establish the world’s first cold-water sanctuary that can accommodate orcas. The project recently received a $1 million dollar cash infusion to support their efforts. “The France edict is more proof that it is time for SeaWorld to wake up to the reality that people don’t want to see dolphins and whales being used for any reason,” said Phillips.

While France has made progressive changes that reduce suffering for cetaceans, SeaWorld continues to disregard entirely what the public, and the bottlenose dolphins, belugas, and orcas themselves might want — to the detriment of its business.

Take action: Sign the petition to force SeaWorld to stop lying about its treatment of cetaceans.