Chemicals from fracking wastewater dumped into Pennsylvania’s Allegheny River before 2011 are still accumulating in the bodies of freshwater mussels downstream, according to a new study. 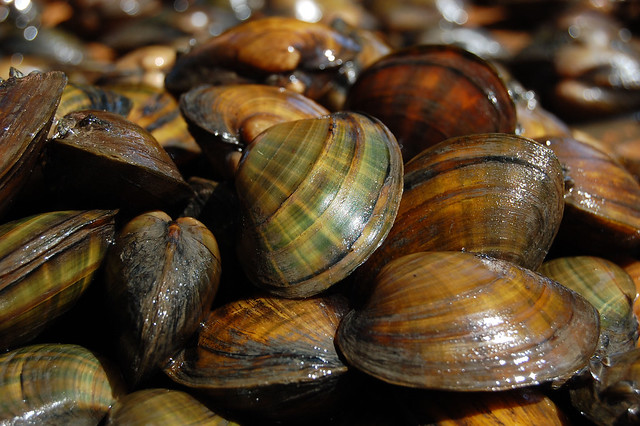 Researchers at Pennsylvania State University found elevated concentrations of Strontium in the shells of freshwater mussels downstream from a former fracking wastewater disposal site in Warren, Pennsylvania, about 143 miles northeast (and upstream) of Pittsburgh.

While the potential health impacts on humans from this contamination are unclear, high levels of exposure to non-radioactive Strontium can disrupt bone growth in children.

“Mussels record the changes in water quality that they see over their lifetimes in the layers of their hard shells,” Nathaniel Warner, a professor in the Department of Civil and Environmental Engineering at Pennsylvania State University who co-authored the study, told EHN. “We can go back about 10 years and see the spikes that indicate when wastewater from Marcellus shale was being treated and discharged into the Allegheny River.”

The study, published Wednesday in the peer-reviewed journal Environmental Science & Technology, is among the first to show bioaccumulation—the buildup of chemicals in the bodies of living creatures—from oil and gas wastewater downstream of a surface water disposal facility.

“We don’t know how much of an impact this has on human health, or if it has any impact at all,” Warner said, “but this means it’s entering the food chain.” He noted that they’d like to look at the soft tissue of the mussels next, since muskrats and fish dine on freshwater mussels, but “no animals really eat the shells.”

Warner and his co-authors compared the shells of mussels from the Allegheny River that were collected both upstream and downstream of a former disposal site for fracking wastewater in Warren, Pennsylvania. They also looked at mussels from two other Pennsylvania rivers—the Juniata and the Delaware—that have no reported discharge from the oil and gas industry.

Between 2008 and 2011, more than 2.9 billion liters of oil and gas wastewater was discharged to waterways after being treated at municipal sewage facilities throughout the country. The practice was common in Pennsylvania until it was halted in 2011 after it was discovered that the small amounts of heavy metals and radioactive materials they released into the water supply were building up in sediment and drinking water. But the new research suggests the impact of the practice is ongoing.

Another recent study found elevated levels of radioactive radium in the sediment downstream of the former treatment facilities in Pennsylvania.

“I expected that we would see a big, dramatic change after 2011 when there was no more unconventional oil and gas wastewater going into that facility,” Warner said. “Instead, we saw a slow, gradual change, and the shells from the mussels downstream still haven’t gone back to looking like an upstream shell that wasn’t impacted.”

“We think the sediment acts like a reservoir for higher levels of radioactivity and metals, and that’s where the mussels live,” he added, “so this could continue to have even longer-term impacts even though that valve got turned off.”

Warner said the findings are also relevant for preserving biodiversity. “Freshwater mussels are currently undergoing a mass extinction event,” he said, “and that’s likely because of changes we’re causing in water quality.”

Warner also noted that despite having a similar, if less-concentrated chemical makeup, wastewater from conventional oil and gas facilities is still regularly treated at municipal sewage plants and discharged into rivers.

“We can see the specific signature that comes from Marcellus shale in the shells, but there’s still radioactivity and extremely high levels of salt in the wastewater that’s coming from conventional oil and gas facilities,” Warner said.

“Looking at what happens with disposal of wastewater from conventional oil and gas is just as important as fracking, at least when it comes to freshwater mussels—they don’t know the difference.”

Kristina Marusic covers environmental health and justice issues in Pittsburgh and Western Pennsylvania. Prior to joining EHN, Kristina covered issues related to environment and social justice as a freelancer for a wide range of digital media outlets including the Washington Post, Slate, Vice, Women's Health, MTV News, The Advocate, and Bustle. She lives in Pittsburgh, where she spends much of her free time kayaking the city's iconic three rivers, consuming coffee and eating adventurously.