Fossil Fuels’ Days are Numbered, Thanks in Large Part to Economics: Lester Brown

Lester R. Brown is well known for his sweeping assemblages of information to illustrate world trends, economic trends, and environmental trends. His revelations are usually sobering, if not frightening.

But along comes The Great Transition, his newest look at world trends. Today, Brown is telling a different tale. What he sees, along with his co-writers, is a rather uplifting vision: Fossil fuels are being replaced at an increasing pace by wind and solar energy. 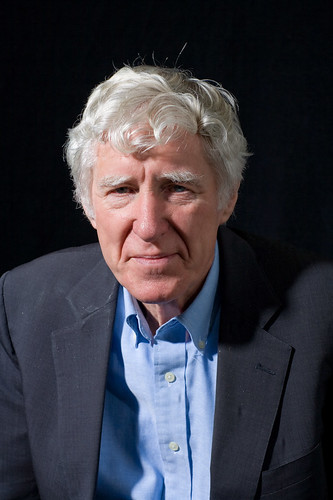 Photo courtesy of Lannan FoundationBrown says the reason solar and wind energy are growing in use
around the world has a lot to do with the economics as well.

We know, of course, that fossil fuels — coal, oil and natural gas — cause considerable environmental damage. Smog causes or aggravates many human diseases such as lung disease and heart disease, contributing to tens of thousands of premature deaths annually. Getting fossil fuels out of the ground is dangerous and causes its own set of pollution problems: coal mine disasters, black lung disease, oil spills, chemical pollution of aquifers. Since all of the easy sources have already been exploited, fossil fuels are harder and therefore more expensive to find and extract today that in the past. BP’s Deepwater Horizon blowout in the Gulf of Mexico is a clear example of the risk of pursuing what some have called “extreme energy.” Finally, fossil fuels are causing an increase in planetary concentrations of carbon dioxide, resulting in global warming that threatens humans, the crops and water supplies we depend on, and natural habitats like never before.

You would think this is reason enough to move to sources of energy from wind and solar power. But Brown says the reason solar and wind energy are growing in use around the world has a lot to do with the economics as well. The cost of wind generators and solar cells are coming down, while the costs of finding and processing more fossil fuels is going up. 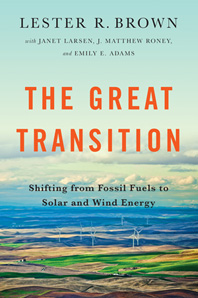 Brown notes that we are in a race with global warming trends. “Can the world’s economies move to wind and solar fast enough to avoid crossing key thresholds that could cause climate change to spiral out of control?” he writes. “Or will we continue down a dead-end street, trying to eke every last hydrocarbon out of the ground until we are all cooked?”

(As for where nuclear power fits into the picture, Brown dismisses it. While such power is “clean” in the sense of not giving off any greenhouse gases, the cost of new nuclear power is growing even faster than the cost of fossil fuels. And there is the danger of disaster, such as occurred at Chernobyl and Fukushima.)

In some cases, turning to solar and wind power is a huge financial benefit, especially in developing countries, because putting up a unit for household energy generation or small town generation avoids the need of putting in a huge and costly infrastructure including fossil fuel transport to the country, the building of fossil fuel plants, and developing the electric grid to distribute the energy around the country. Why create a whole new infrastructure when you can put up solar panels on rooftops?

The transition is not without its hiccups. The fossil fuel industry is still huge, commanding considerable political power, and obtaining huge, undeserved taxpayer subsidies.

But Brown is putting his bets on solar and wind. Not only do they make sense from an environmental and human health standpoint, but they are becoming cheaper. The fossil fuel industry is on the way out. Good riddance.