For Lesser Prairie Chicken, A New Era in Conservation or Raw Deal?

In 1904, writer and shooting enthusiast Walter Colvin first reported from Kansas on the abundance of lesser prairie chickens he found there. The lesser prairie chicken, or LPC, is a grouse-like bird of the southern plains that thrives in its heat-tolerant grasses and small shrubs. It’s a lekking species, with males gathering on communal drumming grounds, or leks, to flash their bright orange, inflatable neck pouches and dance in order to attract mates.

Colvin wrote that nearly every farmer had hundreds of prairie chickens roosting in their winter grain fields, and in one cane field near the state line, his shooting party startled a flock that, when it rose from the field, made it seem “as though a hole had been rent in the earth.” In another field, he says that his brother saw 15,000 to 20,000 chickens. 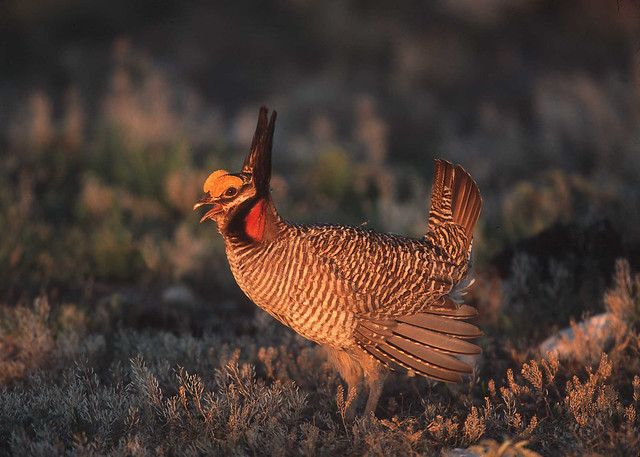 Photo courtesy of USDA NRCSThe lesser prairie chicken, a grouse-like bird was once abundant in the southern plains. Today, the bird’s population is down to about 29,000.

These numbers are especially startling when you realize that, just over a hundred years later, the total lesser prairie chicken population is only 29,000, and had, as recently as 2013, dropped as low as 17,616, largely due to habitat loss and fragmentation by roads and energy development,

This steep decline in 2013 is one reason the US Fish and Wildlife Service (USFWS) declared the species threatened in 2014. Conservation of these birds faces two major hurdles: private land development and climate change.

That USFWS listing was successfully challenged in court in 2015, leading the agency to withdraw the listing in July of this year (conservation groups submitted a petition to relist the bird in September). At issue was the Rangewide Plan for the lesser prairie chicken, a sweeping conservation agreement that has been hailed by its supporters as ushering in a new era in private land conservation and by its critics as representing a fast track to extinction.

The Rangewide Plan was unprecedented in the scale and scope of its multiagency collaboration. The brainchild of the Western Association of Fish and Wildlife Agencies, or WAFWA, it emerged in 2013 from similar, smaller-scale conservation agreements being tried in New Mexico and elsewhere. David Mehlman, the director of the Nature Conservancy’s Migratory Bird Program, describes it as well thought out and well-executed: “They put good resources to it, hired the best scientists, and were careful to reach out to stakeholders.”

A coalition of biologists, government agencies, private conservation groups, and industry representatives helped come up with the plan’s basic shape. In order to conserve remaining LPC and grow their numbers over time, the plan identifies “focal areas” of the species, and works to conserve strongholds of 25,000-50,000 acres in each. The goal is to preserve as much contiguous, connected habitat in each of the species’ four ecoregions as possible: sand shinnery oak, sand sagebrush, mixed grass prairie and short grass/mosaic prairie.

The plan’s objective is an overall LPC population of 67,000. This goal is dependent on maintaining or restoring almost 5 million acres of quality LPC habitat and improving the habitat of connectivity zones between ecoregions.

In the two and a half years the program has been active, it has ostensibly been a success. It’s raised over $61 million and preserved habitat on about 100,000 acres. The program’s managers also purchased a 30,000-acre ranch in Kansas that will provide permanent conservation in the sand sagebrush ecoregion. “It’s a blueprint for a new way of doing conservation on private land,” says Bill Van Pelt, one of the architects of the program and coordinator of grasslands conservation for WAFWA.

However, while some conservation groups have given their tentative approval, others point to major weaknesses that endanger the LPC and set a poor precedent for future efforts.

The Rangewide Plan uses a staple of private land conservation — voluntary incentives to private landowners and industry — but with a twist: it has convinced industry to pay. Companies that have signed up for its program pay an initial enrollment fee based on their size and activity, and in exchange receive a guarantee not to be placed under future regulatory burdens. They agree to abide by certain restrictions, such as reducing the size of their operations (smaller drill pads closer together, for example), siting oil wells or wind turbines based on LPC activity, and marking fences so that prairie chickens don’t run into them as much. 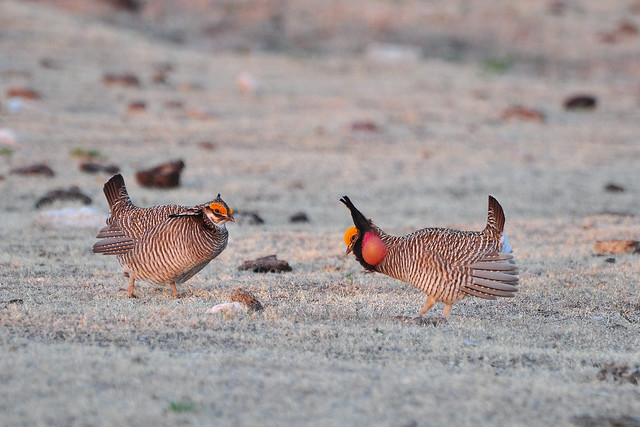 Photo by Larry LamsaTwo male lesser prairie chicken face off. Most of the 100,000 acres protected under the program are conserved only under temporary contracts.

Activities that impact good habitat are charged accordingly, and industry experts say that the costs are prohibitive. Those activities aren’t banned, however, and this is one of the Nature Conservancy’s main concerns about the plan. “We’d prefer to see strict avoidance [of focal areas],” says Mehlman.

Another concern among wildlife advocates is the reliance on “term” conservation instead of permanent conservation. Most of the approximately 100,000 acres protected under the program are conserved only under temporary contracts: Landowners are being paid to manage their land for the LPC just for the time being, with no obligation to continue once their contract is up.

Other concerns are more serious. The Defenders of Wildlife point to a lack of transparency about what is actually being preserved, as well as failure to follow through on some of its promises. Others are skeptical of the entire premise. “This is the same old government conservation that doesn’t work,” says Wayne Walker, principal of the environmental consulting group Common Ground Capital and one of the original contributors to the Rangewide Plan; he is now one of its biggest critics.

These criticisms have some merit. Two and a half years after it went into effect, industry enrollment in the plan has dropped by more than a tenth, permanent conservation has not met predetermined benchmarks, and significant habitat restoration — a key element in a species decimated by habitat fragmentation — remains in flux. Payments to private landowners have proven less enticing than originally hoped, making it more difficult to conserve ideal habitats.

Jason Rylander, an attorney with Defenders of Wildlife, points to several discrepancies between the plan’s original goals and the goals as stated in subsequent annual reports. For example, the 2013 Rangewide Plan states that its restoration goal is 88,000 acres a year over the four ecoregions, plus 2,700 acres of cropland converted to grassland. By 2015, the plan had achieved only a fraction of that, with brush treatment on just over 8,000 acres, with another 7,000 under contract, and no cropland conversions. Furthermore, Rylander says that the plan currently spends only a quarter of its budget on conservation — the rest goes toward overhead costs.

What about that recent land acquisition in Kansas? A Western Association of Fish and Wildlife Agencies news release says that it is “high-quality lesser prairie chicken habitat,” but Rylander says that the quality has not been able to be independently verified. According to USFWS, a 20,000-to-50,000-acre stronghold needs to have 6 to 10 leks with at least six males per lek. He says that aerial surveys conducted by a third party in 2015 seemed to indicate that the property did not meet this standard, with only two leks visible from the air. Additionally, this property is not in an area identified as a stronghold of the species. “It’s hard to tell how it is benefitting the lesser prairie chicken,” says Rylander.

And what about the WAFWA plan as a model for conservation moving forward? Both Mehlman and Clay Nichols, a biologist with the USFWS, stress that while the plan is promising, a thorough analysis is necessary to declare the plan a success. Environmentalists are more skeptical. “Voluntary incentivized conservation is very seductive, both to government and to industry,” says Rylander. “But do these programs really work?”

A recent paper by the University of Pennsylvania Law School and Harvard examines the effect of voluntary conservation programs on industry behavior. The authors find that most programs do little to improve conservation unless there is the threat of regulation to back them up. That doesn’t bode well for the 2015 decision to substitute the Rangewide Plan’s conservation activity for actual listing of the lesser prairie chicken. Three conservation groups, WildEarth Guardians, Defenders of Wildlife, and the Center for Biological Diversity, noted that there is no evidence that this plan is helping the species in their recent petition to restore federal protections for the bird.

“If this is the new normal,” says Wayne Walker, “Then we’re on the fast track to extinction.”