Do you have one of those jobs where you feel like the future of your country rests on your shoulders? I do. I’m not a politician or a soldier, but I am my country’s Climate Change Officer. I’m 32 and for the past 10 years I’ve worked on the frontline of our biggest security challenge — a changing climate that will bring us more monster hurricanes like Irma, more frequent floods and droughts, sea level rise, and other threats to our very survival. 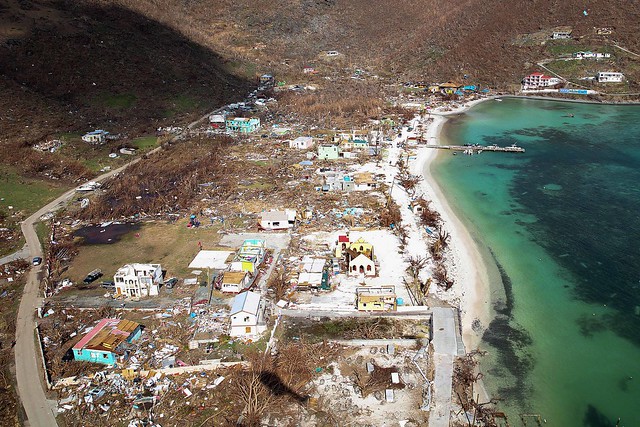 It’s ironic that my life has taken this path. In fact, I distinctly remember walking out of my first lecture on climate change at Brandeis University thinking: “It doesn’t seem that bad and it doesn’t have that much to do with me.” Images of polar bears and melting icecaps served to make the issue feel distant and far away.

My journey as a climate change leader and advocate began in 2008. I had just started my appointment back home with the Government of The Virgin Islands when an email came from the Caribbean Community Climate Change Centre asking for urgent assistance in organizing a local training workshop in conducting climate change vulnerability and capacity assessments. The enthusiastic graduate that I was, I took up the challenge. As it turns out, the workshop was the beginning of a much wider four-year regional project, and by volunteering, I became the de facto “climate change girl” and the local project lead.

It was the first climate change project ever implemented in the British Virgin Islands. Under the mentorship of Dr. Ulric Trotz, the climate change center’s deputy director and science advisor, and other regional leaders, I had the privilege of spearheading a successful public education campaign, establishing a National Climate Change Committee, conducting a vulnerability and capacity assessment of our tourism sector and writing a climate change policy for the islands that became a regional model. Before the project ended, climate change had become a part of the local vocabulary and political buzzword and I had learned that climate change has everything to do me with me and my future. That realization changed my life. I started to appreciate climate change as our biggest national security threat and the understanding came with a lot of responsibility.

Work was not just work — it was a commitment to the future of my country. In my mid 20s at the time, I remember the weighty feeling that the future of The Virgin Islands rested squarely on our ability to successfully adapt to climate change. In those very early days of the program, I was basically a one-woman band. Pushing the climate change agenda meant long days at the office and regular weekend shifts. While focusing on local efforts, there was the reminder every now and then that, no matter what we did to adapt our future was ultimately in the hands of others. Small islands as a global collective emit less than 0.2 percent of the greenhouse gases that cause climate change and, as such, behind the professional were the raw emotions in response to decisions on the global stage.

In particular, I remember the whirlwind emotions of 2016 — the feeling of great joy and hope when in September, under President Obama’s leadership, the USA officially joined the Paris Agreement, and then actually crying that November when climate change-denier Trump was announced as President-elect. The hope I had of the world finally seriously tackling the climate crisis was dashed. We couldn’t afford another four years of inaction. Our efforts felt almost in vain and our future very uncertain.

Nonetheless, July 2017 was an exciting time for our program. After an eight-year haul to see it established, we had finally appointed the first Board of Trustees of The Virgin Islands Climate Change Trust Fund — an independent entity that would raise, administer, and distribute alternative sources of international funds to support adaptation and mitigation projects locally. It was the first of its kind in the Caribbean and created of necessity. As an Overseas Territory of the United Kingdom, we find ourselves in a peculiar position — vulnerable small islands like any other Caribbean country, but unable to access the Adaptation Fund, the Green Climate Fund and other well-established international climate funds under the United Nations Framework Convention on Climate Change. We had also just completed two critical community adaptation projects — a coastal defense and drainage improvement project led by the Organization of Eastern Caribbean States (OECS) Commission and funded by the European Union.

Then, a few weeks later, everything changed.

On September 6, 2017, we experienced a direct hit by Category 5 Hurricane Irma, the strongest hurricane at time of landfall in the history of the Atlantic. The aftermath literally resembled a post-bombing scenario — we had lost lives, homes, history, critical natural assets, and the equivalent of decades of development. Irma elevated climate change to a whole new level of personal and urgent – for the first time it really hit me that I could actually become a climate refugee.

I knew Irma was just a glimpse of our scary future, and there was a real possibility that a hostile climate could eventually make the islands I have always cherished as home uninhabitable. In fact, Professor Kerry Emanuel and his colleagues at MIT’s Lorenz Center estimate that the annual probability of an Irma-type hurricanes near my country has increased exponentially from 1 in 800 in 1990 to 1 in 180 in 2017, and will increase further to 1 in 60 by 2090 if we do nothing about climate change.

The feeling of extreme vulnerability last summer wasn’t driven by Irma alone. Exactly a month before, at the height of our traditional dry season, we had one of the worst floods in our history. Then there was the terror brought by the near miss by Category 4 Hurricane José just three days after Irma and the actual strike of a second Category 5 hurricane, Maria, just two weeks on as we still sat in our shambles.

The experience of last summer made one thing very concrete for me: If I wanted a future for The Virgin Islands I had to do more; acting on the local stage was not enough. We simply can’t adapt our way into safety; the world must act urgently on climate change. And so I felt compelled to capture and share Irma survivor stories in the hope that they would wake up the world by allowing people to connect on a very human level to climate change and what it means for those on the frontlines.

Writing The Irma Diaries — a 200-plus-page account of our unprecedented experience based on interviews of 25 survivors — required sleepless nights and daring risks. I wrote while working full time and living in a disaster zone. Lack of electricity at home for six months post Irma forced me to write by hand by candlelight and, eventually, to stake out at the local sewage treatment plant until wee hours of the morning for a source of power for my laptop. These late-night escapades meant breaking the military-imposed curfew on a nightly basis, sneaking home, and being stopped one too many times by police with drawn machine guns. The long hours and risks were necessities however. I believed our stories were powerful and needed to be shared with the world urgently. The book was published in December 2017.

Today, I have hope again. Reactions to The Irma Diaries have been heartening; I’ve seen people truly moved by our experience. Meanwhile, fossil fuel divestment movements across the world are still going strong, countries like Germany are well on their way to a transition to renewable energy, and in the US, states like California and New York are bypassing Trump and taking the lead on tackling climate change. Today, more than ever, I believe in the message delivered in my TedEx Talk, “How Hurricane Irma Can Save our Future” — I believe sharing our stories in a way that connects the dots to climate change and inspires action can help save our future!

As I continue my journey, I am less worried about who is the US president and more concerned about using the power of frontline experiences to help the world “connect, care, and act” on climate change.

Angela Burnett has served as the Climate Change Officer for the British Virgin Islands for the past 10 years and has been involved in vulnerability assessments, policy development, adaptation projects and sustainable climate financing. As a Hurricane Irma survivor, she is now committed to global advocacy on climate change using her book The Irma Diaries as a platform.