Five Years after the BP Deepwater Horizon Disaster, Oil Spills Are on the Rise

Offshore and onshore, oil and gas operations and transportation appear no safer than before
Elizabeth Grossman

Five years after the BP Deepwater Horizon blowout in the Gulf of Mexico sparked national outrage, oil spills remain a routine occurrence across the United States. Yet many receive little — if any — national attention. The enormity and unprecedented scale of the BP disaster demanded a federal emergency response and captured daily headlines for months. But oil spills and pipeline ruptures occur daily – as they have nearly every day since the Deepwater Horizon exploded on April 20, 2010. While many are relatively small in comparison, they still pose threats to public safety, health, and the environment. 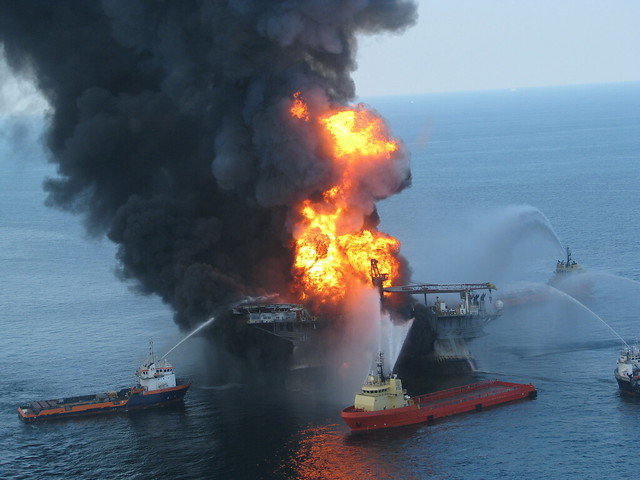 Photo by Ideum - ideas + media, on Flickr The Deepwater Horizon offshore drilling platform on fire following the explosion of the Macondo oil well. The federal government estimates that 4.9 million barrels of oil spilled into the Gulf of Mexico before the well was capped.

The images and details of the BP Deepwater Horizon episode are unforgettable. On the evening of April 20, 2010, the Macondo offshore oil well located almost a mile under the sea surface and about 50 miles southeast of Venice, Louisiana exploded, killing 11 of the 126 workers on board the drilling platform and critically injuring three. The cataclysmic explosion unleashed what’s considered to be the largest accidental release of oil in US history. By the time the well was capped and the underwater flow of oil stopped on July 15, at least 3 million and perhaps nearly 5 million barrels of oil had spilled into the Gulf of Mexico, affecting more than 350 miles of coastline form Louisiana to Florida. (The estimates vary depending on source but the federal government estimate is 4.9 million barrels, or almost 206 million gallons.) Five years later, the impacts of the oil and the measures deployed to contain and remove it — on fragile wetlands and barrier islands, beaches, marine wildlife and on coastal communities and those involved in the oil spill cleanup — are still being felt and tallied.

One might think that such a catastrophic event would have put a damper on US oil and gas production and forestalled additional spills and other unintentional fuel releases. Neither has happened despite political leaders’ pledges to prevent future accidents and rethink US reliance on fossil fuels.

On June 15, 2010, speaking from the Oval Office in a nationally televised address, while crude oil continued to gush from the Macondo well, President Obama said: “The third part of our response plan is the steps we’re taking to ensure that a disaster like this does not happen again…. One of the lessons we’ve learned from this spill is that we need better regulations, better safety standards, and better enforcement when it comes to offshore drilling.” The president also promised to wean America off of oil, declaring, “For decades, we have known the days of cheap and easily accessible oil were numbered. For decades, we’ve talked and talked about the need to end America’s century-long addiction to fossil fuels…. The tragedy unfolding on our coast is the most painful and powerful reminder yet that the time to embrace a clean energy future is now.”

As part of the Deepwater Horizon response, the Obama administration imposed a temporary moratorium on offshore, deep water oil drilling that lasted from July until October 2010. Since then, however, US oil and gas production has grown steadily — largely as a result of hydraulic fracturing and shale gas extraction. US offshore oil production in the Gulf of Mexico declined immediately following the BP disaster but has begun to rise again in the past two years. And since 2012, the US has been the world’s largest producer of petroleum and natural gas. In 2014, the US produced nearly twice as much of these fossil fuels as did Saudi Arabia.

Over the past five years, what happened on the BP Deepwater Horizon and the hazards of offshore oil extraction have been much scrutinized. And last week, Secretary of the Interior Sally Jewell proposed new rules aimed at improving the safety of offshore drilling. But those new regulations — when implemented — will only address one source of the ongoing rash of US oil- and gas-related accidents.

For along with growing US oil and gas production has come a steady stream of incidents that have released millions of gallons of oil, gas and other petroleum products into the environment, often with disastrous results. Among these are pipeline ruptures, train derailments that have caused explosions and fires, and incidents at offshore drilling platforms and wells, along with barge or other collisions, including in the Gulf of Mexico.

But hard numbers on these incidents are difficult to come by. The federal government and state authorities have only a partial grasp on how often these incidents occur and how much oil, gas or other petroleum products and related fluids these events release.

Although it seems incredible, there is no comprehensive national list of oil spills — from any government source.

The Bureau of Safety and Environmental Enforcement, the federal agency that oversees offshore oil and gas operations, maintains a list of “incidents.” Although this list includes “collisions” as well as oil released from wells, it does not, for example, include last year’s oil tank barge collision in Galveston Bay that spilled nearly 170,000 gallons of oil.

No record of spills from onshore oil and gas operations is maintained by any single federal agency. The Bureau of Land Management requires reporting of “undesirable events” — that is, spills — from oil and gas operations on federal and tribal lands. But these reports are sent to field offices and not readily accessible. Other onshore spill records are maintained by individual states.

E&E’s EnergyWire noted last year that while there was a 17 percent increase in incidents between 2013 and 2014, these records are considered “an undercount” and not all states make this data available. In the top 15 oil and gas producing states, EnergyWire tallied at least 7,662 spills or other releases in 2013, up from 6,546 in 2012. That brings the 2013 total to about 20 such incidents per day that, combined, released some 26 million gallons of oil and related fluids.

When it comes to pipeline ruptures and spills, the Pipeline and Hazardous Materials Safety Administration does maintain a list of incidents. But the database does not work with all web-browsers, so details on these incidents — including cause and any information about volume and type of fuel spilled — is not readily accessible. Between 2010 and 2014, however, the PHMSA lists 3,072 incidents involving gas or other hazardous liquids. So far in 2015, the agency lists 189 such pipeline incidents. According to the PHMSA, altogether — from 2010 through 2015 — these incidents caused 81 deaths, 378 injuries and more than $2.8 billion in property damage.

These numbers mean that there has been, on average, more than one pipeline incident a day since the beginning of 2010 — a number that has remained fairly steady since 1995. While many are no doubt small in volume, some pipeline spills are quite large. For example, according to one EPA estimate, the 2010 Kalamazoo River pipeline rupture spilled more than 1 million gallons. And a pipeline break earlier this year sent 30,000 gallons of oil into Montana’s Yellowstone River.

The Pipeline and Hazardous Materials Safety Administration also tracks incidents that result in oil spilled during transport of fuel (and other hazardous materials) by truck and train. According to an analysis of this data by the Center for Biological Diversity (CBD), the number of railroad shipments of oil and petroleum products grew from about 9,500 rail cars of oil in 2008 to more than 400,000 in 2013, a more than 40-fold increase, with an additional jump of about 9 percent in 2014. As this number has climbed, so have accidents and spills.

According CBD, in 2013 there were 117 oil spills from trains in the US that, together, dumped more than 1.1 millions of crude. That figure is more than all of the oil spilled from trains between 1975 and 2012. And in 2014, there were more than 140 such “unintentional” releases of crude oil. These derailments have continued in 2015. As of the first week in March, there had been four oil train derailments in the US. But, as with the pipeline and onshore well operation spills, this data can be difficult to access and compile, and what’s accessible is not necessarily comprehensive.

As for offshore drilling incidents, between 2010 and 2014, the Bureau of Safety and Environmental Enforcement (BSEE) reports 3,410 such incidents, all but 327 of these in the Gulf of Mexico. Twenty-three people died as a result of these incidents, a number that includes the 11 killed on the Deepwater Horizon. Another 1,348 were injured — including the 26 in the Deepwater Horizon explosion and fire. When it comes to the volume of oil spilled offshore, this is harder to calculate based on BSEE summaries as what’s posted does not include all such incidents. For example, the numbers available do not include the Deepwater Horizon release or the 170,000 gallons dumped in the Galveston Bay barge collision. And as an AP investigation published this week suggests, what is reported may underestimate volumes actually released. (AP discovered that one ongoing offshore well leak released approximately 16,000 gallons over the past seven months and at least 4,500 in 2013, volumes not reflected in the BSEE database.) Yet again, these numbers suggest an average of nearly two offshore oil and gas industry incidents per day — down from almost three per day between 2007 and 2009.

So five years after the BP Deepwater Horizon disaster, the US remains awash in oil and gas. Production is at an all time high. At the same time — despite assurances from President Obama and other administration officials — the industry appears to be no less prone to accidents and unintentional releases of liquid fossil fuels. And despite the enormous scrutiny of offshore oil and gas operations the BP Deepwater Horizon disaster prompted, we seem to be without any official, comprehensive accounting for industry incidents and the oil and gas spilled.

When she announced the proposed new rules for offshore drilling, Secretary Jewell said: “Both industry and government have taken important strides to better protect human lives and the environment from oil spills, and these proposed measures are designed to further build on critical lessons learned from the Deepwater Horizon tragedy and to ensure that offshore operations are safe.”

With even incomplete estimates, energy industry “incidents” have clocked in at more than one oil or gas spill of some kind per day during the last 5 years. It seems there are still big strides to be made.