Scientists are discovering new carbon sinks in volcanic forearcs and desert aquifers, and adding to the story of Earth’s carbon cycle.
Rachel Sturges

For two weeks in February of 2017, an interdisciplinary team of scientists led by geochemist Peter Barry of Woods Hole Oceanographic Institution dipped sampling containers into naturally flowing streams, siphoned water into vessels to filter out microbes, trapped gas in flasks, and swiped bugs from their faces and legs. Affiliated with the Deep Carbon Observatory, these scientists worked, heads down, in the shadows of several volcanoes in Costa Rica, collecting water samples near active faults, where Earth’s crust had recently split to form fast-moving streams and hot springs. As magma-heated fluid mingled with cold creeks, and as microbes painted rocks pink and orange, the team looked for clues to the deep carbon cycle. What bubbles to the surface of hot springs can say a great deal about what is happening below. 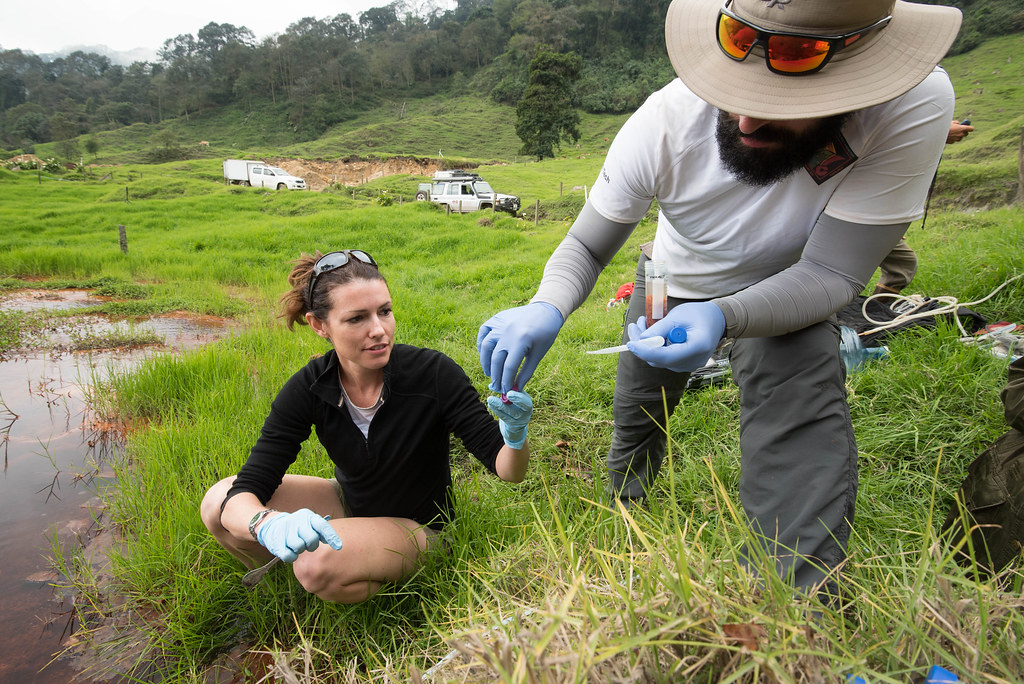 Microbiologists Karen Lloyd and Donato Giovannelli collect samples from a hot spring on the flanks of Irazú Volcano in Costa Rica for the Deep Carbon Observatory. Photo by Tom Owens.

To measure the amount of greenhouse gases in the air, scientists have been installing carbon observation systems on mountain tops and hillsides for over sixty years. They’ve looked at both natural and anthropogenic sources, tallying up the exhalations of volcanoes and the fumes rising from the stacks of power plants. But researchers haven’t always been able to easily pinpoint carbon “sinks,” places that absorb more carbon than they release. While much of the carbon dioxide emitted by the combustion of fossil fuels finds its way into the atmosphere and the oceans, roughly 25 percent ends up elsewhere, sequestered in forests, peatlands, even on icebergs, all part of the planet’s balancing act with volatile gasses.

But scientists are now learning about places deep underground where sequestered carbon hides.

On the last day of their expedition, the Deep Carbon Observatory team approached the top of Poás Volcano, crossed a guard rail, and stumbled down into the mile-wide crater. They took samples of rainwater that had turned into pure acid around the blue-green lake, and smelled the rotten-egg scent of sulfur. They had been tracing the contour of the volcanic arc — a line of dozens of volcanoes, six of which are still active — which forms the spine of Costa Rica, to this place on the lip of one of the largest natural exchanges of gases from Earth’s interior to the atmosphere. Months later, the volcano would erupt, turning the entire lake into vapor.

For Barry and some of his team members, there was still months of work ahead in the laboratory looking at the isotopic composition of fluid and gas samples before they confirmed any findings. In the end, they had found geochemical evidence of a carbon sink in the forearc, the stretch of land between the arc of the volcanoes and the oceanic trench, where one slab of crust sinks below another on its way deeper into the mantle.

This carbon sink is different than the ones scientists usually talk about. Barry wasn’t looking at how carbon is pulled from the atmosphere. Instead, in the crust beneath the forearc, volatile subterranean gases escaping from Earth’s mantle were being filtered, and what reached the surface in seeps along faults and sometimes welling up in grassy fields, bore an isotopic signature of what had been lost along the way — carbon. The missing carbon, caught in veins of calcite won’t make it to the atmosphere, possibly for thousands of years, Barry told me. 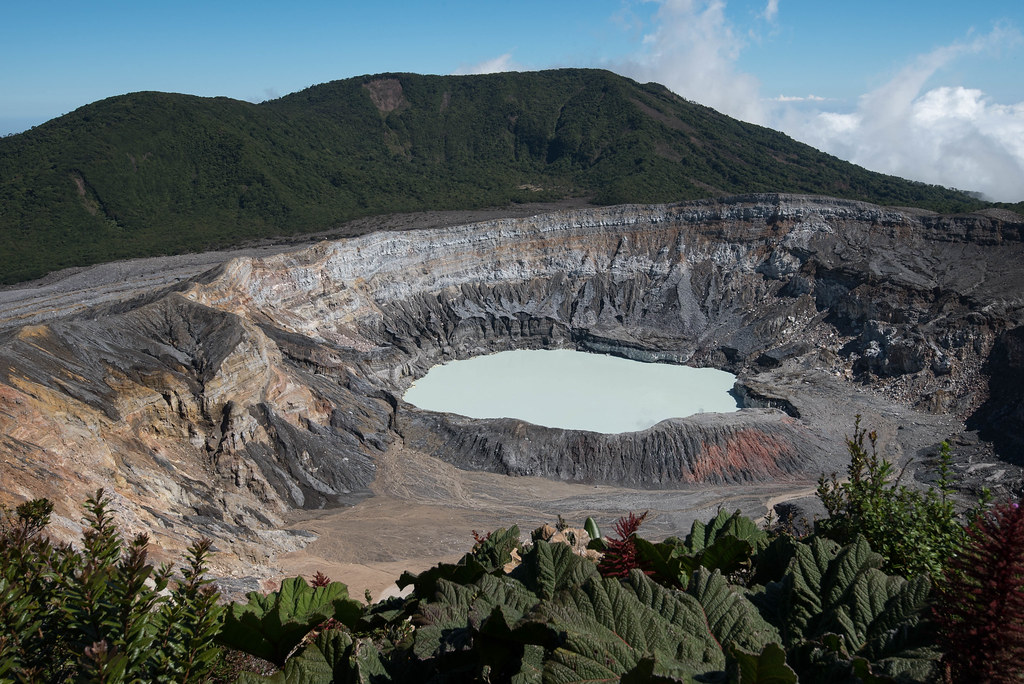 View of the acidic blue-green lake in the crater of the Poás Volcano in Costa Rica. Photo by Tom Owens. 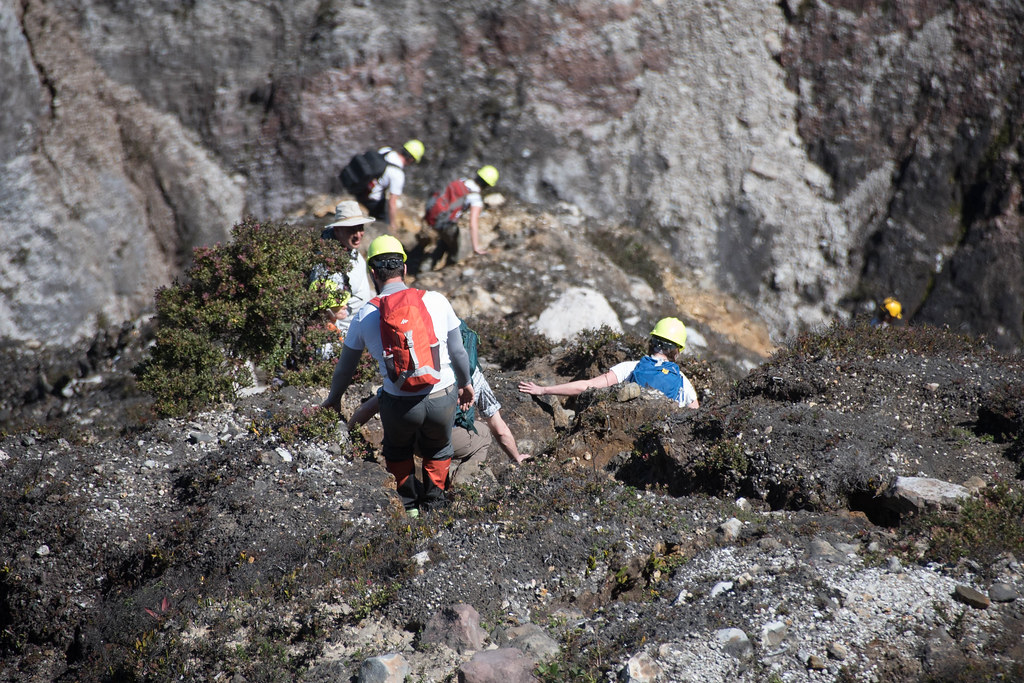 An interdisciplinary team of scientists from the Deep Carbon Observatory descends into the mile-wide crater of the Poás Volcano in Costa Rica. The researchers found geochemical evidence of a carbon sink in the volcano’s forearc. Photo by Tom Owens. 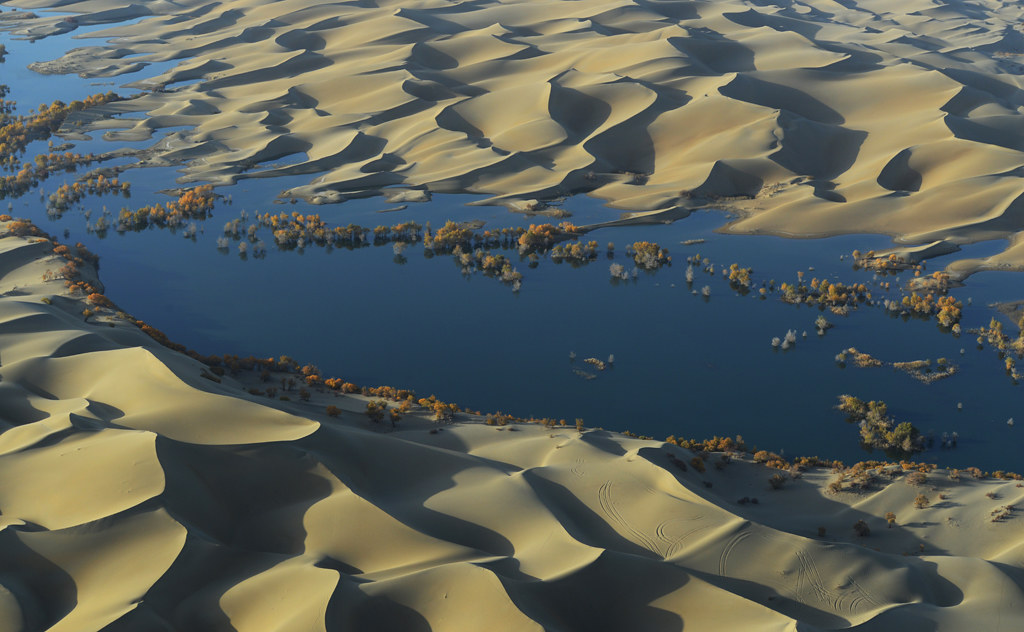 A river in the Tarim Basin in China. With almost no precipitation in the region, and high rates of evaporation, the soil turns salty, dissolving increasing amounts of carbon from the atmosphere with the next rush of water. Photo by Yan Li.

Terry Plank of the Lamont-Doherty Earth Observatory of Columbia University, who did not contribute to Barry’s study, called his research on subduction zones in the forearc region “unique.” She told me in an email that most scientists studying “carbon output” in these areas focus on volcanoes, where carbon release is “most visible and violent.” However, Barry’s research in the emergence of “‘stealth’ carbon” in springs hadn’t “really been recognized nor quantified” in the past.

“Specific regions like Costa Rica are a ‘natural laboratory’ because they allow us to test certain parameters that might not be expressed elsewhere,” Plank said.

On the other side of the planet, scientists have also been following the path of carbon through a very different landscape. Almost a decade ago, in the Tarim Basin in China dominated by the Taklamakan Desert — sometimes referred to as the “Sea of Death” — desert ecologist Yan Li began sampling the water that flowed into the desert from distant mountain-top glaciers. This water courses to the desert basin in rivers and gets diverted into irrigation channels in farms that surround oases. What’s left ends up in rivulets and runnels, a mere trickle through the desert’s most famous nearly dry alluvial fan that stretches across kilometers.

When Li, who is currently at Zhejiang Agriculture and Forestry University, first began measuring the carbon flux in the region in 2005, he saw signs of a carbon sink. In this case carbon was being drawn from the atmosphere. He thought by the soil. After all, the drifting saline expanse was capable of reacting with the atmosphere, and he began to think of it as “a dry ocean,” as he told Science in 2008. At night, while Li slept, the soil seemed to take in even more carbon dioxide. Although he could measure the carbon flux above the alkaline soil, at the time he couldn’t pinpoint where the carbon was stowed away, and in what form.

He knew the soil played a role, but what about water? When water flows down from mountains, at the edge of the basin, oases form. With almost no precipitation, and high rates of evaporation, the soil turns salty, dissolving increasing amounts of carbon from the atmosphere with the next rush of water, even more so when farmers in nearby settlements overirrigate the land. What doesn’t evaporate in the irrigated land, sinks down, down, down into the salty aquifers of the desert basin.

Li’s team learned that this carbon capture intensified in the Tarim Basin when the Silk Road opened up over 2,000 years ago and farming expanded in the region, and he told me in a recent email that he thinks the process is increasing again today as more wells are drilled for irrigation.

Li also used carbon-14 dating to determine when the carbon was last in the atmosphere. Near the center of the desert, deep in the briny aquifer, the team found the water contained carbon that was possibly over 10,000 years old, trapped since around the start of the Holocene.

Richard Houghton of Woodwell Climate Research Center at Woods Hole and a co-author on Li’s study, told me through email that although this is a relatively small carbon sink and not widely accepted by scientists, it is worth considering. He included the study in a round-up of processes found to remove carbon from the atmosphere published last year in Global Climate Change Biology.

Houghton also pointed me to a new study in Science that came out in the middle of December that warns that plants might be on the path to becoming less efficient at absorbing carbon dioxide and mitigating against climate change. This might make carbon capture that relies on things like sand and stone, and other unusual carbon sinks, even more important.

Across the world, scientists are continuing their exploration of the complex, often surprising, world of carbon and — as University of Tennessee microbiologist Karen Lloyd said in a short documentary about the field expedition to Costa Rica — finding “out new things about nature that no one ever knew before.”

Rachel Sturges is a science writer from Canton, NY. She is working on a collection of essays called Backyard Studies.