A short film about the life of a Wyoming cougar named F61 and her three spotted kittens has been going viral on the Internet. Released on Vimeo on March 1, The Secret Life of Mountain Lions provides a rare and intimate glimpse into the family lives of America’s second-largest cats.

Based on footage gathered over the years by the conservation group Panthera’s Teton Cougar Project, the film debunks long-held perceptions of cougars as solitary, anti-social animals. Instead it reveals a cat family that is playful, affectionate, and interdependent, and shows how certain behaviors are passed down from one generation to the next. For instance, it shows how young kittens learn from interactions with their mother and siblings, exhibiting behaviors like stalking, caching and sharing meals from an early age. The footage also shows that sometimes, adult female cougars adopt orphaned kittens that would otherwise perish.

The Teton Cougar Project has been researching the life of cougars in Wyoming’s rugged mountain terrain since 2000 by placing motion-triggered cameras at cougar dens, feeding sites, and other hidden locations. The volume of footage it has amassed is naturally enormous. “We had to look through to what amounts to 17,000 feet of footage for the film,” says Sharon Negri, the film’s producer.

Negri, who is the director of WildFutures, an Earth Island project that works to advance carnivore and ecosystem protection, has been working to protect mountain lions for three decades. The film is her brainchild.

“I have walked the halls of the Capitol, lobbied fish and game commissions and helped pass the initiative banning the trophy hunting of mountain lions in California, but with every success, it’s been a couple of steps forward and a few steps back,” she says.

Indeed, cougars in the United States have had it rough. Overhunting and habitat loss led to the extermination of these large cats from most of the American east by the early 1900s, except for a small population in Florida, reducing the cougar’s range across North America to one-third of its original size. Thankfully, due to conservation efforts and bans of cougar bounty-hunting, mountain lion populations have been slowly rebounding since then. But, as Negri points out, many threats remain. 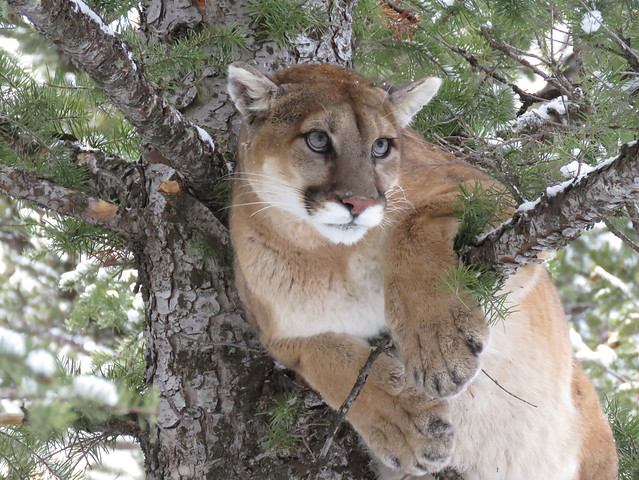 For one, cougars continue to be legally hunted in 16 western states. “In the last decade 29,000 mountain lions have been killed by hunters, in these states,” says Negri. “And that doesn’t even account for kitten mortality and trapping or car collisions and other sources of inter-species killing.”

Here’s the thing about kittens and mothers, Negri explains. States that allow trophy hunting have restrictions on killing pregnant female cougars or mothers who are accompanied by kittens with spots (an easy way to identify infant mountain lions who are still dependent on their moms). But when mother lions are out hunting, they don’t take their kittens with them. And it’s very difficult for hunters to identify lactating mothers. So when these mothers are killed, their kittens die of starvation.

Some states like Colorado require hunters to take an online course that should help them identify female cougars from male, but even with training it’s hard to ID females from males, especially when they are being chased by a pack of hounds and seek refuge in a tree, Negri says.

“Because females are so critical to the species survival, they are called the ‘biological bank accounts’ for the population,” Negri says. “You kill off the female and the population declines.” Unfortunately, female mountain lions are either pregnant or with litter for about 73 percent of their adult life. Wildlife groups are now trying to press for legislation that would strengthen protections for mountain lion kittens and females.

Apart from these, one of the most enduring threats to mountain lions are age-old myths that perpetuate fear of these animals. “While most of the public loves these animals there’s also a fear of them fueled by these myths and what they hear in media,” Negri says.

Which is why Negri made this film. She wanted to “create a new way for the public to connect with the mountain lion’s true nature” — one that would allow people to see and empathize with the more compassionate and caring side of these animals. Negri was inspired to do this after she came across an interview of Jane Goodall, where the famous primatologist and animal rights activist said that videos were a powerful tool for helping change perceptions about animals.

Negri produced the video as a creative commons product — as a tool people interested in protecting mountain lions could use freely. “I created it so that organizations and individuals and use it and make it go viral,” she says. “ I know from social media that it’s got a response that’s beyond what we expected, and that’s been very exciting.”

To learn more about what you can do to help protect mountain lions go here.