23.8 million acres of leases in Gulf of Mexico are being auctioned today amid protests from community activists and environmentalists
Zoe Loftus-Farren

This morning, the federal Bureau of Ocean Energy Management will auction 23.8 million acres of oil and gas leases in the Gulf of Mexico. Today’s sale is the agency’s first attempt at auctioning oil and gas leases using an online, livestream auction format, eliminating in-person observation by the public. 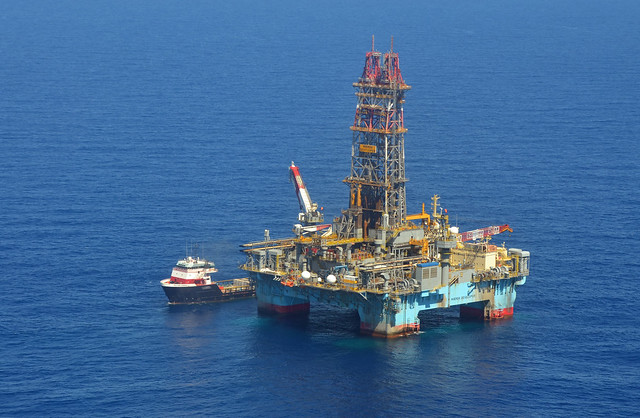 photo by JournoJen, on Flickr An oil rig in the Gulf of Mexico. BOEM is auctioning 23.8 million acres of oil and gas leases in the Gulf today.

Environmental activists say this move to an online system is aimed at stifling the public’s ability to protest at the auction. They see it as a response to the nationwide Keep it in the Ground campaign, which works to stop new fossil fuel lease sales, and has targeted BOEM’s offshore oil and gas lease auctions, as well as onshore auctions held by the Bureau of Land Management. Indeed, BOEM admits that the change is, in part, a response to recent events.

The agency was the target of protests back in March too, when hundreds of Gulf Coast residents showed up to an auction at the New Orleans superdome protesting the lease sale of 43 million acres in the Gulf of Mexico. BOEM says the move to an online system was largely about efficiency — as well as, ahem, “to help BOEM minimize its carbon footprint” by reducing travel.

But, responding to questions by email, the agency admitted that mounting protests factored into the decision, claiming that “recent events have demonstrated that some modifications to the lease sale process are warranted… to ensure the safety of employees.”

“They are trying to hide from our movement,” says Blake Kopcho, an oceans campaigner with the conservation nonprofit Center for Biological Diversity. “We have shown up at every BLM and BOEM fossil fuel auction over the last year since we launched this campaign… And I think the [Obama] administration really dislikes the attention that we are bringing to the fact that, in the emerging climate crisis, the federal government continues to offer up our public lands and waters for pennies on the acre to the most profitable industry in the history of the world to continue to burn fossil fuels.”

Advocates in New Orleans, home to BOEM’s Gulf of Mexico and Atlantic regional office, have been fighting the agency’s decision. “The move from a public to online auction is corporate manipulation, and I believe it was done to diminish the voices of the people in the Gulf,” says Jackie Antalan, a fourth generation Gulf Coast native and long-time quality of life advocate.

Last Saturday, hundreds of protesters came together in a Gulf Day of Interdependence, marching through the streets of New Orleans to protest yet more leasing of their offshore resources. (About 96 percent of US offshore oil and gas production occurs in the Gulf of Mexico.) And on Tuesday, four protestors were arrested when a group of activists delivered a petition to the BOEM offices urging the agency to stop the sale.

The protesters are not asking for an end to all drilling. Rather, they are calling for an end to new lease sales by the federal government so that we can limit global warming to the 1.5 degree Celsius target adopted at the Paris climate talks last year.

“We understand that the oil industry and the fossil fuel industry is here, and what is currently here, we have to live with for the next 25 or 30 years,” Antalan says. But, she adds, “Our health, our communities, our welfare, and our way of life has been and continues to be destroyed because of these [extractive] practices. And they’re not necessary in order for America to be progressive and a leader in the world.”

The protests that kicked off in New Orleans on Saturday have quickly evolved into a broader week of organizing and action, drawing social, racial, and environmental justice advocates from throughout the Gulf Region. The “week of resistance, solidarity, and love,” as it is being called, has expanded into a larger discussion of systemic injustice and oppression, including police brutality and mass incarceration.

The mass actions have taken on new urgency in Louisiana in the aftermath of a 1,000-year flood event last week. The flooding damaged more than 60,000 homes and killed 13 people. As President Obama toured Baton Rouge on Tuesday, protesters held posters that read “More Drilling = More Floods,” alluding to the connection between climate change and extreme weather events. A report released yesterday by EcoShift Consulting and a coalition of environmental and Gulf Coast community groups estimated that burning all the fossil fuels under as-of-yet un-leased federal waters in the Gulf would release roughly 32.8 billion tons of carbon dioxide into the atmosphere. That’s equivalent to the emissions from running 9,500 coal-fired power plants for a year.

BOEM isn’t the only federal agency moving its business online. In late July, the Bureau of Land Management announced that it would be holding it’s first online oil and gas lease sale since 2010, when the agency held a trial online auction. The upcoming sale, to be held on September 20, will offer up 4,400 acres of public lands in Mississippi and Kentucky.

Randi Spivak, director of the Center for Biological Diversity’s public lands program, notes that the BLM has had the authority to hold online auctions for several years. Based on congressional testimony and the oil and gas industry, she thinks the decision is coming now due to “the tremendous push back that the oil and gas and federal leasing program” is facing.

Not too long ago, people didn’t pay much attention to the BLM auctions, she says, but Keep it in the Ground rallies across the country — including in Alaska, Colorado, Utah, Wyoming, and Nevada — have drawn attention to them. “When we started administratively commenting and protesting, as well as getting the public to rally inside and outside these auctions, that really pulled the curtain back on the fact that there’s this oh-too-cozy business going on of selling off our public lands, wildlife habitat, and the public fossil fuels beneath them.”

Spivak notes that President Obama has the authority to act without Congress to end new fossil fuel leases on public lands. And environmentalists and community activists seem prepared to continue the fight until he, or his successor, does so.

“We are going to get louder, there are going to be more of us, we are going to get stronger, until we get real recompense for the violence that is being perpetuated in our communities,” says Cherri Foytlin, state director of environmental nonprofit Bold Louisiana, whose house was damaged in the recent flooding. “There will come a point [when] we will be heard. As long as they continue to close their ears and turn away from us, the more we’re going to do things to be seen and to be heard. That’s a guarantee. That’s a promise.”