A federal judge yesterday overturned Kauai’s new law regulating the transgenic seeds industry on the Hawaiian island, ruling that it was preempted by state law and was therefore invalid. The ruling is a setback for activists and citizens fighting to protect local residents and the environment from exposure to the heavy doses of toxic pesticides that the biotech companies use on their fields year round. 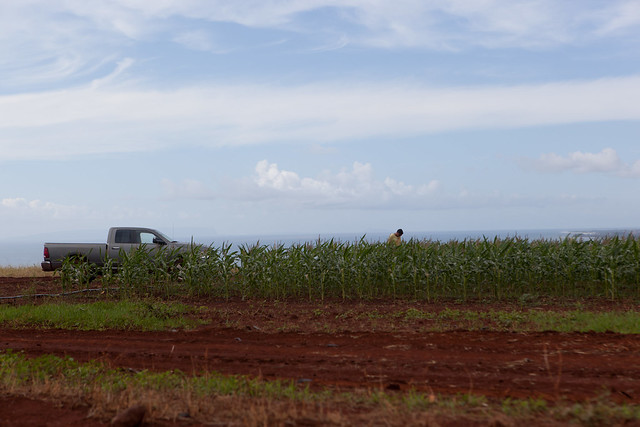 “Obviously I would have preferred a different ruling… I will recommend to my client that we appeal to a higher court,” Earthjustice attorney Paul Achitoff said in an interview Monday evening. The legal nonprofit has intervened in the case to defend the county’s law.

The Kaua‘i County law, Ordinance 960, was passed in November after surviving a veto by Kauai Mayor Barnard Carvalho. The law, which received widespread support within the community, requires agricultural companies and large farms to disclose the type and volume of pesticides they are spraying and the location of their genetically modified crop fields. It also requires the companies to set up buffer zones between fields growing GM crops and public places like schools, hospitals, and parks.

The four global pesticide and genetically engineered seed corporations that have large operations on the island — Pioneer-DuPont, Syngenta, and Agrigenetics Inc (a subsidiary of Dow Chemical), and BASF Plant Science — had challenged the new law in federal court, arguing that it arbitrarily targets GE seed farming operations on Kaua‘i and tries to regulate activities over which counties have no jurisdiction.

Ruling on the lawsuit yesterday, US Magistrate Judge Barry Kurren concluded that the pre-existing Hawai‘i Pesticide Law preempted the Kauai ordinance and that only state government had the authority to regulate the seeds companies.

“This decision in no way diminishes the health and environmental concerns of the people of Kaua‘i,” Judge Kureen wrote in his decision. “The Court’s ruling simply recognizes that the State of Hawaii has established a comprehensive framework for addressing the application of restricted use pesticides and the planting of GMO crops, which presently precludes local regulation by the County.”

The biotech companies issued a joint statement yesterday saying they were pleased with judge’s decision.

Kaua‘i Mayor Bernard Carvalho, who had vetoed the bill in November, told reporters that though he agreed with the intent of Ordinance 960, he had always held that the county law was not the proper and legal way to proceed.

Meanwhile, Earthjustice attorney Achitoff pointed out that the court had also ruled that the Ordinance 960 was not preempted by federal law. This, he said, leaves the avenue open for the state of Hawaii to enact a new law in the future that would better protect its citizens from pesticide exposure. (Attorneys for Earthjustice, and the Center for Food Safety also represented three other organizations that supported the law — Pesticide Action Network, the Surfrider Foundation, and a group of local residents called Ka Makani Ho‘opono, or “The Wind That Makes Right,” who have been directly affected by pesticide drift)

More immediately, however, the Kaua‘i County Council has to decide whether it will appeal the ruling. The council is scheduled to meet in two weeks.

For many Kaua‘i residents and community activists, the federal ruling, though disappointing, only means that the battle is far from over.

Recent reports that pesticide use by the chemical companies on Kaua‘i is some of the highest in the nation, and has transformed parts of Kaua‘i into “one of the most toxic chemical environments in all of American agriculture,” (Read: “The Kaua‘i Cocktail”) has further reinforced the critical need for disclosure laws and buffer zones, the Hawaiʻi Alliance for Progressive Action said in a press release yesterday.

“The failures of the State to protect health and environment were made abundantly clear in deliberations over Kauai’s Bill 2491 (partly summarized in this article) and residents are infuriated by the blatancy of injustice. Since the passage of Ordinance 960 last November, several groundbreaking studies by respected scientists and health institutions have revealed the links between disease and pesticides applied on Kaua‘i,” the release said.

“If anything [the court decision] just increases the resolve of the community and myself personally to hold the chemical companies accountable,” councilmember Gary Hooser, who coauthored Ordinance 960, said over the phone from Kaua‘i yesterday. “For the court to say that it’s the state’s responsibility and not ours is hard to fathom when the state has been negligent. … The community is going to keep pushing this. One federal magistrate’s decision doesn’t end the conversation, that’s for sure.”