Fences. Everywhere I went during a recent trip to Point Reyes National Seashore, I encountered fences. There are 300 miles of these barriers throughout the 71,000-acre national seashore. Why are there fences in a national park unit? The National Park Service (NPS) would say they are part of a “cultural heritage” that needs to be protected. But these fences are symbolic of a controversy at Point Reyes. They exist to facilitate the private use of public lands, for the personal profit of the cattle industry, with the full blessing of the park service charged to preserve the area’s natural values. 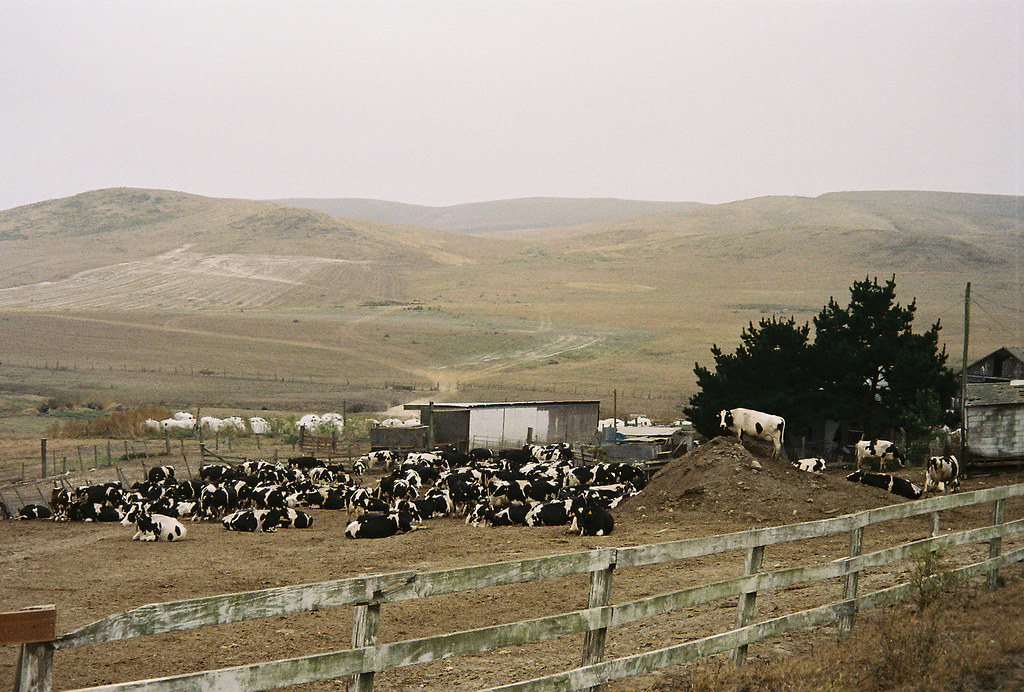 It is evident when you travel to the park where the NPS stands with regards to ranching. Interpretative signs tell you that ranching is “historical,” and we are told how much milk or meat is produced to “feed the nation” and other “facts” designed to put ag land use in a positive light.

But livestock grazing in the park significantly degrades the natural values of Point Reyes. It damages streams, pollutes waterways and lagoons, and harms native flora and fauna, including the native tule elk, a rare subspecies of elk found only in California that has been cast aside in its native habitat to make way for domestic cows. The controversy surrounding private ranching in a national park illustrates the problems created when personal profit and “cultural” preservation trumps the other values national parks are supposed to preserve.

On April 22, Earth Day, the California Coastal Commission (CCC) voted 5-4 to issue a tentative approval to an NPS plan to extend livestock grazing leases in the park for another 20 years under the guise of preserving the area’s “cultural heritage.” This new management plan by the NPS also calls for an expansion of agricultural crop growing on native grasslands, killing tule elk, installing more fencing on our public lands to separate elk from domestic cattle, and expanding the number of livestock permitted to graze the park.

Point Reyes is one of the few places where native tule elk are found in California. In 2020, approximately 300 elk are fenced in at Tomales Point, with another 300 or so concentrated in the Drakes Beach and Limantour-Muddy Hollow-Glenbrook areas.

But there are more than 5,700 cows in Point Reyes. Isn’t there something wrong with this picture when domestic animals outnumber a native wildlife species nearly 10 to 1 in a national park?

Controversy over livestock grazing in Point Reyes has existed since the park’s inception. In 1951, NPS Director Conrad Wirth led a survey of the peninsula to assess its potential as a national park unit. At that time, the entire Point Reyes peninsula was private farmland. But Wirth’s survey also found a wealth of biodiversity, leading him to recommend the area to be protected as a national seashore.

As might be expected, the ranchers and Marin County Supervisors opposed the creation of the national seashore. Nevertheless, ranchers were paid a substantial amount of money for their properties, often millions of dollars per ranch acquisition.

In a generous concession, the occupants of these buildings and ranchers were not required to leave the parkland immediately. Starting in 1962, ranchers were given a reprieve of 25 years or upon the death of the primary owners (whichever came first) that allowed them to continue grazing and residing in the public’s property. The intention was to sunset ag production at the end of that period, but near the end of their leases, the entrenched ranchers successfully lobbied to remain on the seashore. Since then, the 25-year grace period has been extended twice.

Ironically, most of the support for continued livestock grazing in the park comes from liberal Marin County residents who seem to believe there is no place else in California to produce dairy products or beef except in a national park. But when you drive to Point Reyes, you pass dairy and cattle farms almost continuously. There is no shortage of cattle in California, or even in Marin County beyond the park boundaries. California has the fourth highest amount of cattle in the country, with more than 5 million cows. Why should we allow private individuals to graze domestic livestock, a commodity abundant on private lands throughout the state and nation, in a national park unit?

About one-third of the 71,000-acre national seashore is designated a “pastoral zone,” where 24 ranch operations graze cattle on 28,000 acres of parkland, as well as 10,000 acres in the adjacent Golden Gate National Recreation Area.

Also, the buildings, homes, and other structures used by the ranchers — but owned by the public — are within the national seashore. We, the taxpayers, pay for the maintenance of fences and roads on these properties. The NPS (i.e., taxpayers) receives about $500,000 in revenues from the ranch leases — less than half of what it spends to maintain them. When you consider how much housing in Marin County costs, the 24 ranch operators are getting a substantial public subsidy.

This lease arrangement issue with ranchers came to a head when drought conditions from 2012 to 2014 caused the death of half of the elk population that was trapped behind a fence constructed to keep elk confined to a small, waterless, 2,000-acre parcel of the seashore. Another 150 elk died last year, and environmental activists fear dry conditions in 2021 could once again put the fenced-in herd at risk. The native tule elk are sequestered on 2,000 acres, while domestic livestock is given free rein on 38,000 total acres. 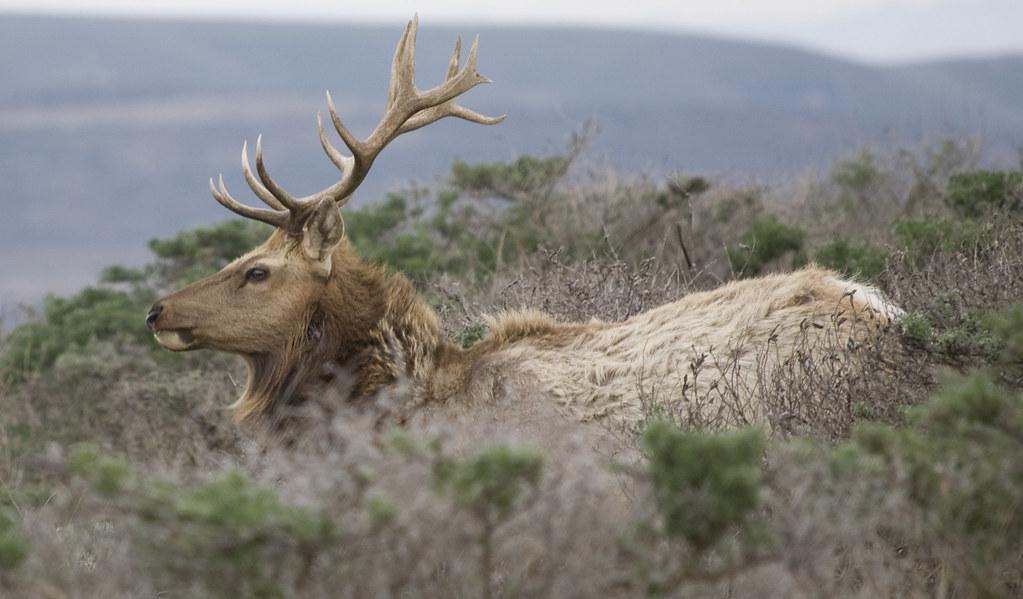 Point Reyes is one of the few places where native tule elk are found in California. Photo by Paulo Philippidis.

But the elk aren’t the only ones impacted by the cattle industry’s presence. The collateral damage from livestock operations also includes pollution of the park’s waterways. Indeed, one stream in the park has some of the highest coliform bacteria counts found along the entire California coast. For instance, a recent survey found E. coli bacteria concentrations up to 40 times higher than state health standards. Enterococci bacteria were up to 300 times the state health standard at Kehoe Lagoon.

A 2013 Coastal Watershed Assessment asserted that the principal threats to water quality on Point Reyes were bacterial and nutrient pollution from ranches and dairies. In particular, the Drakes Bay, Limantour, Kehoe, and Abbotts Lagoon areas were significantly polluted — remember, these are state-protected marine zones.

The ranch operations also help spread exotic plants, while the livestock consumes forage that would otherwise support native herbivores like the tule elk. Another NPS study confirms that the livestock operations at Point Reyes are responsible for the vast preponderance “of greenhouse gas emissions” at the park.

Now, the NPS wants to give ranchers another 20 years of grazing, while allowing them to expand operations to include chickens, pigs, goats, and sheep. Ranchers will also be permitted to operate bed-and-breakfasts and farm stands — using our property. And finally, in another concession to private business interests, the NPS plans to shoot tule elk annually to maintain a population that will not compete with livestock operations or antagonize ranchers.

The California Coastal Commission vote did put some sidebars on the plan’s approval, however. For instance, the NPS must come up with a plan to reduce (but not eliminate) water pollution in the park in one year. A final approval of the NPS plans to extend grazing privileges is halted until the CCC approves the water quality proposal. The NPS must also produce a climate action plan, and the CCC is allowing only a five-year period to implement and improve water quality rather than the ten-year proposal made by the NPS.

Point Reyes Superintendent Craig Kenkel initially objected to the amendments but finally agreed to produce the materials in the timeline required.

This plan is in direct violation of the law creating the national seashore. The legislation requires that Point Reyes National Seashore “shall be administered by the Secretary without impairment of its natural values, in a manner which provides for such recreational, educational, historic preservation, interpretation, and scientific research opportunities as are consistent with, based upon, and supportive of the maximum protection, restoration, and preservation of the natural environment within the area.” Permitting continued livestock operations in the park unit is not consistent with the stated legislative goals.

The word “shall” is essential. “Shall” does not give the NPS discretion to favor the ranchers’ interests over protecting the natural environment.

As I explored Point Reyes and encountered fences all over the national seashore, I kept thinking about Ronald Reagan’s admonishment about the Berlin Wall, telling Mr. Gorbachev to “tear down this wall.” In Point Reyes, where native tule elk should have the right to roam freely, I feel compelled to shout to the Point Reyes superintendent, “Mr. Kenkel, tear down those fences.” Something is wrong when native animals like elk are given second priority to maintain private operations in a national park.