The industry has long come under fire for tossing unsold clothing. Is it finally evolving?
Cameya Martin

If you spend any amount of time on TikTok or Instagram, you might come across a subset of videos using the tag #dumpsterdiving. Many of these clips, in which young adults are often seen opening grungy dumpsters and revealing piles of brand-new products, have gone viral. They feature massive hauls of makeup, clothing, and shoes from large brand name stores, worth hundreds — sometimes thousands — of dollars. These items are typically brand new, with tags still attached, or in excellent condition.

A wide range of clothing brands have been caught throwing out unsold clothing over the years. Often this clothing is destroyed before it is tossed so that it cannot be salvaged by dumpster divers. Photo by thinkretail / Flickr.

Viewers often express shock about the waste in the comments. One comment on TikTok from user Sarah Corley stated, “I just don’t understand why businesses throw good stuff away they could donate it so sad the waste I’m glad you get this stuff and donate it.” And many more users openly wonder about how companies have allowed these policies to go on, where unused product is tossed out for seemingly no reason. But the issue is not a new one.

In fact, many brands like H&M, Old Navy, Bed Bath & Beyond, Eddie Baur, and Coach have been called out for this behavior for years. In 2010, H&M came under fire for throwing out pounds and pounds of new merchandise and even destroying it so that it could not be salvaged by dumpster divers. The New York Times broke the story, and it soon became the second most tweeted topic on Twitter.

In 2020, Victoria’s Secret was called out for throwing out hundreds of dollars worth of bras and underwear. At the time, a representative for the company said they were show room items that were tossed out after the store’s closure. This waste is a symptom of the fast fashion industry.

Fast fashion refers to the constant release of low-quality clothing products at cheap prices. Clothes are not produced for repeated seasonal wear, but rather based on rapidly shifting trends in the fashion world, meant to be worn only so long as they are in style. Items are priced so low that it’s hard for consumers to say no and easy for them to constantly cycle hardly worn pieces out of their closet for new, interesting styles.

The fast-fashion industry has continued to grow since the early scandals in the 2010s. But has the industry changed practices at all?

According to H&M, when it comes to dumping at least, they have. In 2020, H&M published a sustainability performance report, which included reports from all brands under H&M Group, including Weekday, H&M Home, Arket, and more. The report stated that the H&M Group would work on reducing operational waste, production waste, and faulty products. It boasts that “92 percent of waste handled in H&M Group distribution centres was recycled or reused” in 2019 and addressed the concern about destruction of garments stating, “we never send clothes to landfill and only destroy them in very few cases, where there are no other options.” The items that they do destroy are typically incinerated. In the same report, H&M makes a goal to use 30 percent recycled materials by 2025.

In a recent statement to Earth Island Journal, an H&M representative reinforced this message: “We would like to emphasize that under no circumstances would unsold clothes that are safe to use be destroyed … We have a strict policy prohibiting destruction of any products that could be sold, used, or recycled.”

The company seems to have changed other practices as well. In January of this year, Fast Company reported that H&M had committed to a new environmental protocol which involves recycling unsold clothing, offering vouchers for consumers to return worn clothing, and offering sustainably produced clothing. It appears that H&M is using its brand power to attempt to address fashion’s pollution problem — or at least trying to make things look that way.

Other brands, too, seem to be rethinking their model. Following the Covid-19 pandemic, designer Alessandro Michele, the creative director of Gucci, stated that the brand would focus on only two seasons per year to limit waste. So far, Gucci is the only major high-end retailer to make seasonless clothes permanent, but it could be a step in the right direction.

But that doesn’t mean the practice of dumping and destroying unsold items has ended. A 2021 report by a British news outlet found that a single Amazon warehouse in Scotland was discarding millions of items a year. And if the TikTok videos are to be believed, outlet stores, malls, and pet stores around the world are still throwing out products and even destroying them. One 2021 video shows boxes and boxes of brand new shoes that have been cut or slashed to prevent people from reusing them. Slashing shoes is something a Nike store was caught doing years.

One reason that these retailers destroy perfectly good products is because it costs money to have them shipped to garment recycling centers, where clothing can be transformed into reusable fiber. Another is the push to create an artificial scarcity mentality in their buyers so that their “buy it before it’s gone” business model continues to work, and so that people don’t come to expect they can find unused product for free.

The environmental toll of this waste extends far beyond the landfill. By some estimates, the fashion industry is responsible for 10 percent of global greenhouse gas emissions. Producing textiles also requires massive amounts of water and causes significant water pollution. One of the primary microplastics polluting our oceans is synthetic textiles from washing laundry. When fast fashion brands use cheap fabrics that are made up of fibers such as acrylic and polyester, those microplastics end up right back in the ocean, even if the clothes are reused and recycled. 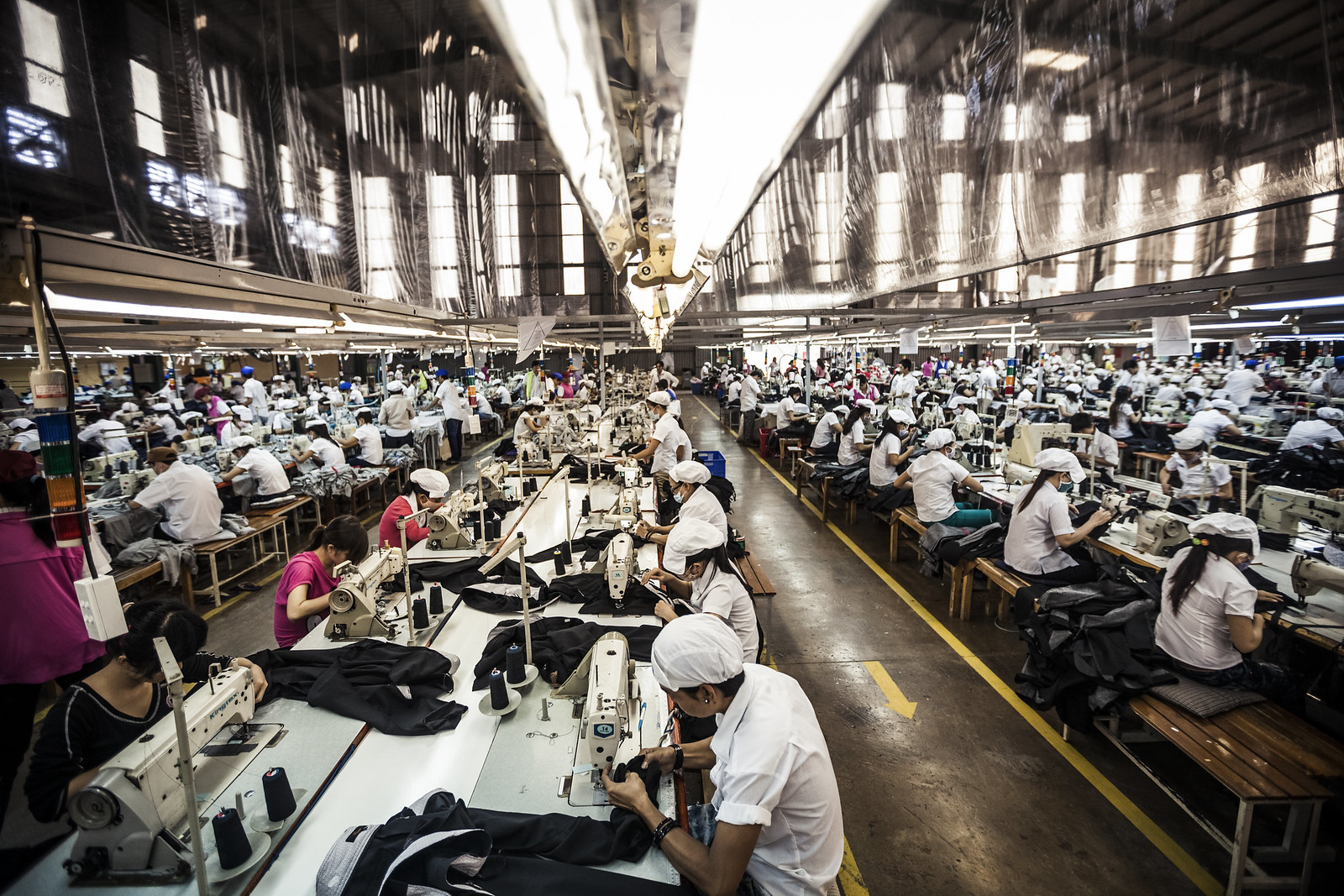 Online
Fast Fashion May be Cheap, but it Comes at a Cost

The garment industry is taking a steep toll on people and the planet in order to keep prices low.

There are ways that brands could reduce these impacts. They could focus on more sustainable fabrics, which don’t have microplastics, such as wool and cotton. Wool in particular is a sustainable fabric that will break down in the environment naturally. However, it isn’t a perfect option. Sheep require large amounts of water and like their bovine counterparts, they emit carbon emissions. Many brands in the US are experimenting with 100 percent organic cotton, but dyes and chemical treatments in the production of the products can still have impacts on the environment.

The fast fashion giant, Zara, for one has started including more sustainable fabrics in its lines, and also moved to recyclable packing. However, they still include synthetics, dyes, and microplastics in their clothing. Their brand is built on the principle of releasing new fashions every 13 days. Other brands, like Topshop and Forever21, release as many new fashions as Zara or more, with Topshop cycling out hundreds of new items each month. Cleary, there is still work to be done.

Unfortunately, the fast fashion industry has made one thing abundantly clear: it will not stop excessive fashion waste unless it is no longer profitable to do so. Which means change may have to come from legislature.

The European Union is leading the way in fast fashion reform, with a recent proposal aimed at putting the responsibility of ending fast fashion on the manufacturers themselves. Under the proposed rules, manufacturers that want to sell their items in the EU would be required to design higher quality products and provide information about how recyclable items are. The rules would also ban the destruction of unsold items. Whether the policies would be imposed through self-reporting or by watch-dog monitoring remains to be seen. The proposal has yet to pass.

What legislation looks like and how it is implemented across the world will come down to the citizens. It has never been more important to encourage representatives to take consumer opinions into consideration.

“We’ve waited for voluntary action from brands for too long. Citizens have the power to demand greater accountability from the fashion industry by supporting tougher legislation,” says Ruth MacGilp, communications manager with Fashion Revolution, a nonprofit dedicated to ending human and environmental exploitation in the fashion industry. Currently, Fashion Revolution is targeting labor issues in the industry with its Good Clothes Fair Pay campaign. “We need 1 million signatures from EU citizens to call on the EU to introduce a policy that requires due diligence on living wages across the fashion supply chain,” MacGilp adds.

The US hasn’t come quite as far when it comes to tackling the fast fashion industry. Which means consumers must continue to push for aggressive changes, both with their wallets and their votes.

Cameya Martin is a freelance writer who focuses on the environment, business, and photography.