Ramesh Agrawal knew right from the start that he was putting his life on the line. When you take a stand against India’s politically powerful coal industry, that’s almost a given.

“I knew from their past history what they are doing to their agitators. So I knew anytime, anything can happen to me,” says the soft-spoken environmental activist who has spent the past decade helping villagers demand their right to information about the rush of industrial development projects in the mineral-rich Indian state of Chhattisgarh. 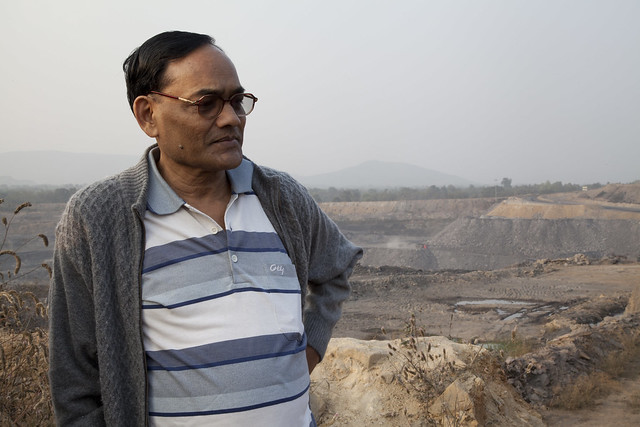 Photos courtesy The Goldman Prize Ramesh Agrawal at the site of a coal mine in a village near Raigarh, India.

The worst nearly did happen to him. Agrawal came close to paying the ultimate price for speaking out against mining interests in a state where nearly one-fifth of India’s coal reserves lie buried and where the rush to extract the minerals is destroying the environment and displacing the impoverished, mostly Indigenous, villagers who depend on the state’s equally rich forest cover for survival.

Now, his persistence and courage has earned him international recognition. Yesterday in San Francisco Argawal was honored as one of the winners of the 2014 Goldman Environmental Prize.

Although Agrawal doesn’t have any legal training, he has, in collaboration with other grassroots groups, managed to win three lawsuits against major power and mining companies in the state. Plus he runs a pretty strong grassroots campaign to educate illiterate and semi-literate tribal villagers about their special legal rights (as Indigenous people) to the state’s land and forest resources so that they can fight land-grabbing by industry. “Earlier [the villagers] used to hesitate to go to even the most low-rung government offices. But I’ve been convincing them that they have a right know and its [the officials’] duty to help them,” he says.

Over the years, Agrawal has become a formidable obstacle to the industry’s standard way of doing business — which usually involves backroom deals with politicians and little regard for the common man or environment. The backlash, in some ways, was inevitable.

On July 8, 2012, while he was sitting in his small Internet café in the city of Raigarh — which also doubles as the office of his grassroots group, Jan Chetna (People’s Awareness) — two men walked in and shot at him. Agrawal was saved by his cellphone, which he instinctively flung at the attackers in defense. It deflected the gunman’s aim. The bullets missed his upper body and pierced his left thigh instead, shattering his femur.

The attack took place about a month after the Indian government’s National Green Tribunal revoked the environmental permit for what would have been Chhattisgarh’s largest coal mine, citing several violations that Agrawal and his colleagues had discovered by examining documents obtained using India’s new Right to Information law. The mine had been planned by Jindal Power Pvt Ltd, the biggest corporation in the region. The gunmen were later identified as security guards employed by the company.

Agrawal alleges that Jindal Power paid the men to kill him. “It’s their policy that if some person is going against you, first try to buy them, if that doesn’t work then you try to get rid of them,” he says.

The company initially tried to lure Agrawal with bribes, he says, but when he didn’t take the bait, it slapped a bribery case against him and got him locked up in jail for 72 days on flimsy defamation charges. When that also failed to stop Agrawal, the guns came out. (Jindal Power, of course, rejects this allegation. The case is yet still being investigated.)

Raigarh, is a hardscrabble town that is “completely owned by Jindal,” Shubranshu Choudhary, a former BBC journalist who runs a citizen-journalists’ news portal for Chhattisgarh, CGNet Swara, told me over the phone from India. “They are the kings, there’s no democracy there. To stand up against someone like them, that’s commendable… It’s not easy to do what he’s doing.”

Agrawal’s story underscores the deep unrest that is fomenting across India’s rural regions as the country’s growing economy scrambles to meet its rising energy demands. Much of this demand is being met by coal, the most abundant fossil fuel in the country. (India’s coal power industry grew by 79 percent from 2007 to 2012).

The bulk of India’s untapped mineral resources lie under a vast swath of land running through the middle of the country, starting from the northeast and stretching nearly all the way to its southern tip. This swath is also home to the country’s adivasis (Indigenous) population and has some of India’s densest forest cover. It’s the classic story of rich lands, poor people, and exploitative companies.

“These companies are looting [the villagers] and they are losing everything — their land, their environment, their natural resources, their forests,” Agrawal says. “They are the ones paying for this energy… They don’t have power in their villages. They have power plants and coal mines in their area but they are still dependent on [oil] lanterns.”

But as the coal industry attempts to muscle through mining and power projects, using its political and mafia ties to quell opposition, it’s being met with increasing local resistance, especially from the adivasis who are being displaced from their ancestral lands. The cost of this opposition has been high. There have been brutal murders, activists routinely face intimidation and many have died during protests. Agrawal has been extremely fortunate to have survived thus far, his supporters say.

Agrawal speaks with villagers near a coal mine site in Libra Village, Chhattisgarh, India

After two years of medical treatment, including a botched surgery that required another round of operations to correct, he now hobbles around with an external metal brace screwed into his upper thigh that juts out half-a-foot from his body. It’s going to be a long while before he recovers full mobility. But if anything, the attempt on his life has made Agrawal even more determined to keep up the fight.

“Nothing can stop me,” he told me when I met last Friday at the offices of the Goldman Foundation. He was conferred the award, along with five other grassroots environmentalists from across the world, at a grand ceremony last evening. When I spoke with his son, Raman, he told me that though his family worried for his father’s safety, winning the Goldman Prize had given them courage. “Now that the whole world knows him, [the coal industry] will be careful about how they treat him,” Raman said.

Despite Agrawal’s strong words, he isn’t really one of those rabble-rousing, slogan-shouting firebrand activists, say those who are familiar with him. A careful and methodical man, he always works within the bounds of law and often advises his more belligerent colleagues to do the same.

“Rameshji is a very soft spoken person who is calm and composed even in the wake of adversity,” says Sreedhar Ramamurthy, chairperson of the watchdog group Mines, Minerals and People, who has worked closely with Agrawal. Ramamurthy recalls that when he visited Agrawal in prison, he seemed to harbor no bitterness against those responsible for locking him up. Instead, always maintained a positive spirit and spent his time working on his multiple campaigns, filing reports, and helping other inmates with their cases. Though he often gets pulled into other civil and human rights issues, Agrawal’s main focus is, as he says, “saving the environment and saving the livelihood of forest-dwelling tribes.”

“I’m very clear about this — coal is the dirtiest fuel of the world. It creates more pollution and problems than any other fuel… . We should think of other alternative sources of energy,” he tells me. “We have to try to survive without coal… though it seems impossible right now, I’m very hopeful that it can happen. I will keep trying. I’m not worried or depressed about whether I will succeed or not. I’m just working, doing my duty.”