Tribal chief Marcos Verón grew up in flourishing rainforest in Brazil’s Mato Grosso do Sul region. His would be one of the last generations of Indigenous Guarani-Kaiowá peoples to practice their cultural, spiritual, and subsistence lifeways in the resource- and species- rich Amazonian forest that had shaped them. Their thousands-of-years-old culture abruptly collapsed in 1953, wiped out by a rich Brazilian who bulldozed their homelands and cast their people out to make way for a vast cattle ranch. 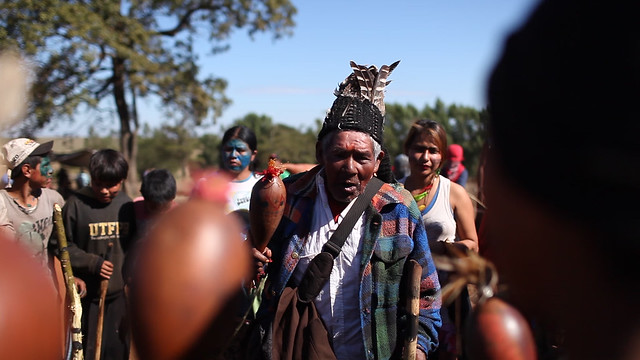 Photo courtesy of CIMI (Indigenous Missionary Council) The Guarani-Kaiowá gather in protest of an attack in Caarapó, Brazil in 2016.

The Guarani-Kaiowá now struggle to survive on the fringes of a society that scorns them. Their homes are plastic tarps that line the side of a highway. They are plagued with malnutrition. At least 53 of their children have starved to death in the last dozen years. Their suicide rate, 232 per 100,000 people, is the highest in the world, according to a 2014 study. Most victims are between 15 and 30 years old. One Guarani man told Survival International, “There’s no future, there’s no respect, there are no jobs, and there is no land where we can plant and live. They choose to die because actually, they are already dead inside.”

Verón gave his life trying to help his Guarani-Kaiowá peoples — he was allegedly beaten to death by employees of the rancher in 2003, though three men were acquitted of homicide in the case in 2011. His was one of the first deaths — it’s estimated that roughly 400 Guarani-Kaiowá have been murdered for peacefully protesting and trying to reclaim their ancestral land.

It’s a situation that’s worsened with the election of Brazilian President Michel Temer, Victoria Tauli Corpuz, the UN Special Rapporteur on the Rights of Indigenous Peoples said. Last year, she issued a statement censuring the Brazilian government for its treatment of the Guarani-Kaiowá, and Indigenous Peoples throughout Brazil.

More recently, the European Parliament (EP) has also taken an active role in standing up for rights of Indigenous Peoples. Earlier this month they launched the ‘EP Friendship Group for Indigenous Peoples of Latin America.’ Their action follows a fact-finding mission to Brazil last year organized by the Unrepresented Nations and Peoples Organization (UNPO) for Members of the European Parliament (MEPs), political groups, and high-level officials.

The mission was confronted with heart-breaking stories of murders and disappearances of Indigenous leaders, and the extreme poverty in which their communities live. After hearing the grievances of the Indigenous communities visited, MEP Francisco Assis expressed deeply felt sympathy and solidarity on behalf of their delegation, and referenced Europe’s historical responsibility in the suffering of Indigenous peoples worldwide.

The findings led to an unprecedented level of support by the European Parliament for Indigenous Peoples in Brazil and Latin America, Lukas van Diermen, UNPO Project Officer said. Within days of the mission’s report, twenty-four members of the European Parliament from six different political groups called upon the European External Action Service to condemn and conduct investigations into the violence, including police violence against the Guarani and other Indigenous land rights campaigners in Brazil. The EP also issued a resolution that urges Brazil to take immediate action to demark Guarani territory and protect their security. The resolution additionally calls on the government to honor its responsibility to maintain and apply the rights of Indigenous Peoples and other minorities as provided in the Brazilian constitution.

Van Dierman said the Friendship Group will “consolidate and amplify support for the Indigenous cause at the European Parliament through the organization of events, fact-finding missions, and written and oral parliamentary questions.”

Tauli-Corpuz and van Diermen both say the loss of ancestral land is a key facet in the threat against Indigenous Peoples in Latin America. Indigenous community members in Brazil — as well as in Paraguay, Honduras, and Mexico — blame mining industries, mega-infrastructure projects, agri-business, and drug cartels for encroaching upon their land, Tauli-Corpuz says. And violence again the Guarani, as well as other Indigenous groups, is often linked to territorial disputes.

“It’s the main fight in many cases,” van Diermen said. “Some related threats are discrimination and stereotyping, hate speech against [Indigenous Peoples], the violence perpetrated against [Indigenous Peoples] when they attempt to take their lands back or protest for their rights, and the impunity with which this violence takes place.” When Temer came to power last year his government decreased the budget for FUNAI (Brazilian Indian Foundation) by more than 40 percent.

FUNAI is the only governmental body mandated to address the issues and rights of Indigenous Peoples. The agency demarcates the boundaries of ancestral lands inhabited by Indigenous communities and helps protect their lands from invasions by outsiders. But, Tauli-Corpuz said, a Brazilian Congressional Investigative Commission’s report has recommended that FUNAI be stripped of its responsibility for legal titling and demarcation of indigenous lands. The debilitating assault on FUNAI’s agency came from a congressional commission dominated by lawmakers from an agribusiness caucus, The Guardian reported.

“I received reports [that] FUNAI offices in several [Brazilian] states have closed down,” Tauli-Corpuz said. “In July 2017, the Attorney General’s Office of Brazil released a legal opinion which directed the federal government agencies to freeze all Indigenous land demarcation cases if these were not occupied before October 1988 when the Federal Constitution was enacted.

“If this is enforced more than 700 pending cases of indigenous land demarcation will be stopped. This act will violate the constitutional rights of Indigenous Peoples to their ancestral lands.”

“The EP is in the position to pressure the EU’s governing institutions to put Indigenous rights high on the list of priorities when engaging in any sort of negotiation or dialogue,” van Diermen added, speaking to the significance of the new group. “The EP can make sure this is not a topic that can be avoided or left untreated. The ongoing negotiations between the European Union and the Mercosur trading bloc, carried out from the latter side by Brazil’s ambassador to the EU, offer an important occasion in which this kind of pressure can make a real difference in setting the terms under which the EU and Brazil further develop their diplomatic and economic ties.”