Why do your warships
Sail on my waters?
Why do your bombs drop
Down from my sky?

Ten years ago, in the small coastal fishing and farming village of Gangjeong on Jeju Island, South Korea, the Korean government made a deal to construct a joint United States-South Korea naval base. The base would be located at the site of a beautiful volcanic rock plateau called Gureombi. For centuries the villagers in Gangjeong revered this rock formation, protecting it, laying in its warm streams and pools, sharing food, and holding ceremonies there.

Photo courtesy of Joyakgol Local activists protest the construction of a joing US-South Korea naval base on Jeju Island.

Five years ago, against the protests of hundreds — in the village and internationally — police stood guard as contracted workers dynamited this sacred site, beginning construction of the base. From the other side of the razor wires, the villagers watched in despair as a crucial cultural landmark was (almost entirely) blown to bits. Then came the endless procession of cement trucks, dumping load after load of concrete over the mangled remains of Gureombi, smothering memories as well as the habitats of endangered species of crab and frog, destroying the breeding ground for thousands of shellfish and seaweeds, and decimating what was once an important foraging ground for villagers. (Read more about the impacts of the base here.)

Over the course of the resistance, hundreds of people — from international activists to mainland Koreans standing in solidarity with the villagers, to the villagers themselves, including the former mayor and numerous Gangjeong elders — have been arrested for impeding the base’s completion. At times more than one thousand police — many from the mainland — have been sent in to Gangjeong to ensure the construction of the base continued, views of the locals be dammed.

Last year the naval base opened. And in March of 2017, the first US Navy vessel docked at Jeju, followed by a second one just last week.

Why has all this happened? Why have sacred sites and vital habitat been destroyed?

Gureombi, and the villagers themselves, had the misfortune of being in the way of progress.

In this case, progress meant a massive new naval base complete with warships. It also seemed to mean lying to village elders and then laying the groundwork for an occupation of the land. Big money was on the line.

Now the base in Gangjeong is finished. And as the villagers are being fined for delaying construction of a massive war project that has destroyed their beloved Gureombi and hometown, massive warships are already docking in the new base.

Photo courtesy of Joyakgol Advocates came together earlier this year for a remembrance celebration marking ten years of struggle against the naval base.

So much for “The Island of Peace,” Jeju’s official moniker given by mainland government just a decade ago to honor the tens of thousands of villagers slain by South Korean right-wing forces (with US aid) in the name of battling communism during the early years of US Military/South Korean government.

So much for the UNESCO World Heritage site adjacent to the base, and the coral, and the most northerly pod of Indo-Pacific bottle-nosed dolphins, and the endangered crabs that dwelled on or around Gureombi.

So much for the early promises made by government and big business that the base would serve a dual role as a port for not only warships but also huge luxury cruise ships full of excited tourists ready to throw money at the villagers.

So much for the promises of making the villagers rich. Instead they are being charged with a staggering bill — in the form of fines — for delaying the construction of a destructive project they never asked for.

So much for resistance and village unity. Sadly and naturally, many folks in Gangjeong have not only stopped protesting the base, but have now begun looking for ways to cater their businesses to the new clientele.

So much for no fences, no homeless, and no thieves — one of the old slogans of Gangjeong village.

And so much for Gureombi. Now the only remnant of this sacred rock not blown to bits and covered in concrete is a small section closed off within the base.

Perhaps in the coming years a few village elders will be able to find employment within the base walls by donning traditional hanbok and leading culture tours for the base workers’ friends and family members, telling the young children stories about the magical powers locals used to attribute to this beautiful rock. Then the parents can buy postcards and keychains of Gureombi, and visiting friends can write touching travel blog entries about the history of “shamanism” in old Korea.

So much for preserving a true and life-giving narrative of Gureombi and her real friends.

So much for freedom and autonomy.

And so much for real progress.

Now that the base is completed, this peaceful fishing village, once known for its community life and a healthy inter-generational relationship between a land and its people, will likely become a symbol of American hubris and the awe-inspiring power of the modern war machine.

Gangjeong is just one among many chess pieces in the US “Asia Pivot Plan,” which in the early 2010s shifted American military focus to the Asia-Pacific region. And with the first installment of the aggressively resisted Terminal High Altitude Area Defense, or “THADD,” missile defense system to the Korean Penninsula in late April, and the US talking openly of possibly executing a “first strike” on North Korea, Gangjeong is poised to become a major, high-stakes location on the Korean peninsula.

But why do I care? And why do I think you should care about Gangjeong?

I grew up in a small farming and logging community in the US Pacific Northwest, roughly the same size as Gangjeong. Each of the many times I’ve visited my friends in Jeju over the past five years, I’ve watched “progress” at work: I saw elders arrested, Gureombi reduced to rubble, the base shadows lengthen, and my friends’ faces darken with sadness and rage. Upon witnessing each new development in Gangjeong, I’ve always thought the same thing: If this was happening in my hometown, what would we all do? And always I’ve heard the same answer in my head: We’d fight like hell to save our home and kick out the destroyers. It wouldn’t matter what label they donned or where they came from. We’d know they were invaders. 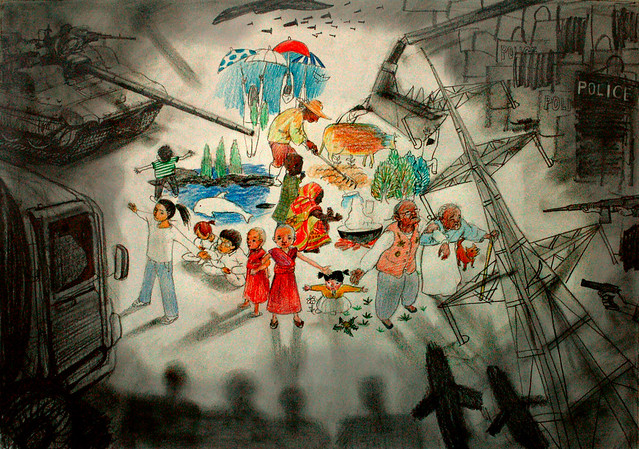 Artwork by Nan Young Lee A sketch depicting local resistance to the base and all that is at stake on Jeju Island.

Sure, initially some locals might accept the money and promises and even start to believe that development would make our poor town great, and us rich. But most of us would be irate. We’d see their lies as an unforgivable insult to our families and the land that we love and call home. And when the fish in the Cowlitz River started dying, and the dozers began rolling through sleepy little Toledo, and outside contractors brought in teams to lay concrete over our city’s beautiful, rolling fields, there’d be revolt. People would demand to know why the rule of law didn’t seem to matter when it came to this kind of progress, when it came to big money.

The thing about bullshit is, no matter what you call it or wrap it up in, it’s still bullshit. And sooner or later everybody can smell it. It wouldn’t take long before my townfolk started getting vocal in defense of our home just like my friends in Gangjeong have been doing for years. Except I’m not at all sure my kin could stay so bravely dedicated to nonviolence. Too many guns and too many hotheads.

What if we couldn’t stop the invaders? What if every time we held a meeting, or tried to block construction with organized dances, stand-ins, and morning prayer times, after it became clear our state government officials weren’t going to stand up for us, and busloads of young police recruits swarmed in to monitor construction progress and detain or jail any local who got in the way — what if the base walls just continued to rise? Would our community hold together?

It’s hard to say what would have happened in my small town — I suppose these injustices unfold differently in every situation. But I do know that the Gangjeong villagers continue to fight to maintain their way of life. They do what they can to survive in what’s left of their home. They are protecting all that can still be saved. And they are defending their memories. No matter what the “bad guys” do, no matter how much they take, no matter how many lies they sell, they cannot take your story. And as long as the real story is alive, they haven’t won.

In the shadows of the glimmering new super base, a few small buildings stand in Gangjeong. In those buildings, villagers and activists wait with open arms, loads of documents, books, videos, art, and other items that — alongside the living, breathing bodies of the survivors — offer the real story of Gangjeong, the destruction of Gureombi, and the decade-long struggle of hundreds of brave villagers and their activist allies against an army of concrete, and the giant, lecherous monster of Empire hiding behind a mask of progress.

In these spaces, and in the blood and bones of the villagers and everyone who congregates there to listen to them, the fight is alive, Gureombi and Gangjeong live on, and so does the struggle to protect and preserve their living memories. They offer their stories to anyone with ears to hear, and their assistance to all who are currently fighting the same Goliath and his minions of progress in their own homelands.

As bishop Kang U-il declared in 2015 as the base neared completion: “There are people who say that there is no more need of struggle since the Gangjeong base has been almost completed. No, the real struggle starts from now on.”

In these times, we must remember together in order to resist and protect together. We must remember that Gureombi is alive, and that the battle for Gangjeong isn’t over. That it’s a fight for survival — for all of us.