Scott Krogstad grows soybeans and sugar beets in the heart of the Red River Valley near Grand Forks, North Dakota. Like most sugar beet farmers in the Midwest, he wages a difficult war with the unpredictable infestations of the sugar beet root maggot. The maggot, the larva of a small two-winged fly, can completely sever the roots from a beet with its hooked mouth. 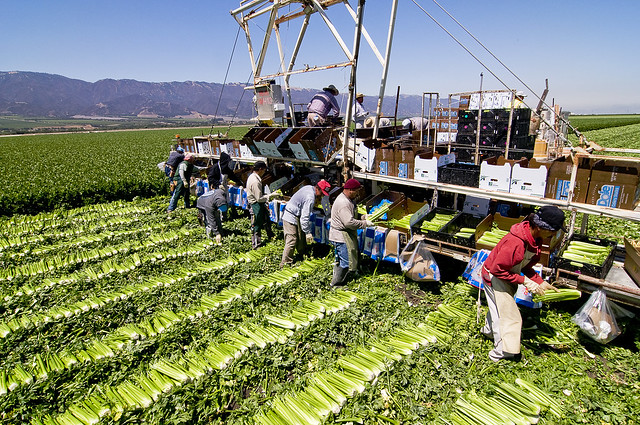 Photo by Dan Long Farm workers cut and pack celery in Salinas Valley, California. Many farmers view the insecticide chlorpyrifos as indespensable in their battles with bugs.

Meanwhile, a thousand miles away in fruit orchards near Provo, Utah, farmer Alan Riley fights off the San Jose scale, an aphid-like insect that sucks sap from his apple, peach, and cherry trees. It can turn apples from red to purple around feeding sites and result in small, deformed fruit.

Despite their many miles of separation, Krogstad and Riley have one key thing in common with each other and countless farmers across the country. They view the insecticide chlorpyrifos as indispensable in their respective battles with bugs. So naturally, they, and many other farmers are dismayed with the US Environmental Protection Agency’s recent proposal to ban chlorpyrifos because of the pesticide’s impact on the health of children and farmworkers who come in contact with it.

Chlorpyrifos is part of a class of chemicals, known as organophosphates, that was developed before World War II as a nerve gas that could halt neurotransmissions in a soldier’s brain. Chlorpyrifos kills bugs by disrupting their brain functions in a similar way.

The ban on the chemical was triggered by a lawsuit filed by NRDC and several other environmental and farmworker organizations.

Introduced by Dow Chemical in 1965 as an alternative to DDT, chlorpyrifos usage took off in the years following the EPA’s decision to ban DDT in 1972. It is now the nation’s most heavily used insecticide, and farmers fear a decrease in their incomes and the food supply would occur if the EPA forces them to abandon chlorpyrifos.

The most recent government statistics show that American farmers used about 6 million pounds of chlorpyrifos in 2012, according to the USGS. USGS data also show that farmers used about three times as much chlorpyrifos as any other organophosphate pesticide in 2009. California’s Department of Pesticide Regulation reports that 1.46 million lbs. were used in that state alone in 2013.

In agency speak, the EPA’s proposal would technically “revoke all tolerances” for chlorpyrifos, which means that any use that leaves a residue of chlorpyrifos on food would not be allowed. A public comment period on the proposal expired in early January. If approved, the ban would go into effect in December 2016.

In comments submitted to the EPA, Riley said, “Without chlorpyrifos and the early control that it gives us, I’m afraid it will be necessary during the season to use more chemicals such as pyrethroids to get the same control.”

Krogstad told Earth Island Journal that he does not use chlorpyrifos every year, and tries to minimize its use. But in his comments to the EPA he said that “removing chlorpyrifos from the market will not reduce society’s exposure to pesticides, it will increase it in my area.” He said that without chlorpyrifos, he would have to increase the use of other insecticides on his farm at a higher cost.

However, not all farmers are as worried about the ban. Indeed some see it as a welcome move given that the chemical is being identified in several studies as causing, even at very low doses, numerous health problems involving the brain.

Jean Edwards, a blueberry grower in Hillsboro, Oregon for instance, cited “several less toxic chemical options” that are available. “Although we struggle with spotted wing drosophila in our fields, and must use pesticides frequently, we prefer to limit EPA approved insecticides to less toxic options than chlorpyrifos for blueberries,” he told EIJ.

In a health assessment released in December 2014, the EPA cited three “strong” studies that showed that prenatal exposure to chlorpyrifos “likely played a role” in adverse neurodevelopmental outcomes in children up to seven years old.

If anything, the EPA found that these studies underestimated the risk to children. In aggregate, the EPA said the research shows that chlorpyrifos exposure contributes to:

Attention problems and pervasive developmental disorders in early childhood; and

The most recent of these studies, the University of California-Berkeley’s CHAMACOS study of farmworker children in the state’s Salinas Valley, found “a statistically significant 7 point” reduction in IQ among exposed children. The children were exposed through their diet, inhalation, skin, and “tracking in” of pesticide residues through shoes and clothing, augmented by poor hygiene practices. The other studies were conducted by New York’s Mount Sinai School of Medicine and Columbia University.

Other parts of young bodies may also be at risk from chlorpyrifos exposure. In December, another CHAMACOS study of farmworker children in the Salinas Valley found that chronic exposure to pesticides can damage a child’s lung function by about as much as secondhand cigarette smoke does.

The news that the EPA would find that low-level exposure to chlorpyrifos can cause neurological problems in humans comes as no surprise. The agency has a history of questioning the chemical’s safety. In 2000, after exposure to very high doses of chlorpyrifos was found to cause horrific birth defects in children, the EPA banned all in-home uses of the insecticide, including as termite bombs.

The EPA is now conducting health assessments for all 22 other registered organophosphates on the market. The agency has already completed preliminary assessments for seven of these pesticides – dimethoate, dicrotophos, chlorpyrifos-methyl, tribufos, terbufos, profenofos, and ethoprop. Each inhibits the action of an important enzyme in human nerve cells.

A recent report by the California Department of Pesticide Regulation listed several pyrethroid pesticides that can be used as alternatives to the organosphosphates.. Pryethroids are synthetic compounds related to a natural extract of the chrysanthemum plant.

Unsurprisingly, chlorpyrifos manufacturer Dow AgroSciences believes that the EPA could protect the public from the chemical by taking actions that fall far short of a complete ban.

“Dow AgroSciences continues to believe that essentially all outstanding EPA regulatory issues relative to chlorpyrifos can be resolved with a more refined analysis of Agency exposure modeling data,” company spokesperson Garry Hamlin said in an email.

Meanwhile, food and farming activists in Hawaii fear that Dow and other companies conducting genetically modified seed research on the islands will try to continue using chlorpyrifos in their open-field experiments, given that seed crops are technically not considered food. According to the state Department of Agriculture, 7,282 pounds of chlorpyrifos were sold in Hawaii during 2014.

“Dow AgroScience, the largest supplier of chlorpyrifos in Hawaii, has no intention of stopping its use and will be fighting the EPA every step of the way,” said Gary Hooser, a member of the Kauai County Council.

But Hamlin said that, “given that EPA has not yet determined what action that it will take regarding chlorpyrifos, any conclusion about what effect that action might have on the use of chlorpyrifos on Hawaii would be entirely speculative.”