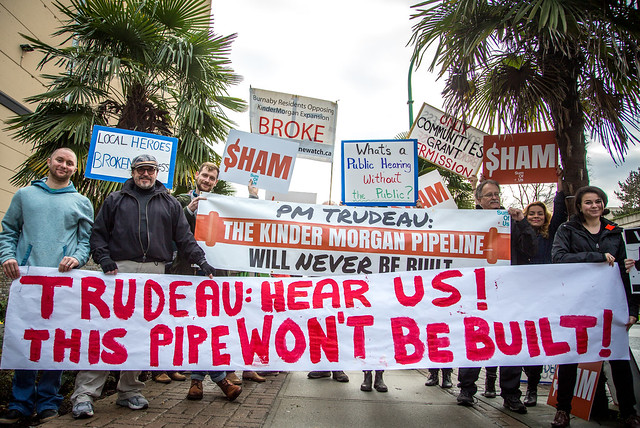 Photo courtesy of SumOfUsThe decision didn’t come as much of a surprise, given that the National Energy Board members were hand-picked by former prime minister, and friend of the oil patch, Stephen Harper.

“All this has accomplished is to escalate this issue and exacerbate an already volatile situation,” says Grand Chief Stewart Phillip of the Union of BC Chiefs. “In many ways, it’s a call to arms for the multitude of Indigenous groups and other interests.”

Phillip was one of 130 people arrested on Burnaby Mountain during a multi-day protest over Kinder Morgan’s plan back in 2014, and he sees more of the same in the coming months. “That was the first of many,” he says. “There’s no question it is going to be a long, hot summer.”

And Phillip is far from the only one who has made such claims. Burnaby mayor Derek Corrigan, has said he is prepared to get arrested to stop the project. Vancouver mayor Gregor Robertson has also said he does not want to see the pipeline approved, going as far as calling the NEB hearings a “sham.”

Kinder Morgan, the largest energy infrastructure company in North America headquartered in Houston, Texas, is proposing to expand the existing Trans Mountain capacity to 890,000 barrels per day by twinning the pipeline, reactivating 193 km of existing pipeline and adding new and modified facilities, including an expanded marine terminal in Burnaby. If approved, the project would increase tanker traffic in the Burrard Inlet seven-fold.

The 533-page report detailing the NEB recommendation follows 686 days of public hearings on the proposal. The recommendation comes with a list of 157 conditions that must be met prior to approval. The government has seven months to reach a final decision.

“Taking into account all the evidence, considering all relevant factors, and given that there are considerable benefits nationally, regionally and to some degree locally, the Board found that the benefits of the project would outweigh the residual burdens,” read an NEB statement issued on May 19.

Although the decision was greeted with scorn from environmental and First Nations groups across the country, it didn’t seem to come as much of a surprise, given the NEB members were hand-picked by former prime minister, and friend of the oil patch, Stephen Harper.

“The NEB has never said no to an oil pipeline,” says Sven Biggs, pipeline campaigner for the environmental group, Stand (formerly ForestEthics). “The real question is what Prime Minister Justin Trudeau will do — the final decision is his.”

Following the announcement, Trudeau released information regarding a new Trans Mountain federal pipeline review panel that will conduct a follow-up on the project’s feasibility. The three members appointed to the panel, Annette Trimbee, Tony Penikett, and Kim Baird, has immediately been under scrutiny for past connections to Kinder Morgan or other government interests.

Most questionable to Phillip was the past working relationship between Baird, who runs a consulting firm specializing in indigenous policy and development issues, and Kinder Morgan, which he calls a “glaring conflict.”

“I’m not the least bit impressed,” Phillip says. “They are just going through the motions and attempting to create an illusion that they are actually listening to our concerns.”

Six months ago, Trudeau’s campaign rhetoric leading up to Canada’s federal election was quite progressive, especially when it came to addressing climate change and repairing the federal government’s relationship with the country’s Indigenous peoples. After 10 years under Stephen Harper when the country’s environmental protections were gutted beyond recognition, Trudeau’s landslide electoral victory was likened to the dawning of a new era.

Fast forward a half a year, with COP 21 in Paris far in the rear view mirror, Trudeau is just as often heard supporting pipelines — Trans Mountain but also Energy East, and even the long-thought-dead Northern Gateway pipeline — as he is about seriously tackling climate change and letting hard science provide direction for progressive government climate policy.

“Unfortunately, aside from spectacular speeches and tons of commitments to First Nations in Canada and to repairing Canada’s international image in the context of climate leadership such as the 1.5-degree target in Paris, Trudeau continues to play two-faced,” says Clayton Thomas-Muller, campaigner for Stop It At The Source and 350.org, who finds it ironic that the Trans Mountain approval recommendation coincides with the government’s climate change “town hall” public consultations.

But things aren’t all negative. Just last week, Trudeau made good on a promise to remove Canada’s “objector status” to the UN Declaration on Rights of Indigenous Peoples. Thomas-Muller says this locks Canada into adhering to the many articles of the UN declaration that would be at odds with Trans Mountain approval, such as “the right to practice one’s cultural livelihood.”

For example, he says to look at the Tsleil-Waututh Nation in the Burrard Inlet, who could be severely impacted by potential pipeline leaks as well as leaks from the massive increase in tanker traffic that would come with approval. “They’ve invested so much human resources and money in repairing the harm done to the Burrard Inlet,” he explains. “This is the first year in three decades they’ve been able to harvest clams on the shores, and those fishing and harvesting rights are protected.

“The Tsleil-Waututh don’t want Trans Mountain expanded as the impending doom of a tanker spill would disproportionately impact their way of life,” Thomas-Muller said. “We are standing in solidarity with them and with Canadians across the country who want this government to take us into a new energy paradigm.”

The new review panel will report its findings to Canada’s Natural Resources Minister Jim Carr in November. A second pipeline project, Energy East — which involves repurposing an old gas pipeline and building a new one to carry 1.1 million barrels per day of tar sands crude 4,600 kilometers from Alberta to Eastern Canada — is still being reviewed by the National Energy Board.