A land exchange bill that proposes to swap thousands of acres of federal and private land to make way for a massive copper mine in Southeast Arizona was unexpectedly pulled off the House floor last month, much to the surprise, and relief, of anti-mining groups. 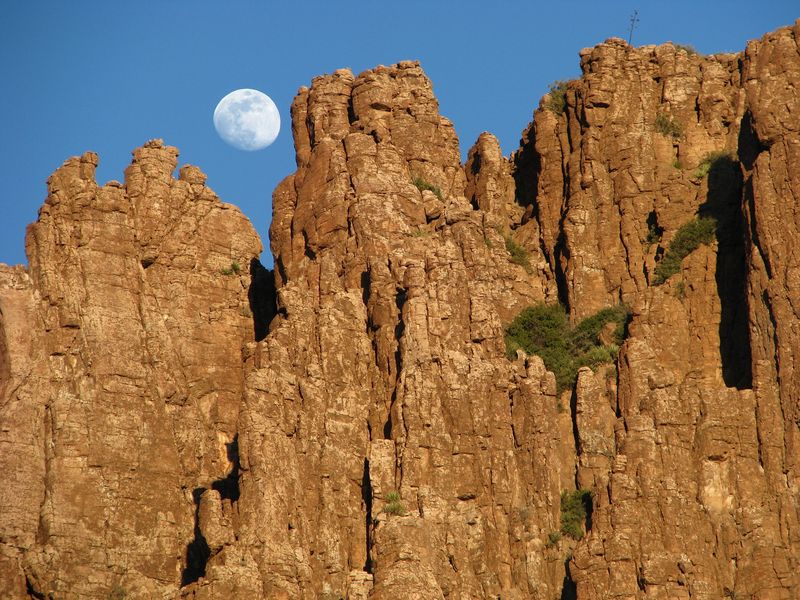 Photo courtesy Arizona Mining Reform CoalitionThe bill’s critics say the land exchange would imperil Apache Leap (pictured here) — a site where about 75 Apache warriors leapt to their deaths rather than face capture by the US Cavalry — that’s sacred to Native Americans.

HR 687, however, is one of those zombie bills that keeps getting killed but never quite dies. Twelve versions of the bill have been introduced in the US Congress since 2005, though none have ever made it to the Senate. This year’s version was left as “unfinished business” in the House of Representatives in the middle of the chaos on Capitol Hill that led to the government shutdown.

The company that would benefit from this land swap is Resolution Copper — a subsidiary of multinational mining giants Rio Tinto and BHP Billiton. If passed, the bill would give Resolution Copper about 2,400 acres of ore-rich US Forest Service land in the Tonto National Forest, including 760 acres in and around the historic Oak Flats Campground that’s currently excluded from mining by federal law. In exchange, Resolution is offering a package of 5,300 acres of “high-quality Arizona conservation lands” (in multiple parcels) owned by the company.

If the land exchange goes forward, it would constitute the largest give-away of public recreational land in US history, mine opponents say.

The forestland, 60 miles east of Phoenix, is said to contain one of the largest undeveloped copper deposits in North America. Resolution is planning a massive block-cave mine to extract the ore that is a cubic mile in volume and goes nearly 7,000 feet deep at its deepest point. The company says the mine — which would produce 1 billion pounds of copper a year — would be the largest copper producer in the country and would supply more than 25 percent of the nation’s copper needs.

Supporters of the land swap, including bill co-sponsors Congressman Paul Gosar (R-Prescott) and Congresswoman Ann Kirkpatrick (D-Flagstaff), say it would bring thousands of jobs and nearly $20 billion in federal, state and local tax revenues over the 40-year life period of the mine. (Staff furloughs because of shutdown have made our politicians harder than usual to access. After more than a week of trying to set up an interview with Congressman Gosar, I was sent a bunch of weblinks and a powerpoint presentation in response to questions that his staff said Gosar had addressed “numerous times.” I received no response to additional questions not addressed by the webpages.)

Opponents — including conservation organizations like Sierra Club, Defenders of Wildlife, and Audubon Society, as well as several local citizens’ groups and Native American tribes — worry about the environmental and cultural impacts of such a large-scale mine on land that includes historic recreation areas and sites sacred to Native Americans.

A key sticking point is that the bill would circumvent the National Environmental Policy Act (NEPA) requirement for federal review of the environmental and socio-economic impacts of land exchanges before the swap is made.

“The land exchange would bypass the permitting process all other mines in the country have followed,” says Roger Featherstone of the Arizona Mining Reform Coalition, a group that campaigns for responsible mining practices in the state. Conducting an environmental review after the land ownership has changed from public to private would be too late to save it. Featherstone says the exchange is the only proposal being considered by Congress that would privatize a Native American sacred site on public land.

The site in question is called Apache Leap. As legend has it, while fleeing the US Cavalry, a small army of Apache warriors were cornered on a rocky ledge overlooking what is now the town of Superior, AZ. Rather than face capture, about 75 warriors leapt to their deaths. The obsidian rock along the face of the cliff represents the tears of the mourners left behind.

Several Native American tribes — including the San Carlos Apache Tribe, White Mountain Apache Tribe, Fort McDowell Yavapai Tribe, Jicarilla Apache Tribe, InterTribal Council of Arizona, and the National Congress of American Indians — have passed resolutions opposing the land exchange. The latest version of the land exchange bill, HR 687, transfers ownership of Resolution Copper’s 110 acres along Apache Leap to the US Forest Service. But local tribes say transferring the surface land to the Forest Service doesn’t protect the area from the risk of subsidence if the company mines the ore underneath it.

The San Carlos Apache Tribe has been the most vocal of these tribes, going so far as to commission a separate study on the projected benefits of the proposed mine that concluded that a previous Resolution-sponsored study had exaggerated the jobs and revenues the project would create.

“The mining company study assumed there would be no costs associated with the project and grossly overstates the positive impacts,” tribe chairman Terry Rambler said in a statement. “Economic studies must consider both costs and benefits. Assuming that the mine is cost free, which is what RCM’s report presumed – and that the mine would only bring benefits – seriously misleads the public and the State of Arizona.” (Incidentally, authors of the two studies are now quarreling over who’s right, and it appears that there is some division within the Apache community over the issue, as this letter in support of the land exchange indicates.)

In addition to Apache Leap, the bill also targets the Oak Flat, a rare desert riparian area that President Eisenhower placed off limits for mining in 1955. The campground — which contains world-class natural resources for birding, bouldering, hiking, hunting, rock climbing and other recreational uses — receives tens of thousands of visitors each year. The Oak Flat area is also home ancient Native American settlements and burial sites.

The land swap is also opposed by former miners like Roy Chavez, who say they are not opposed to the mine in general but don’t want Resolution to be exempted from the due environmental process, especially since the land it is seeking offers the local community the potential to develop a diversified economy based on tourism and outdoor activity.

“We can’t afford to base our future on one single industry or employer,” says Chavez, who served as the mayor of Superior for three terms and represents a local group called Concerned Citizens and Retired Miners Coalition. He points out that mining markets are volatile and the industry always goes through boom and bust cycles. Besides, he says, advances in mining technology mean fewer people, with specialized training, are required for the job. (Read the coalition’s critique of the land swap here.)

“We don’t believe this method of mining will create as many jobs locally as they are projecting,” Chavez says. “When they came to me in the 1990s and said Superior would get the jobs, I laughed. They only thing we get as a town is income taxes, not direct taxes.” The company has not indicated that they will hire local labor and already Chavez is noticing that “75 to 80 percent” of the workforce at the local Resolution office is coming from outside Arizona. “We regularly see vehicles with license plates from Utah, Colorado and Mexico,” he says.

Critics also question why US national forest land and the rich resource beneath it should be handed over to a foreign mining company. (Resolution Copper’s parent companies are based in England and Australia.)

A bigger concern for old-time miners and environmentalists is the impact of the planned block cave mining method on local water bodies and the surrounding land surface.

Block cave mining is a relatively new method of mining that involves digging deep underground and creating an artificial cavern that fills with its own rubble as the ore body collapses. The broken ore is collected via a series of access tunnels built at the base of the ore body. As more and more ore is removed, large areas of the surface subside and form massive craters. “It’s basically an upside down pit,” explains Chavez. “You start excavating at the bottom of the ore body that’s 7,000 feet underground and when you’ve finished you got a void the surface collapses into. And of course long before that the water table gets buried.” Some call this relatively inexpensive bulk mining method the underground version of open pit mining.

“This kind of mining activity will almost certainly deplete and contaminate water resources and nearby watersheds,” says Jennifer Krill, executive director of the mining watchdog group Earthworks, pointing out that there are several surface water bodies and aquifers near the mine site. “Altering the surface and subsurface geological structure of this area via the impending subsidence will forever change the natural state of aquifers and drainage of watersheds throughout the region.”

Chavez says the overburden from such mining, which is mainly volcanic, compressed dust, is very unstable and can potentially cause destructive ground land slips. A similar Rio Tinto-owned copper mine in Utah’s Bingham Canyon suffered a massive landslide in April — about 165 million tons of earth slipped and covered 13 trucks and large containers holding 83,000 gallons of diesel fuel. It also buried 13,000 gallons of various types of oil, 5,000 gallons of coolant and grease, and a steel container full of thousands of pounds of explosives.

“There aren’t too many block cave mines around which means there is less institutional experience about what could go wrong,” says Krill.

Congressman’s Gosar’s office dismissed the issues raised by critics as “misinformation” that has been spreading for years.

Featherstone countered that much of the opposition was based on “commonsense,” since Resolution Copper hasn’t yet produced a “plan of operation” of its proposed mining activities that would have allowed watchdog groups to offer more specific critiques.

The fact that the bill got pulled off the Republican-controlled House floor is indication that more and more people are having doubts about the land exchange, he says. “These are never easy fights but there’s a reason why this bill has never made it any further than the House and the reason is it’s not good public policy. The lawmakers, at least the ones that are more reasonable, know that.”