The initial years following college graduation are daunting, a time when the fuzzy, warm mirage of an imagined future morphs into a harsh, though still unclear, present reality. For some new graduates, trading skinny jeans and picket signs for a sleek pantsuit and briefcase is what “growing up” means. Even the most idealistic sometimes abandon their aspiring life of activism – a conscious decision to sacrifice personal financial gain for the greater good – during this post-academic transition. Yet as I look at my peers, I see many people who remain committed to progressive change. So what, exactly, is motivating today’s graduates to continue on with environmental activism? I interviewed a range of up-and-coming environmental advocates across the United States to find out. 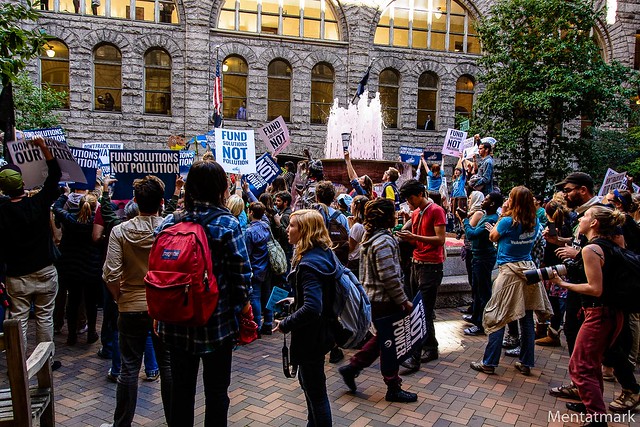 photo by Mark Haller, on FlickrA demonstration at PowerShift in 2013

“The thing that keeps me going now is knowing that I’m part of a larger movement that aims to create a paradigm shift in our society. It’s knowing that, at the core, this movement addresses structural problems,” says Victoria Fernandez, a University of California-Berkeley senior studying environmental economics and policy.

Coming of age within a tumultuous cycle of booms and (mostly) economic busts, many of today’s activist-minded college graduates are asking some tough questions about the sustainability of our social and economic systems. Why, for example, does our society continue to risk both human and environmental health for a financial system that is visibly broken? What’s blocking widespread human and environmental wellbeing? Who, exactly, is preventing sustained social, economic and environmental resiliency?

These questions have spurred young environmental advocates to consider the multi-faceted complexities of ecological issues. Environmental concerns, many Millenials realize, are intimately tied with the socio-economic struggles of our day.

“At first, I was only interested in the environmental effects of our actions, like what all that coal burning was doing to the lovely mountains that I used to hike and to the wildlife in the Great Smoky Mountains,” says Zach Bielak, a soon-to-be Rice University graduate and currently an environmental and social justice intern in Shenzhen, China. “Slowly, I began to adopt the word ‘sustainability’ as my main interest. It wasn’t until only a year ago that I really found out and understood that sustainability implies much more than just environmental. It involves social and economic as well. As I started to get deeper into the social side, I found I really started to love it: working to decrease social disparities, building up communities, taking the people that environmental technology affects into consideration when designing it. So now, I like to think of myself as a champion of environmental and social sustainability, two things that are utterly and fundamentally interconnected.”

The movement to “save nature” may have motivated a predominantly white, upper-middle class group of environmentalists in the past, but today’s advocates seek to include more than just a privileged few. “I think a lot of times environmentalism is perceived as a privilege of the wealthy,” Rice University environmental engineering senior and co-president of Real Food Revolution, Audrey Clayton, says. “And this isn’t without basis. If, for example, you’re struggling with providing enough food for your family, you’re not going to be worried about where it comes from or if it was grown sustainably or organically or not.”

This linkage of social, economic and ecological concerns drives a deeper form of “environmentalism” beyond just lobbying for nature reserves. This transition, recent environmental graduates realize, cannot occur without cross-sector coalitions of support.

“The environmental movement has shifted to encompass economic and social justice movements. What was once primarily a white, middle to upper class, conservationist movement has now become a diverse community committed to advancing justice through climate mitigation, economic development, and socio-cultural education and policy,” says Zen Trenholm, development director of the California Student Sustainability Coalition (an Earth Island Institute-sponsored project), and an aspiring cooperative developer.

Today’s environmental issues are very real, and young people know this. Americans aged 18-29, according to a recent Gallup poll, are almost unanimously in agreement that climate change is occurring and that humans are responsible. Yet even as they express concern for the environment, ideal-driven Millenials are shedding some of the old labels connected to their line of work.

“I do not think I am an activist. Mostly because the word is incredibly charged and I am not really an idealist when it comes to solving problems,” says Katrina Klett, a Truman Scholar and migratory beekeeper. Recent University of California-Berkeley graduate and West Virginia environmental justice and water security worker, Gabe Schwartzman, echoes Klett’s hesitation. “I have a fear that the term may perhaps polarize and delegitimize people’s work.”

“I think most Americans today perceive ‘environmentalists’ in a mostly negative light, and that’s partially because of the limitations of the label ‘environmentalist,’” says Manon von Kaenel, a UC-Berkeley environmental science and geography senior. “Everyone responds to money and the economy, and often prioritizing the environment is viewed as a deterrent to economic growth. The way I see it, an investment in our environment is an investment in our economy because it means we are improving the long-term health of our society, but not everyone sees it that way because of events in the past that have set up the ‘environment’ and the ‘economy’ as two separate entities vying for our time and energy.”

Matthew Eastman, an Elon University interactive media graduate student and environmental documentary filmmaker, has similar concerns with the exclusivity of an “outdated” perception of environmentalism. “The word ‘environmental’ is often misunderstood. ‘Environmentalism’ encompasses many other attributes like policy, economics, social factors, research and communication. It’s a broad term and unfortunately many people still think of the 1960’s version of a ‘Hippie’ when the term ‘environmental’ comes up. Those people are behind.”

Young people who are contemplating a life of passionate engagement as opposed to the accumulation of wealth are often told: You can either do what you love and be poor or, you can make money. This binary, however, doesn’t fly with today’s young environmental advocates. Happiness, economic stability, environmental justice, and cooperation are all possible – and it’s not naïve or idealistic to believe so.

“Yes, I will always do environmental work. What else can we do? We are here, and things are not good,” beekeeper Klett says. “But it is like we are on a ship that is slowly sinking. You can’t jump off, there are no life boats, so even if you feel overwhelmed you may as well grab a bucket and start bailing water, cause there is simply no other option. But, I try not to be too much of a crusader. Bailing water on a sinking ship is more fun if you drink beer with friends while you do it.”

If this decade’s batch of environmentally minded graduates proves anything, it’s that leaving the 17-year conveyor belt of structured education, exams and papers does not mean ideals have to be abandoned. If anything, it demands a more aware and sophisticated approach to addressing the complexities of the day’s ecological and societal issues. The current state of our environment is a very real problem, felt by very real young people searching for a very real future of their own. What’s more practical than that?