Three members of the radical environmental organization Deep Green Resistance and two other individuals were detained for more than seven hours at the Peace Arch border crossing between Washington State and British Columbia on their way to Vancouver to attend a talk by author and activist Chris Hedges last Friday, September 25. They were questioned about the organizations they were involved in, their political affiliations, and their contacts in Canada before being turned away by Canadian border agents. Upon re-entering the United States they were then subjected to another round of questioning by US border agents. The car they were traveling in as well as their personal computers were searched. 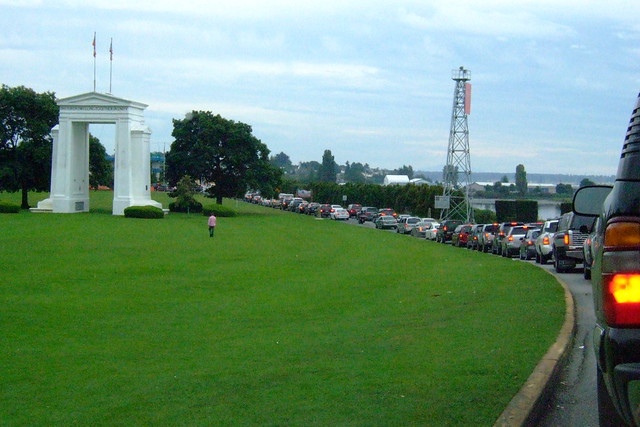 The interrogation comes on the heels of an FBI inquiry into Deep Green Resistance last fall in which more than a dozen members of the group were contacted and questioned by FBI agents. Several months later the group’s lawyer, Larry Hildes, was stopped at the same border crossing and asked specifically about one of his clients, Deanna Meyer, also a Deep Green Resistance member. During the 2014 visits, FBI and Department of Homeland Security agents showed up at members’ places of work, their homes, and contacted family members to find out more about the group. Meyer, who lives in Colorado, was asked by a DHS agent if she’d be interested in “forming a liaison.” The agent told her he wanted to, “head off any injuries or killing of people that could happen by people you know.” Two of the members detained at the border on Friday were also contacted by the FBI last fall.

Since Hildes was last held up at the Peace Arch border crossing in June he filed a complaint with the Department of Homeland Security’s Traveler Redress Inquiry Program. In August he received a letter from the DHS saying the agency “can neither confirm nor deny any information about you which may be within federal watchlists or reveal any law enforcement sensitive information.”

It’s not only Deep Green Resistance members who have had trouble getting across the border. Environmental activists who were part of a campaign in Texas opposing the Keystone XL pipeline were the targets of an FBI investigation in 2012 and 2013 and have also been denied entry into Canada. At least one of those activists, Bradley Stroot, has been placed on a selective screening watchlist for domestic flights.

Do you like enterprising journalism on the environment like this? Make a contribution to our investigative fund.

Nearly all of the activists involved are US citizens who have not had issues traveling to Canada in the past, leading them to believe that the recent FBI investigation and interest in their activities has landed them on some kind of federal watchlist. According to Peter Edelman, an immigration attorney in Vancouver, there are three broad categories under which Canadian border agents may deny entry to a foreign national: If they suspect you are entering Canada to work or study or you clearly don’t have the financial resources needed for the duration of the visit; if you pose a security threat to Canada or are a member of a terrorist or criminal organization; or if you’ve committed certain crimes. Edelman says that US citizens tend to get targeted more easily at the Canadian border because of the various information- sharing programs between the two countries. As soon as they scan your passport, border agents have access to a whole host of state and federal databases. Still, Edelman says, “Who gets targeted and who doesn’t is definitely an exercise in profiling.”

On Friday, September 25 Deep Green Resistance members Max Wilbert, Dillon Thomson, Rachel Ivey and two other individuals not affiliated with the group drove from Eugene, Oregon to attend the talk by Hedges, which was a collaboration with the Vancouver Rape Relief and Women’s Shelter and the Asian Women Coalition Ending Prostitution. They got to the border around 1 p.m., told the border agents where they were going, and that they’d be returning to Oregon the next day. They were then asked to exit their vehicle and enter the border control facility, where they assumed they would be held briefly before continuing on their way.

Instead, they ended up spending four hours on the Canadian side, each questioned separately. At one point, an agent came into the building carrying Wilbert’s computer and notebooks. He asked the agent what they were doing with the computer and was told they were searching for “child pornography and evidence that you’re intending to work in Canada.” The agent also said they were “not going to add or remove anything.”

According to Edelman the searching of computers and cell phones at the border has become standard procedure despite the fact that there are questions about whether a border search allows for such invasive measures. Border agents take the view that they are permitted to do so, but the legal picture remains murky. “The searching of computers is an issue of contention,” Edelman says.

After four hours of questioning, all but one of the travelers were told that they would not be allowed to enter Canada. Wilbert, who grew up in Seattle and has traveled to Canada many times without incident, including as recently as January 2015, was told that they were suspicious he was entering the country to work illegally. A professional photographer, he had volunteered to take pictures of the event, which he had openly told the agents. “It was pretty obvious they were grasping for straws,” Wilbert says. “Under that level of suspicion you wouldn’t let anybody into Canada.”

The other three individuals were told they had been denied entry for previous political protest-related arrests. Rachel Ivey, a Deep Green Resistance member arrested in 2012 during a protest near the Pine Ridge Oglala Sioux Reservation in South Dakota, had traveled to Canada in December 2014 without any problems. The one individual allowed entry had no prior arrest record or explicit affiliation with any political groups. (Interestingly, several Deep Green Resistance members traveling separately, including one of the group’s founders, Lierre Keith, were allowed to pass through the border and attend the event.)

After being denied entry to Canada, the group turned around and attempted to reenter the United States, at which point they were again pulled aside and told by US border agents to exit their car. The group was then subjected to a similar round of questioning that lasted three and a half hours. This time, US agents took three computers from the vehicle into the border control facility and kept them for the duration of the interrogation.

According to Wilbert, the questions on the American side were more obviously political. Agents wanted to know the names of the groups they were involved in, what kinds of activities they engage in, what they believe in, and who they were going to see.

“It seemed very clear on the US side that they had already come to conclusions about who we are and what we were doing,” Ivey says.

Around 8:30 p.m. they were told they could leave and that it had been nothing more than a routine inspection.

Wilbert doesn’t see it that way. Two days later he got a new computer and says he plans to get rid of the one seized by border agents. Despite assurances from the border officials that nothing was “added or removed” he says, “We feel like everything we do on those computers will never be private.”

“It was pretty clear to us that it was an information gathering excursion,” says Wilbert. “They had an opportunity to harass and intimidate and gather information from activists who they find threatening.”