When fishermen lose control of a fishing net or abandon a torn net at sea, the nets float around on the water surface or deep within the sea, ensnaring and killing millions of fish and marine mammals every year. Poetically called “ghost nets,” these are hardly-ethereal nets are usually made of heavy-duty nylon and hang on in the waters for years and decades causing repeated injuries and deaths of aquatic animals. Even after these nets fall to pieces, they continue to be a part of the ocean plastic pollution problem since they are ingested by birds, fish and other marine life.

Last fall, Alejandro Plasencia, Roberto Pla, and Joan Farré, a trio of student engineers in Spain invented the Rémora System to make management and recapture of ghost nets feasible. Their invention, which could help save hundreds of marine animals that get entangled and killed by abandoned fishing nets every year, was so appealing that it promptly won the James Dyson Award (an international student design award).

How does the Rémora System work? The two-part system consists of a biodegradable net attached with tags embedded with radio-frequency identification (RFID) chips, an RFID reader, and a smartphone app. The tags monitor the net’s integrity and location, allowing fishermen to either find and repair the nets or declare them lost, upon which they could be collected by nonprofits or government agency involved in marine debris retrieval work.

“Those RFID tags are a game changer.” Plascencia says. The tags use low energy Bluetooth technology and have coin-sized batteries that can last up to a year. “What they do is emit a device ID over and over again, so they are perfectly reusable and recyclable,” he says.

The nets are made of a polyethylene mixed with an additive that would cause the product to start biodegrading after four years. The engineers’ hope is that with the sped up ability to biodegrade, these new nets could reduce the amount of plastic floating around the ocean.

To help put the new products in the context of everyday practices, Plascencia explains how fishermen usually use nets these days: “Each time the net is deployed the net is pulled out thanks to a power block and then carefully folded in the ship’s deck. Many sailors have to check every inch of the 36 hectares of the net to ensure there are no missing parts and then fold it carefully on the back of the deck. If there is any missing zone in the net a knot is tied with a brightly colored plastic fabric to tag it.,” he says. “When all the fish are stored, fishermen sit on the deck and search for the plastic knots and repair the net by sewing new pieces of fabric. If the rags are too big, and complex to fix by the crew, the fishing company calls a net specialist, who usually arrives by helicopter.”

“With Rémora, fishermen can retrieve the net, or declare it as a lost net —international waters laws can’t penalize these kind of behaviors — and notify NGO’s like Healthy Seas Org which can recover the lost nets,” he says. Plasencia estimates the nets would cost 15 to 20 percent more than nets currently in use, but fishermen would ultimately save money by being able to easily locate points in the nets that need repair and thus be able to use them for longer. 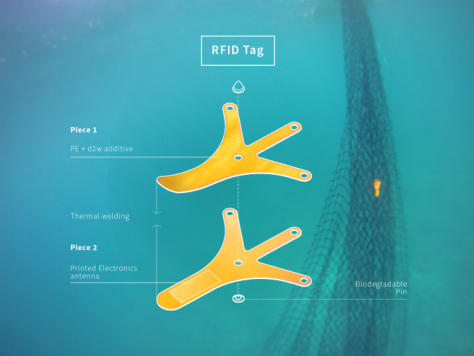 Conservation groups from many countries — including World Wildlife Fund, Blue Planet Society, Upcycle the Gyres Society, and Fish 2.0 Org — are lining up to help try out this new system for one simple reason. As Plascencia explains: “Ghost nets not only keep on capturing fish, which has a negative impact on the fishing industry, but they also capture cetaceans like dolphins, whales and tortoise. It is in no one’s interest to have this.”

The project’s focus has been on designing nets / RFID tags for the tuna industry. With the rates that tuna garners by the pound, especially in Japan, it may seem odd that a nonprofit is the only entity able, willing, and funded to go to pick up a lost net rather than the owners of a wealthy tuna boat fleet. However, without any legal requirements for a tuna boat to do so, there is no direct incentive for fleet owners to change current practices. The culture of “pick up your own trash” that works so well in places like Sweden and, say, preschools, has not carried over to much of the marine world — plastic debris and cast-offs from marine vessels make up to 40 percent of all plastic debris found in our oceans.

Should governments require these tags on all commercial fishing nets, the market for this product would be enormous. Logically, commercial fishermen may recognize that using this system would help them maintain the fisheries upon which their livelihoods depend. It would be incredible to have governments fund the manufacture of these tracking devices and give them away free to commercial fishermen, says Dr. Randal Orton, a marine biologist and environmental consultant based in Oxnard, California who specializes in ichthyology (the study of fish).

While the idea of an RFID tag to manage ghost nets is great, there are some hitches. For one, the engineers are college students who dreamed up the concept, so there are no factories churning out the RFID tags or the new improved nets yet. Neither have the students had the resources to conduct trial runs of their product. In the absence of field trials, it’s hard to assess how long the tag can send messages in the water or to how many meters down the messages can still be captured and read.

Questions about how temperature speeds up or slows down the special nets’ accelerated biodegradation also remain unanswered. In any case, it’s not as if smaller particles of plastic are necessarily more benign. Biodegraded nets aren’t any more nutritious for marine life that might ingest them than other plastic debris. Besides, opinions differ on whether and how plastics can be completely biodegraded (Check out this overview from NOAA, for instance.)

Some of these issues, especially with regard to trials and marketing could be addressed swiftly. Already, two companies — the United Kingdom-based Symphony Environmental Technologies and the Belgium-based Kaneka Corporation — have offered to help with trials, manufacturing, and marketing strategies. In addition, the three inventors are looking at crowdfunding options. “But nothing definite still,“ Plascencia says, regarding next steps. “The truth is we are still trying to figure out what will be our strategy in trying to make the project become truth.”