When we think of roads and highways, images of cars and trucks whizzing by comes to mind. But what does the side of the road look like? Try picturing your local highway — is it littered with trash? Are there any plants? What about barriers or fences?

When Claudia Alta “Lady Bird” Johnson, the First Lady and wife of President Lyndon B. Johnson, contemplated roadsides back in the 1960s, she envisioned a space where ugly billboards were replaced with native wildflowers and plants. Today, this idea of roadside ecology is just beginning to come into vogue as more scientists start to ask how we can better design the margins of roads to create habitat and support local ecology. 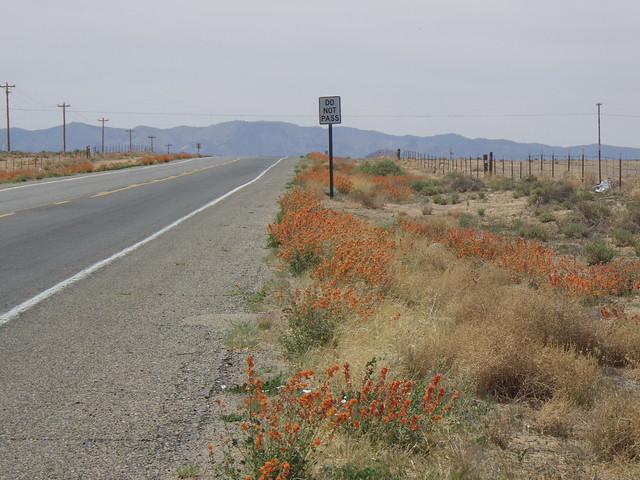 Photo by Matt Lavin Native flowers grow along a road in New Mexico. Some ecologists say that roadside areas can provide important habitat for native plants and pollinators.

Johnson brought the concept of aesthetically-pleasing road improvements to the fore during her time as First Lady. In 1964, she helped create the Society for a More Beautiful National Capital to improve the aesthetic of Washington DC. The nation’s capital became a staging ground for cleaning up trash, improving parks, and planting flowers along roadsides. In Johnson’s view, this was a way to promote the mental health of a nation suffering from prolonged exposure to the turmoil of the Vietnam War.

Helping craft the Highway Beautification Act of 1965, Johnson hoped to minimize the ubiquity of billboards along highways and promote the planting of wildflowers across the country. But there were enough loopholes in the bill that today there are more billboards along highways than when the bill passed. The vision of lush, plant-filled right-of-ways was not realized either.

Despite these setbacks, Johnson’s time as First Lady was marked by her continuous advocacy for the beautification of roadsides, neighborhoods, and natural areas. She was instrumental in realizing the passage of landmark conservation laws, such as the Wilderness Act of 1964 and the Wild and Scenic Rivers Act of 1968. And in October of 1982, long after her time as First Lady had ended, Johnson further solidified her conservation legacy by founding the National Wildflower Research Center, later renamed the Lady Bird Johnson Wildflower Center. It will celebrate its 35th birthday this year, and with it, a commitment to landscape ecology and research.

Johnson illustrated her intentions for the Center in a letter welcoming visitors to an early version of the organization’s website:

“My hope for what lies ahead in the field of landscape design—our own and that of the professionals—isn’t a revolution against the use of non-natives, but a resolution to educate ourselves about what has worked for Mother Nature through the ebb and flow of time and to put that knowledge to work in the planned landscapes that are everywhere a part of our lives.”

This idea of using research to create beautiful and ecologically-functional roadsides using local species native to the landscape was ahead of its time. And there is still much to gain in using this approach to address contemporary conservation challenges.

“We are solving problems using the science of ecology as our lens and native plants as our most versatile and powerful tool,” Michelle Bertelsen, an ecologist and land steward at the Center said via email.

The Center has done a variety of research on its 284-acre campus in south Austin, Texas including understanding the interactions between native and invasive plant species. This research helps inform the Center’s applied consulting program, through which the Center’s environmental designers work to restore native landscapes across Texas, including in cities such as Dallas.

The idea of creating good wildlife habitat in urban areas and along roadsides can be a bit counterintuitive. Roads often diminish habitat by fragmenting it into smaller pieces, and wildlife that attempt to cross roads risk getting hit by vehicles — this is a major issue for some species of animals, including frogs. (Studies show that other species avoid roads due to noise pollution or the road surface.)

Yet there is evidence to suggest that we could be doing more to allow certain kinds of wildlife to circumnavigate roads while also creating and improving habitat along these right-of-ways. Considering that there are 47,000 miles of freeways, and 17 million acres of roadsides across the United States, there is arguably a lot of potential space for habitat enhancement projects.

Indeed, though habitat alongside roads may never be the highest quality, research shows that some species can make use of roadsides given the appropriate conditions. A study of roadsides in the upper US Midwest found that monarchs could complete their lifecycles along highways that harbored a certain density of their host plant, milkweed. Roadsides can also support a variety of other pollinators, including bees, moths, and flies, as well as birds and small mammals.

Steven P. Brady, an environmental scientist who studies the impacts of roads on the evolution of nearby amphibian species, says enhancing roadside ecology could also have benefits when it comes to pollution. Runoff from roads often pollutes adjacent habitat — mitigating the impact of the pollution would benefit many kinds of species. He points to salt, applied during the winter to prevent freezing, as an example of a pollutant than can harm nearby habitat. Roadside maintenance activities — like herbicide spraying — can also contribute to this pollutant stream. Installing plants along roadsides instead of mowing or spraying, could help slow the flow of runoff, allowing it to be absorbed and filtered by the soil and preventing the transit of contaminants.

Bertelsen says that there are a variety of things highway planners can do to promote wildlife-friendly habitat along roadsides. Focusing on the creation of native plant communities that support pollinators is a good strategy, she says. “Appropriate plant communities can provide for the full life cycle of an animal (from caterpillar to butterfly and from chick to adult bird).” Many of these plants are beautiful, she added, and would improve the general look of roadsides.

Species that need a lot of space, such as mountain lions, could also benefit from projects that allow them to cross roads when appropriate, reducing collisions with cars. “We need research to identify sections of road that are likely to have wildlife crossings,” Zara McDonald, founder and president of the Felidae Conservation Fund, which researches and promotes wild cat conservation, said via email. With this data, scientists and transportation planners can strategically design and place overpasses and under-crossings. Crossing structures are best implemented in areas where there is suitable habitat on both sides of the road, McDonald says. If there is only suitable habitat on one side of the road, a fence or other deterrent should be installed, McDonald says, to discourage crossing.

The idea of creating habitat along roads also raises questions about the role of wildlife in our everyday lives. Beth Pratt-Bergstrom, the California regional executive director for the National Wildlife Federation, recalled her life-changing experience learning that a mountain lion named P22 had taken up residence in a park in Los Angeles. It made her rethink her ideas about where wildlife “belong.” She now sees a place for wildlife not only in parks and protected areas, but also in urban areas.

“The old argument that urban people don’t have to deal with wildlife doesn’t ring true anymore,” Pratt-Bergstrom said, speaking by phone. She has found that many people living in cities “want that connection to wildlife.”

“Getting people to build this day-to-day connection with these animals” can help facilitate the creation of more urban wildlife habitat and connectivity between areas of good habitat, she said. Case in point? The story of a lonely, dateless, disconnected cougar in Los Angeles catalyzed public demand for the creation of a wildlife crossing over Highway 101. As far as Pratt-Bergstrom can tell, it is slated to be the largest overcrossing in the world, and the only major crossing in an urban area. (Read more about Pratt-Bergstrom’s work here, and about P-22 here.)

“We need to stop thinking of nature as a place to go to,” she said. “People that can never get to Yosemite still deserve a connection to nature.” The National Wildlife Federation’s long-standing program to facilitate the creation of wildlife habitat in people’s home gardens has taken on even more importance in light of its potential to create large areas of interconnected habitat. They are even considering a program to install mini gardens on top of bus stop shelters in the Los Angeles area.

With an increasing public interest in fostering quality wildlife habitat, and more researchers exploring how we can improve the habitat value of urban areas and human-altered landscapes, we seem to be on the road to more ecologically-mindful highways. Lady Bird Johnson would be proud.