A sugarcane farm probably isn’t the first place that comes to mind when most people picture hippo habitat, much less a sugarcane farm in the hot, dry southeastern corner of Zimbabwe. But thanks to well-managed water storage and irrigation systems, that’s exactly where visitors can find one of Zimbabwe’s most unlikely hippopotamus refuges. Fittingly named Hippo Valley Sugar Estates because of the many hippos that live here, the question most people ask when they arrive is always, “So where are the hippos?”

​Around Zimbabwe, sand mining, water-bed cultivation, and gold panning, among other activities, have decimated many water bodies that hippos rely on as habitat. Photo by Michael Levine-Clark.

“If you understand the behavior of hippos, the answer is simple and straightforward,” Stanley Mugonderwa, an irrigator at one of the sugarcane farms in the estates, told me when I asked him that familiar question. “They are in the water where they are always found during the day.”

There is a lot of water at Hippo Valley Estates, despite a climate that is characterized by droughts. In Zimbabwe, this 44,000-hectare sugar farm is generally regarded as a good example of agricultural ingenuity and sustainable water management due to the many local catchment ponds, and the well-maintained irrigation canals. In addition to local ponds, water is piped from major dams like Mutirikwe and Bangala that are more than 100 miles away. In the estates, the water is then stored in reservoirs and earth dams that are scattered around the area, something that makes Hippo Valley the home to the largest concentration of small earth dams in Zimbabwe.

Where there is water there will always be hippos in Zimbabwe, and in Hippo Valley there are many of them. The region was, after all, named for its hippopotamus population, though an official estimate of the population size is hard to come by. And the hippos have a good reason to be here. Hippos — whose closest living relatives are whales and dolphins — require water to survive. Their skin must remain wet much of the day.

Around the country sand mining, illegal fishing, water-bed cultivation, and gold panning have decimated many water bodies, posing a threat to the animals, which are listed as vulnerable on the International Union for the Conservation of Nature Redlist. The illegal destruction of rivers and other water bodies is so rife that the Environmental Management Agency (EMA) now deploys officers to monitor and guard some water bodies around the clock. (In addition to habitat loss, hunting poses a significant threat to hippos, which are targeted for their meat as well as for their teeth, a source of ivory.)

But in Hippo Valley, it is quite a different story. The farmers who depend almost entirely on earth dams for irrigation jealously guard them on their farms. Undisturbed by mining, fishing, or other human activities, these man-made, small dams of freshwater provide hippo-friendly homes. They also make it difficult and sometimes impossible to encounter or see the animals. During the day, most of the hippos spend their time in the thickly vegetated parts of the dams and only get out to feed at night under the cover of darkness. 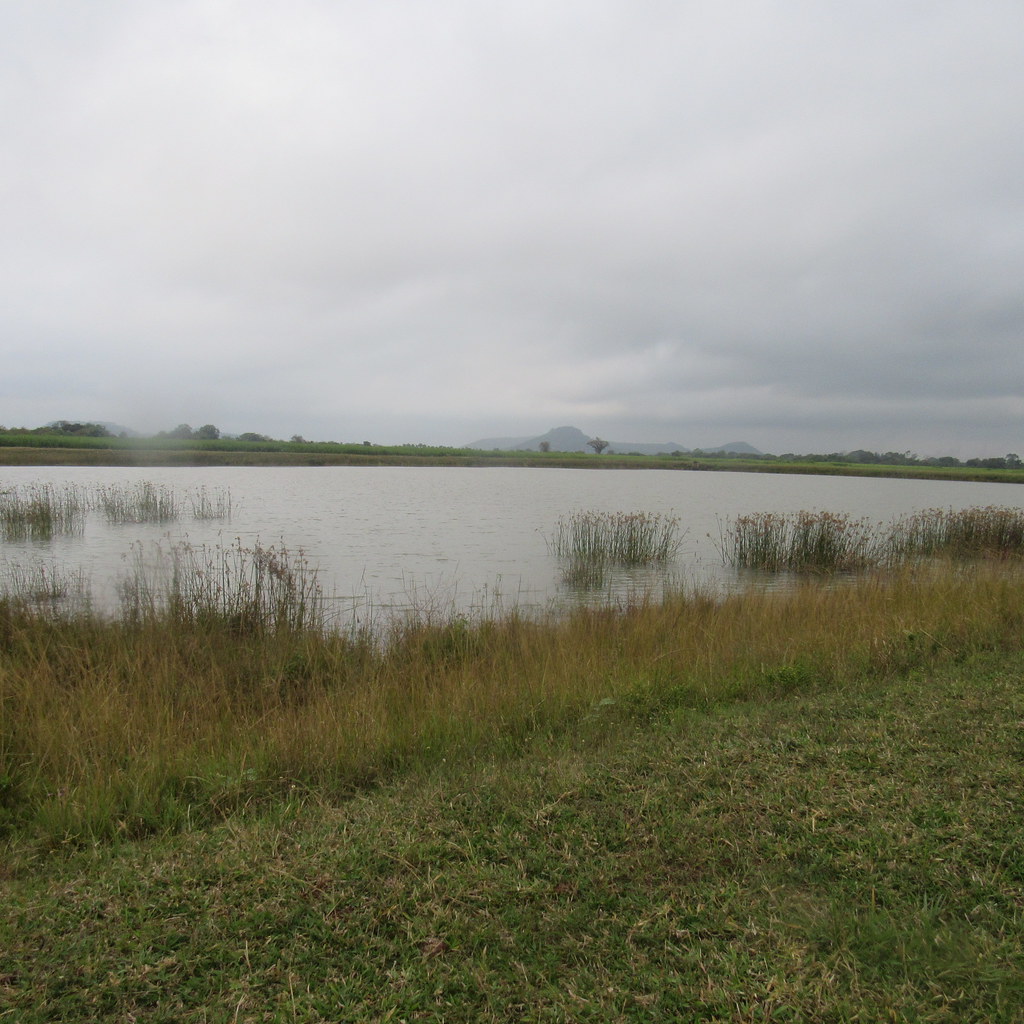 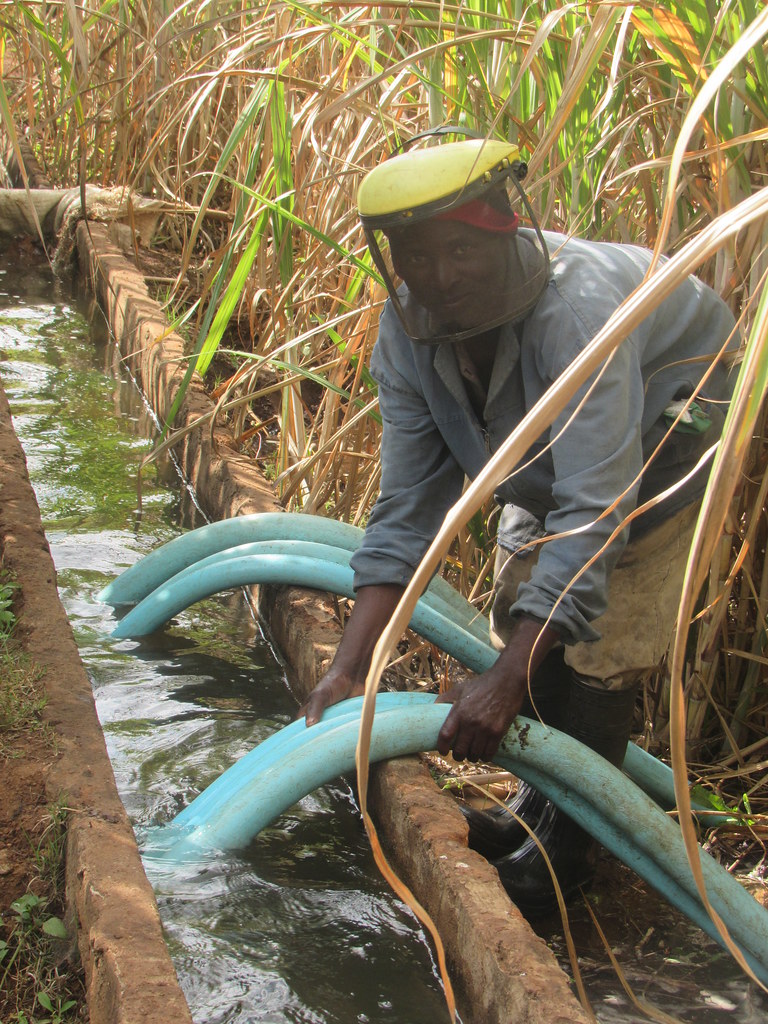 Stanley Mugonderwa, an irrigator at one of the sugarcane farms in the estates, often comes across hippos while working. Photo by Cecil Dzwowa.

“If you want to see them you have to look for them in the water,” Mugonderwa told me before I left. “But that is something I would not advise you to do.”

That was good advice. Even though they are herbivores, hippos are the most dangerous animal in the world, killing an estimated 500 people across Africa each year. In 2017, they killed 44 people in Zimbabwe alone. In a way, this fierce reputation helps them to live relatively private or even secret lives in the earth dams. In and around the sugarcane estates, signs warn people to watch out for hippos, and very few people dare to defy them.

The farmers, too, know the dangers posed by the hippos in their backyards. Nonetheless, many view the animals as a sort of a necessary evil. “Yes, hippos are a threat to me and my family because of their unpredictable behavior,” Driamond Chinounda, a farmer whose homestead is roughly 300 yards from a dam that is home to several hippos, told me. “But I don’t mind their presence because without these hippos the dam will be destroyed by sand poachers and illegal fishermen and without irrigation water, there is no farming to talk about here.”

What makes Hippo Valley Estates a good secluded home to hippos is not only the water. The vast cane fields also provide a good protection for the hippos. Hippos are quite territorial animals that always know their territories in and out. Around the estates, when they encounter people, they quickly sneak into the sugarcane fields. Sometimes, they use the sugarcane and the densely vegetated bushes in the estates as cover to move from one dam to another without encountering or drawing the attention of people.

This use of the cane fields, however, can be a major source of conflict between the farmers and the hippos. Hippos are grazers and young sugarcane plants are one of their favorite snacks. During the night, they often invade fields to feed on the cane. A 3,000-pound hippo passing through a field can do damage even to a mature crop. During years of drought when wild grass is sparse and such problems are common, some farmers employ full-time guards to fend off marauding hippos in their fields at night, though it is illegal to shoot hippos — and any other wild animals — even if they invade crops. Even among those who have insured their crops, farmers say it is very difficult to receive compensation for wildlife-related losses.

“There is nothing to do about it except to pray so that hippos don’t invade your fields,” Tich Dzenge, a farmer whose plot is between two earth dams, revealed. “Unfortunately, you will never know that you have hippos around you until they leave a trail of destruction.”

Despite the challenges, many farmers have now adapted to living alongside these elusive and sometimes destructive animals. Tolerated by farmers, and protected by the law, a fierce reputation, and a keen ability to maintain a low profile, the hippos of Hippo Valley have survived and thrived.

“Hippo Valley Estates is a perfect example of sustainable coexistence between man and animals,” Langton Bandama, a wildlife guide who is often contracted to capture and move or drive out troublesome animals in the estates explained. “Here the management respect the rights of animals and the hippos have the food, undisturbed habitats, and a community that tolerates them despite the dangers they pose and the occasional losses they cause.”

Cecil Dzwowa was born in Chiredzi in southern Zimbabwe in 1970. He trained as a schoolteacher at Seke Teachers College with English as the main subject of study. Using this English teaching background as a launching pad, in 1999 he became a full-time freelance writer specializing. His articles have been published in Highlights for Children, Faces, Odyssey, and BBC focus on Africa among many other publications. Cecil is married and lives with his wife and children in Zimbabwe.