Several years ago, as a masters student studying ecology, I took a trip with friends to the Anaimalais (literally, Elephant Hills, in Tamil) in the Western Ghats, a mountain chain running down peninsular India. One day we were careening down a hillside to the town of Valparai in the last bus of the day (or rather the night), trying to peer at the shadows the headlights threw up and spot wildlife. It was all very exciting, but I cannot imagine what would have happened if we had come across an elephant standing on the road. 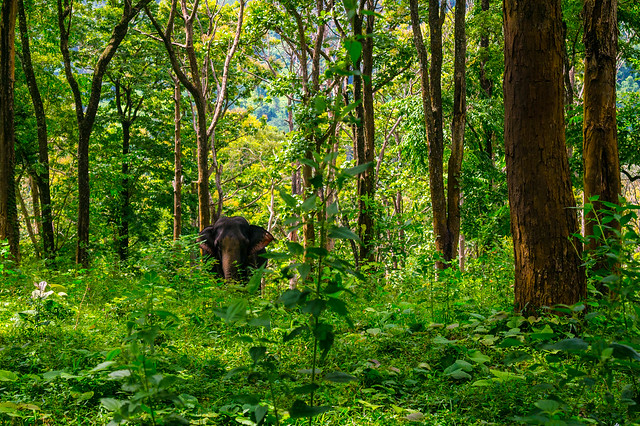 Photo by Thangaraj Kumaravel A new warning system in the Anaimalais is reducing elephant-human conflict.

Encounters with elephants and other wildlife in India are not rare. Often, animals enter human-modified landscapes, which the media frequently presents as a case of animals “straying” out of their habitat into human areas, requiring them to be chased back. Of course, these human-wildlife interactions can result in escalating conflict, even leading to death — of both humans and animals — and damage to property. Sometimes the situation gets so bad that authorities are pushed to capture or kill the animal. For example, in February 2015, a tiger in Tamil Nadu was declared a maneater after it killed a farmer and tea estate worker, and was put down. In other cases, the animals are captured and sent to zoos. On occasion, animals like the nilgai (an Asian antelope) are temporarily declared vermin in a specified region and people are allowed to kill them if they enter their property and destroy crops.

A 2015 Whitley Award-winning initiative in the Anaimalais shows how this conflict can be reduced and co-existence made possible. The program, which focuses on human-elephant conflict, was developed and implemented by the Nature Conservation Foundation (NCF), a wildlife and conservation research organization.

Valparai, a town in the South Indian state of Tamil Nadu, is an unassuming jumble of houses spread over several hillsides. The 220-square-kilometer Valparai plateau is known for its tea and coffee plantations, created by the British more than a century ago by clearing the rainforest. With the tea industry booming (though the last two decades have seen a reversal of fortunes), human population increased. With growth came roads, construction, and electricity. The plateau is surrounded by forests, most of which are protected areas. Today, the plateau is a mosaic of plantations dotted with clusters of houses (known as labor lines) for tea workers, and forest fragments. The plateau is also part of the home range of some 100 elephants that regularly cross the plantations to reach forests on the other side, leading to run-ins with humans. The human population of the plateau — mostly plantation employees — is about 70,000.

Elephants have learned that the labor lines are usually an easy source of food, as people grow bananas and store food grains in the ration shop, a center where government-subsidized food items are distributed to the poor. Schools are also popular with the elephants as they have a pantry. Often, people returning home at the end of the day encounter elephants on the roads or in the plantations, occasionally leading to human injury or death.

“In 2002, we started this project by tracking the elephants and understanding their behavior,” said M. Ananda Kumar, lead researcher on this project. “Our research showed that the elephants tend to follow certain routes faithfully, sticking to the streams and the little patches of tree cover along these waterways, as they cross the plantations.”

The elephants, say NCF, tend to spend the daytime resting and feeding in the forest fragments and then move at night. The tea gardens do not offer shade and so the elephants do not spend much time there. However, when they move across these landscapes or come into human settlements, people are scared and try to drive the animals away. This typically takes the form of loud noises to scare the elephants, including beating drums and bursting firecrackers. The stressed herd scurries away to the next plantation or settlement, and the cycle begins again. While these incidents usually don’t result in death of either humans or elephants, they produce a lot of stress for both. Human deaths and injuries can, however, occur when people startle elephants, often on the roads in twilight. Perceiving a threat, the elephants may react by attacking; there have been incidents of elephants throwing or pushing vehicles off the road.

“People’s tolerance of elephants has come down. The loss of property is not something viewed lightly, either by people or by the plantations’ management who are duty-bound to pay for the damages in the labor lines,” says Kumar. Plus, the media sometimes plays up this drama, feeding people’s hysteria. People, then, clamor for the government to take action, but the government has few options.

To understand what drives the conflict, Kumar and his colleagues, Ganesh Raghunathan and Sreedhar Vijayakrishnan, mapped the incidents of human deaths and found that out of 41 victims between 1994 and 2002, 31 had been unaware of the presence of the elephants prior to the incident. Plus, many of these run-ins took place between December and February, which coincides with the time when elephants frequently traverse the plateau. Many of these encounters took place on the road. NCF realized that what was needed was a good early warning system by which people could avoid run-ins with elephants, as well as education programs on elephant behavior and the best way to react in the event of an elephant encounter.

NCF initiated a two-part project. First, in partnership with the State Forest Department, plantation management (there are seven plantations on the plateau), and community members, NCF began sending out bilingual text messages (in English and Tamil, the local language) reporting elephant movement. Information on elephant locations was provided by the Forest Department, researchers, and community members. The messages went out to community members living in the area who were registered with the warning network. The information was also broadcast on local television channels warning people to avoid those areas or at least be vigilant.

The second phase of the project was to set up LED lights in 24 areas frequented by elephants and humans. The lights are operated by calling a number from a mobile phone — if someone sees an elephant, they call the number and the light is activated, alerting locals to the fact that there is an elephant in the region. The forest department, on its own initiative, has set up six additional lights, for a total of 30. The LED lights began functioning in early 2011 and were initially operated by researchers. Since then, volunteers from the community have taken over. “The community of course must have a sense of ownership on this endeavor and be able and willing to continue with it even if we are not working in this area,” says Kumar. “We are also hoping to hand over maintenance of the infrastructure to the plantations.”

The forest department has also set up a rapid response team and helpline to ensure that not only property and human lives are protected, but also that elephants are not harmed. “Our team reaches the hamlet within five minutes of being called,” says Asokan, the divisional forest officer for Anaimalai Tiger Reserve. “We then ensure no firecrackers are set off or stones thrown. People are requested to move away and we keep watch on the elephants until they move of their own accord into the forests.” He adds that the trust and confidence people have in his team has grown over the last few years.

Since the early warning system began functioning, human deaths have dropped by over 50 percent; there were, on average, three deaths per year between 1994 and 2002, compared to an average of 1.2 deaths per year since. In fact, in 2010 and 2013, no deaths were reported.

Much of this initiative is focused on human safety. So far, there has been little assessment of the impact on the elephants. How stressed are they? How are elephant populations faring since the warning system was installed?

Recently, however, an effort has been made to collect this data. In the last few years, NCF has started to analyze cortisol, the “stress hormone,” in elephant dung samples. The preliminary results indicate that human interaction is a stressor for elephants. Specifically, researchers have observed that elephants that have experienced a run-in with humans tend to have higher levels of cortisol for 48 hours than those that have not. The researchers have also noted that the herds seem to be spending more time on the plateau than before, which could be an indication that they feel safer.

Bolstered by the success of this project, the government is looking to replicate it in other regions where human-elephant conflict is an issue. Of course, the model might require tailoring to local situations, but the major gain has been that the government is now contemplating co-existence models instead of relying on knee-jerk reactions to conflict.