DuPont and Chemours Settle Teflon Toxin Lawsuit for Up to $921M

Last week, chemical giant DuPont and its spin-off Chemours Co. announced they would pay up to $921 million to settle roughly 3,500 Ohio Valley lawsuits over illnesses linked to a toxic chemical known as C-8 used during the manufacture of Teflon. 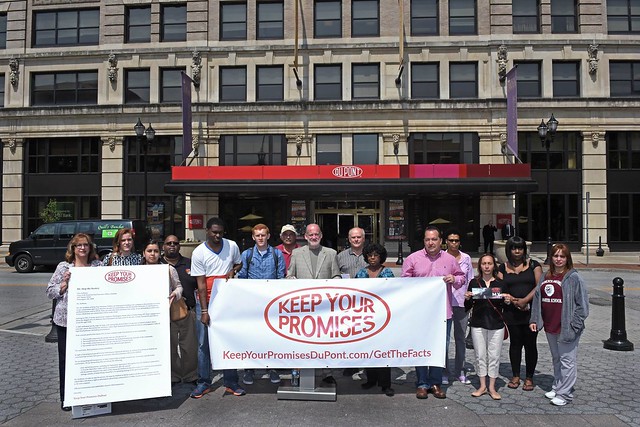 Photo by Photo courtesy of Keep Your Promises DuPontInternal DuPont documents uncovered during litigation showed that for decades, DuPont was aware the chemical C-8 was dangerous, escaping into the environment, and could be replaced — but that executives deliberately chose to keep using it for years because it was cheaper than alternatives.

The hazards of C-8 were first revealed to the public as a result of legal battles waged by attorneys in this case since 1998. Internal DuPont documents uncovered during litigation showed that for decades, DuPont was aware the chemical was dangerous, escaping into the environment, and could be replaced — but that executives deliberately chose to keep using C-8 for years because it was cheaper than alternatives.

Over a span of decades, hundreds of thousands of pounds of C-8 was dumped by DuPont into the Ohio River, where it found its way into the drinking water of some 70,000 area residents.

“No settlement can restore the health of the thousands of victims of DuPont’s C-8,” says Harold Bock, who lives close to the Washington Works plant and advises Keep Your Promises, a grassroots organization focused on C-8 exposure, “but we at Keep Your Promises are heartened to know that this long-awaited justice for these 3,550 members of our community is now within arm’s reach.”

DuPont and Chemours agreed to each pay half of the overall settlement, which provides a total of $670.7 million in cash to the plaintiffs, plus up to $250 million in additional payouts over the next five years.

DuPont told investors in October that the lawsuits included roughly 30 wrongful death claims, 270 claims of kidney or testicular cancer, and over 1,300 claims of thyroid disease.

Both companies admitted no wrongdoing in the settlement agreement, but will pay expected damages of roughly $1.5 million to each plaintiff with cancer, attorneys in the case said, and lesser amounts to those with other conditions. The full details of the settlement were not immediately made public and individual plaintiffs will have to agree to the negotiated terms before the deal becomes final.

In 2005, DuPont settled a related class action lawsuit over its pollution of the Ohio River for $70 million. That settlement also required that the company pay for water treatment in the region as well as fund research on the health of the people who had inadvertently consumed the contaminated water for at least a year. That same year, the US Environmental Protection Agency hit DuPont with the largest civil administrative penalty in history, ordering the company to cough up $16.5 million for its improper use and disposal of C-8.

Usually that would have been the end of litigation, but the attorneys in this case pressed onwards, using DuPont’s funding to pay for studies that found that Ohio Valley residents suffered from six conditions — including kidney and testicular cancers, high cholesterol and thyroid disease — and that those conditions were linked to their exposure to C-8. As part of the previous class action settlement, DuPont had agreed that if those independent court-appointed scientists found harm, the company would not be able to deny later that C-8 could cause those particular diseases in those particular plaintiffs.

Ultimately, over 3,500 Ohio Valley residents discovered C-8 linked health problems and sued. The first cases went badly for DuPont, which created the spin-off company Chemours in 2015, a move that plaintiffs feared was meant to insulate DuPont’s own bottom line from C-8 liabilities.

The evidence at those trials was damning for DuPont. The documents show a 1982 warning from a company medical director about the “great potential for current or future exposure of members of the local community from emissions” after the company’s own research showed workers were getting sick.

By 1984, DuPont was sending out workers to surreptitiously draw jugs of tap water from local gas stations and schools, confirming that C-8 was getting into people’s drinking water — but minutes from a corporate managers meeting that year show, the company concluded that none of the alternatives to C-8 were “economically attractive” and decided to keep using C-8.

Over a decade later, a 1995 DuPont internal document expressed concern “about the potential long term human health effects of these materials considering they all appear to have long biological half lives.”

With evidence like this, DuPont and Chemours lost the first C-8 cases that went to trial deal, with juries awarding three individual plaintiffs a total of over $20 million in 2015 and 2016, including $11 million in punitive damages. Two of the three verdicts remained under appeal, and the recently announced settlement will cover those cases as well.

Meanwhile, communities across the US have discovered C-8 in their own water supplies. Trace amounts of C-8 was found in 94 public drinking water systems, spanning 27 states and serving 6.5 million Americans, a 2015 report by Environmental Working Group concluded. The surfactant spreads not just through water, but by air too, and a peer-reviewed 2007 study by the Centers for Disease Control found that 98 percent of Americans over 12 years old carried detectable amounts of C-8 and related chemicals in their blood.

The chemical does not biodegrade, but instead builds up in peoples’ and animals’ bodies over time (a broad range of wildlife, from Arctic polar bears to dolphins in the Florida Keys, carry C-8 in their systems, researchers say).

“PFOA contaminates the tap water of 7 million Americans, pollutes the blood of virtually everyone and is found in the most remote parts of the planet,” says EWG’s Ken Cook. “We celebrate the fact that justice has been served for tens of thousands of people in the mid-Ohio Valley, but we can’t forget that PFOA and related nonstick compounds will continue to threaten our health for a long, long time.”

Eight major American chemical companies, including DuPont and 3M, which had supplied DuPont with C-8 for decades, agreed to phase out C-8 by 2015 in a voluntary deal with the EPA announced in 2006. But because it’s formed by one of the strongest bonds in organic chemistry, C-8 is expected to persist in the environment for millennia to come.

An Earth Island Journal investigation last year examined the shortcomings in American chemical regulations that allowed PFOA and similar chemicals to become so pervasive in the environment. “In many ways, C8 is a poster child for the failures of US toxic chemical law,” Bill Walker, an EWG researcher, told EIJ at the time. “Between 3M and DuPont you have a increasingly damning cover-up. And yet the law is so toothless that neither company was really concerned about being caught by the EPA.”

Attorneys for DuPont also celebrated the end to the Ohio Valley litigation. “We are pleased to have reached a mutually satisfactory resolution for all parties that brings this matter to a close,” Dan Turner, a DuPont spokesperson, told USA Today. “The settlement is not in any way an admission of liability or fault by DuPont or Chemours,” Chemours added in a statement.

Shares of both companies rose after the settlement agreement was announced, with Chemours stock rising 15 percent by the end of the day (February 13). DuPont’s $335 million share of the main settlement is dwarfed by the company’s overall $25 billion in net sales last year.

Plaintiff’s attorneys warned that their victories last week might be difficult to repeat, in part because future lawsuits won’t benefit from DuPont’s agreement not to dispute the results of the research they funded in the Ohio Valley, which meant that those specific 3,500 plaintiffs needed to prove less in court.

“PFOA is not going to be the new asbestos,” plaintiff’s attorney Mike Papantonio, who has been involved in both C-8 and asbestos litigation, told Chemical and Engineering News. “Just because you have PFOA in your blood doesn’t mean you have a ticket to win your case. You must be able to prove you have enough PFOA in your blood to cause injury.”