Do Non-Native Fish Have a Place in the Sacramento Delta?

Speeding down a channel of the Cache Slough, an appendage of the Sacramento-San Joaquin River Delta, biologist Matthew Young deftly navigates our small research boat, which is sitting rather low in the water. Dressed in construction worker orange waders and a jacket, his curly brown hair protruding from under this green knit hat, Young, a marine biologist and a Delta Stewardship Council science fellow, is full of excited energy, which is remarkable considering both that it’s 4 a.m., and he and his team of researchers have three 12-hour days of fish sampling in the Delta ahead of them. 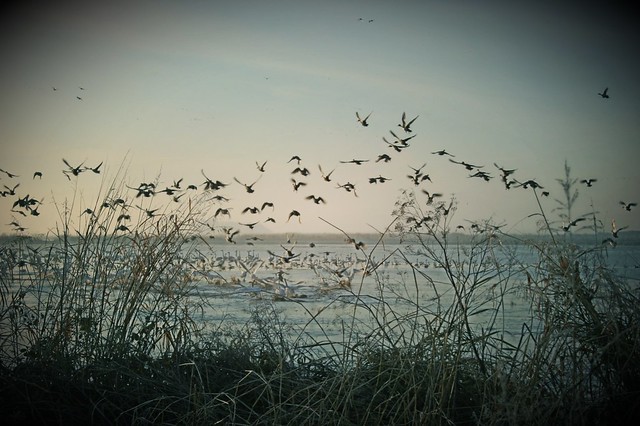 Photo by mhall209/FlickrThere’s some research to suggest that many non-native species are an intrinsic part of the delta today.

Young checks his list of locations and glances down at his GPS system. We coast up to the first spot, nudging the boat into the tule reed bank. Volunteer Nicole Aha lowers two sets of dangling metal wires that protrude at slight angles off the front of the boat. The electrofishing conductors have an uncanny resemblance to an octopus or those claw machines you see in supermarkets. Young flips the gas-powered generator on and signals to Aha to begin sending electricity into the water by pushing down on a pedal that completes the circuit, not enough to harm the fish, but just stun them instead.

Within a few seconds a few fish float to the top. Aha, wielding the 12-foot net, enthusiastically scoops them up. She passes them to me and I transfer the fish into an ice chest full of water. About a minute later, Young cuts the generator and we all eagerly peer into the ice chest. “Ooh, look a Mississippi silverside,” Aha says excitedly.

We record the species and size of the fish collected, descriptions of the habitat, the depth of the delta, and water temperature, among others. The whole process takes about 15 minutes and then Aha and I brace ourselves on the bow of the boat and Young jets off to our next location.

The purpose of Young’s research is to examine this part of the delta to determine how fish populations are doing. His hope is to determine if the decline of native species is due to non-native species or some other esoteric change in the delta, namely a change brought about by human activities and altering climate patterns.

This is especially important in light of the proposed $750 billion water bond, also known as Proposition 1, that Californians will vote on today (November 4). At least $1.5 billion of that money, most of which is earmarked for water supply infrastructure and public water system improvements, will be set aside for watershed restoration. But how to go about using those restoration projects is bound to be controversial.

Conservationists’ obsession with restoring a habitat to pre-human influence state, which includes thriving native species, may not be the best thing for the Sacramento Delta. This highly complicated ecosystem does not resemble the delta of 6,000 years past, and there’s some research to suggest that not only are many non-native species an intrinsic part of the delta today, some of them are actually filling the roles that native fish cannot, such as thriving in the delta’s warmer waters.

Mississippi silversides (Menidia audens) were introduced into the Sacramento Delta in the 1960s and since then have become abundant inhabitants. This small, fish with a distinctive shiny silver stripe running down its body, has been long been suspected of contributing to the decline of the delta smelt — an endangered fish species native to the delta.

The Mississippi silverside is a voracious predator of native fish larvae as well as the organisms that native fish like to eat, says Peter Moyle, a professor at University of California, Davis’s Wildlife Fish and Conservation Biology department who has been studying freshwater and estuarine fishes in California for more than 40 years.

The delta is home to more than 750 species of flora and fauna, including more than 250 non-native species. Researchers say that some non-native species, like the striped bass, which has been around since 1872 in the delta, have so fully integrated into the ecosystem that it wouldn’t make sense to try and remove it. That’s not to say that non-native species are not sometimes invasive and highly destructive. Two species of non-native clams, for instance, are literally sucking the most of the phytoplankton from the delta waters where they live, and the Brazilian waterweed forms dense beds that clog the channels of the delta.

“All major aquatic habitats in the delta and Suisan Bay have been affected by invasive species, which have altered food webs and habitat structure,” says the 2012 report “Aquatic Ecosystem Stressors in the Sacramento-San Joaquin Delta,” which was commissioned by the Public Policy Institute of California. (Moyle is one of the authors of the report.)

But here’s the thing: The delta has been undergoing massive changes from factors coming from all directions, not just non-native species. In that same report, the authors write that, apart from non-native species, there are four other stressors harming native fish populations, including contaminants being discharged into the water, fisheries management, the water management, and changes in the physical habitat. The report also lists climate change and changing ocean conditions as two other stressors, but acknowledges that these two cannot easily be mitigated.

Yet another report, titled “A Delta Transformed,” released by the San Francisco Estuary Institute last week, says “the Delta no longer functions as a delta, spreading river and bay water and sediments across wetlands, floodplains, and riparian forests.” It has become what Moyle calls a “novel ecosystem,” and much of the change is irreversible.

“All the non-native species are now also part of this ecosystem,” Moyle says. “Obviously we’re in a system that’s changing. Climate change is sort on top of everything else. A lot of these species would be in trouble [even]without that, because of the way we have managed the delta, but because it’s novel we have to think of new ways to manage it, ways that favor native fish.”

But attempts to keep the ecosystem healthy and stem the collapse of the delta — which is a key source of California’s water needs — have always been fraught with strife. About 70 percent of California relies on the delta for its water — from farmers in the Central Valley to metropolitan users in Southern California. Those interests, coupled with the complexity of the changes occurring in the delta, often stifle taking action.

“Additionally, any single action, even if deemed beneficial for the fish, is usually confronted by a stakeholder or interest group opposed to its realization, thus making collective actions even more difficult,” write the authors in the 2012 Public Policy Institute report. “Yet maintaining the status quo appears to be the least likely avenue to successfully managing the delta’s native biodiversity.”

Some scientists say that rather than spending money on restoration efforts right now (as would happen if voters pass Proposition 1), the focus should be on more research into the new delta ecosystem.

“In a perfect world people would say, ‘Let’s restore the delta, ’ but what it used to be was so much different than what we have today,” says Jacob Montgomery, a researcher for the UC Davis Center for Watershed Sciences, who works with Young in the Cache Slough. “It’s smaller and the land adjacent and how it is used has changed…. You have this semblance of organisms that haven’t existed here before, but also that haven’t lived together before. No one really knows what they’ll do and if we want to talk about restoration and native species … then how can we help without more knowledge, because their needs have also changed.”

The last run Young does is full of excitement and fish, native fish: All five species that come floating to the top are native to the delta. The sun has now risen fully, painting the delta in bright greens and browns. This particular part of the delta is one of the most ecologically diverse. It has what is perhaps some of the last intact riparian and old growth forest in the Sacramento Valley. Looking over the calm channel as birds chatter in the background, it’s hard to believe that the delta around us is continually undergoing ecological changes.

“There’s this perception that the delta is an unhealthy ecosystem,” Young says. “That’s flat out wrong. We just don’t have the ecosystem that we want, one that shows that humans aren’t having an impact.”