Disney’s South Pacific-set animated feature Moana — co-directed by Ron Clements and John Musker, co-creators of The Little Mermaid and Aladdin, with voice characterization by Dwayne “The Rock” Johnson and music co-written by Hamilton’s Lin-Manuel Miranda — was number one at US box offices during the Thanksgiving holiday weekend. After its world premiere at LA’s AFI Fest on November 14, The Hollywood Reporter noted, “Moana scored… with $81.1 million from 3,875 theaters,” while ABC News reported it “notched the third-largest three-day Thanksgiving opening of all time.” 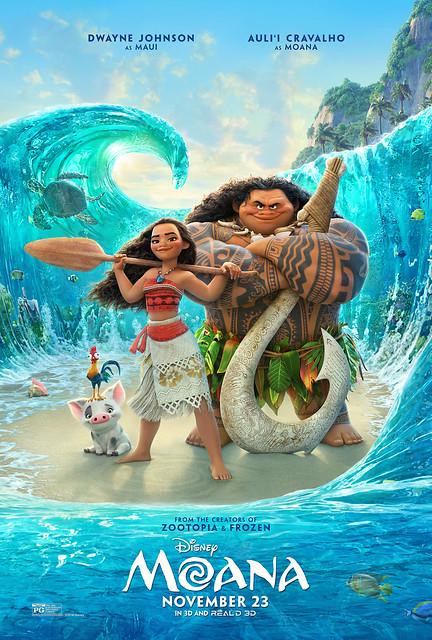 The optically opulent movie is about Moana (voiced by Hawaiian teenager Auli’i Cravalho), daughter of Motunui island’s Polynesian Chief Tui (New Zealand Maori actor Temuera Morrison, who starred in 1994’s Once Were Warriors). After the Pacific Islander learns about her voyaging heritage from Gramma Tala (Maori actress Rachel House of 2016’s Hunt for the Wilderpeople), Moana decides to embark on an Oceanic odyssey to save her endangered isle from environmental devastation. During her voyage she enlists the aid of the legendary demigod Maui (voiced by Johnson, who is part-Samoan), who reluctantly helps the young, feisty Moana as they cross the Pacific in a sailing canoe to fight the demonic force on a far away isle that is threatening Motunui (which can be translated as “big island”).

This is the basic plot of Disney’s sumptuously animated musical adventure, but what most reviewers have missed is that disguised in the medium of a feature-length colorful cartoon, Moana’s filmmakers have created a motion picture parable about climate change. And emerging while Native tribes take a stand at Standing Rock against fossil fuel development and oppression of indigenous peoples, Moana is also a movie metaphor about indigenous rights. (If Dakota Access Pipeline protesters are “water protectors,” however, in Moana the Pacific protects the title character — whose name can be translated as “ocean.”)

The entire raison d’etre for Moana’s mission is that an environmental disaster has befallen Motunui. The crops are failing, the coconuts have turned black, and the lagoon’s fish have been fished out. To restore ecological balance Moana must sail to the distant island of Te Fiti and return the “heart of Te Fiti,” a sculpted, jade-like precious gem-like stone that glows green (symbolizing Mother Nature) in order to defeat Te Kā, a fierce fiery creature threatening her home. Te Kā’s heat and flames represent global warming; Moana and Maui repeatedly proclaim they’re not only rescuing Motunui, but “saving the world.”

Disney’s creative team has rendered, within the animation format, an allegorical version of Pacific Islanders’ struggle against climate change, as depicted in documentaries such as Josh Fox’s How to Let Go and Love All the Things Climate Can’t Change. In that 2016 nonfiction film the Pacific Climate Warriors — including islanders from Polynesia, Micronesia, and Melanesia — form a blockade with a fleet of outrigger canoes to stop coal ships from leaving the port at Newcastle, Australia. Compelled by the fear that global warming-caused sea level rise will inundate the isles, their slogan is: “We are not drowning, We are fighting!”

Moana also expresses the revival of traditional Polynesian seafaring methods that was launched in the 1970s by the Hawaiian voyaging canoe Hokule’a. This movement proved that ancient Polynesians purposefully and scientifically sailed to and settled islands across the vast stretches of the Pacific by using the stars, ocean currents, winds, etc., to chart their courses. This systematic wayfinding technique gave the lie to the racist canard that Pacific Islanders were not intelligent enough to have crossed the ocean by design and had only discovered their far-flung islands randomly and by chance. The 1970s’ resurgence of traditional Oceanic voyaging contributed to a Pacific Renaissance of culture that inspired ethnic pride among colonized peoples at Hawaii, Tahiti and beyond, and Moana taps into this proud legacy.

Fox’s documentary also goes on location at Vanuatu and at Savaii, the big island of Samoa, the first major film to shoot there in 90 years, since Robert Flaherty made the classic silent film Moana of the South Seas. Starting with 1922’s Arctic Circle-set Nanook of the North about Inuits’ way of life, Flaherty pioneered a form of ethno-filmmaking of documentary-like films shot at remote locations. Moana of the South Seas, released in 1926, was his poetic follow-up to Nanook. Disney’s 2016 animated feature probably derived its name from Flaherty’s exquisite black and white masterpiece, although in it, Moana is actually a teenaged male. And instead of saving his island — let alone the planet — the Savaii villager’s goal is to undergo the painful traditional knee-to-navel tattooing of the “Fa’a Samoa” — the Samoan Way. Ninety years later, a cinematic highlight of Disney’s Moana are scenes in which Maui’s tattoos come to life on his body.

Some Polynesians have criticized the depiction of the ancient demigod of their pre-Christian religion, Maui, as obese. While it is true that Maui is portrayed as overweight in the film, Moana’s body type is a huge improvement over that of Disney’s other indigenous princess in 1995’s Pocahontas, where the young teenager was over-sexualized, illustrated as a voluptuous beauty, and given voice by Alaska-born Irene Bedard, an Inupiat Eskimo and French Canadian/Cree actress voted one of People magazine’s “50 Most Beautiful People.” The cartoon Pocahontas was reportedly modeled on Bedard, who was about twice her character’s age at the time. Despite the continued prevalence of South Seas celluloid stereotypes portraying Polynesian women as promiscuous, Moana — voiced by Cravalho when she was only 15 — is not sexualized in the film, and is depicted appropriately for a female character who is in early adolescence.

South Seas Cinema is a popular film genre dating back to 1898, and most of these movies set and shot in Oceania depict white characters as the protagonists, such as Errol Flynn, Clark Gable, Marlon Brando, and Mel Gibson portraying Fletcher Christian in various versions of the Bounty mutiny saga. On the other hand, all of Moana’s human characters are aboriginal islanders co-existing in harmony with nature (at least until the ecosystem is menaced). Motunui’s inhabitants live in pre-contact Polynesia before European explorers arrived, followed by colonizers, missionaries, and merchants. And like 2002’s Maori movie Whale Rider starring Keisha Castle-Hughes, with its spunky grrrrrrl power protagonist who confronts Maui and monsters alike, Moana also has an empowering feminist message.

The film’s relative authenticity and cultural sensitivity reflects the fact that the filmmakers traveled to the South Pacific and hired a team of Native cultural consultants to advise on the production. One advisor listed in Moana’s closing credits is Dr. Vilsoni Hereniko, a University of Hawaii professor, playwright, and moviemaker born on the Polynesian islet of Rotuma in Fiji. Samoan-born songwriter Opetaia Foa’i — whose father is from Tokelau and mother from Tuvalu — co-created Moana’s music with Disney musical veteran Mark Mancina. All of the key cast members giving voice to the animated human characters are Polynesian, though the dramatis personae themselves are not identified as coming from any particular island group. And according to the L.A. Times, the PG-rated, one hour and fifty-three minute Moana “will be the first Disney movie ever translated and re-recorded in Tahitian.”

Like Aesop’s Fables, Moana’s film fable has “a moral to the story.” With its rare depiction of an intact, untouched Polynesian culture, Moana shows how the issues of native lifestyles and climate change are inextricably bound up with one another; how indigenous peoples are among those most impacted by global warming. Moana and Maui’s quest is to restore ecological balance to preserve traditional culture. Framed in the medium of computer-generated animation with some hand-drawn artwork, Moana presents an environmental, indigenous vision via mass entertainment for children of all ages.