The annual Dungeness crab season is already underway yet harbors all along the West Coast of North America are ghost towns during a time when they are expected to be chaotic with activity. “Normally on the season opener our parking lot looks like an entire city, with RVs and cars and people, and the harbor is absolutely bustling with activity,” says Tom Mattusch, a charter boat captain based in San Mateo County, California. “If I showed you a picture of the parking lot now, it’s just commercial equipment stacked up. They haven’t even loaded the boats yet.” 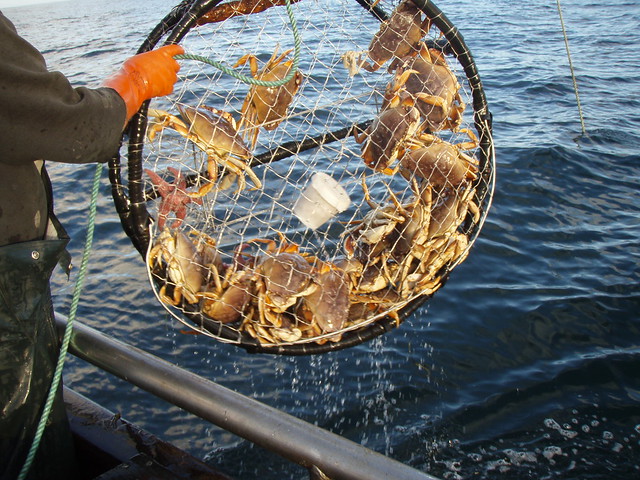 Photo by California Department of Fish and WildlifeThe commercial crab seasons in California, Oregon, and Washington have been indefinitely postponed.

The reason? Dungeness crab samples taken this year by officials at various locations along the coast contained domoic acid, a dangerous neurotoxin, prompting the indefinite postponement of the commercial crab seasons in California, Oregon, and Washington. California’s season was slated to begin November 15, while Oregon and Washington were originally expected to open their seasons December 1. Ingestion of domoic acid can cause loss of short-term memory, seizures, or even death, so health officials are not taking chances when it comes to this biotoxin.

The organism responsible for wreaking havoc on the crab industry is a large bloom of an algae species known as Pseudo-nitzschia, which produces the domoic acid. Linked to unusually warm ocean temperatures off the West Coast, this year’s bloom stretched from Alaska to California, making it the largest and most persistent occurrence of Pseudo-nitzschia ever recorded.

“The unique thing this year is the geographic extent and duration of the bloom,” research biologist Kathi Lefebvre explains. “Usually, we have more regional blooms that last up to a few weeks. This one is along the entire West Coast of the US, and it’s lasted longer than we’ve ever seen before.” Even though Lefebvre has studied harmful algal blooms for 17 years, most recently with the National Oceanic and Atmospheric Administration’s Northwest Fisheries Science Center, she was surprised by the magnitude of this year’s bloom.

The bloom came as an even greater shock to the commercial and private fishermen on the West Coast, where millions of dollars are at stake in the seafood industry. Mattusch, who also serves as president of San Mateo County’s harbor commission, has already lost over $20,000 from the delay. (The Dungeness crab industry on the West Coast usually brings in about $200 million a year.) Despite the financial loss, he tries to remain positive, pointing out, “the domoic acid does not kill crab, so if you think about it, we’re building the stock right now.” Though domoic acid does not appear to kill crabs, the toxin does have a dramatic impact on other sea life, especially sea lions, other marine mammals, and seabirds.

Crabs, clams, anchovies, and other fish accumulate domoic acid in their bodies without measurable harm when they feed during Pseudo-nitzschia blooms, but mammals like sea lions are poisoned when they eat the fish that has accumulated the toxin. Domoic acid is a neurotoxin and at high levels it makes marine mammals and birds lethargic and disoriented, and sometimes have seizures that may result in death. In tests performed on dead or dying wildlife found during this bloom, NOAA’s Wildlife Algal Toxin Research and Response Network (WARRN-West) has so far measured detectable levels of domoic acid in 36 marine mammals and three seabirds spanning the entire US west coast from Southern California to Northern Washington.

Some of these animals were observed having seizures. This is not unusual for California as many sea lions are poisoned by domoic acid each year in that region and this has been happening for the last 17 years. However, this is the first year that high levels of domoic acid and seizures have been documented in a marine mammal as far north as Washington. What this means is that the toxin is present in the marine food web in an unprecedented geographic extent. “We’ve never seen a seizing sea lion this far north until this year. It’s really scary thinking about marine mammal health,” Lefebvre says. “In terms of human health, we’re lucky, because we have great seafood monitoring systems in place. There’s a huge economic impact, but people are unlikely to get sick”.

While fishermen hope for the return of cold water, scientists warn that the warm water years may become the new normal as climate change raises ocean temperatures throughout the world.

This year’s bloom in particular is linked to an incredibly persistent patch of warm water off the West Coast, referred to by scientists as “the blob.” Extending at least 1,000 miles from the coast of Mexico to waters off the Alaskan shore, the water in the blob measures about 2 degrees Celsius higher than historical temperatures. Attributed to a high pressure ridge off the West Coast, it is uncertain if the blob was caused by climate change, but scientists expect climate change to make events like the blob more common.

Researchers are currently looking for ways to better forecast future domoic acid events, especially as warming waters make them increasingly common. The Northwest Fisheries Science Center has instruments in the ocean to map harmful blooms and gather as much data as possible about them. NOAA, along with University of California, Santa Cruz, is trying to use the data to create a predictive “Harmful Algal Bloom” model. The forecaster uses circulation models, satellite data, and complex statistical models to predict Pseudo-nitzschia blooms within one to three days. As for any longer-term projections of domoic acid events, Lefebvre admits, “It’s a work in progress to figure out where, why, and how the blooms occur.”

While scientists cannot directly point to climate change as the cause of this bloom, they are confident that “changing the environment [through human-induced climate change] is absolutely going to disrupt the marine ecosystem in a big way,” Lefebvre says.

The domoic acid devastation unfolding along the Pacific Coast highlights the dangers of ignoring impacts of climate change until the problem hits the economy. Given that warm water years are becoming more frequent, the seafood industry may need to do more than hope for cold water to stay afloat.