Deep Undercover: Police Officer in UK Fathered a Child with an Activist as Part of an Investigation

What are the limits — if any — to undercover policing? At what point is a moral, ethical, or legal threshold crossed when an undercover operative insinuates himself into a targeted group or the lives of its members?

Last Thursday British media reported that the UK’s Metropolitan Police would pay £425,000 (about $686,000) in a settlement with a woman, known only as Jacqui, who was conned by a man who fathered her first child, said that he loved her, and then one day disappeared. She knew him as Bob Robinson. His real name, as she would learn 25 years later, was Bob Lambert. He was an operative with the Special Demonstration Squad (SDS), a special unit within the British police that infiltrated a host of environmentalist groups to gather intelligence. In several cases the operatives, almost always men, established long-term intimate relationships with women in order to gain access to the world of underground animal rights or environmental activists. 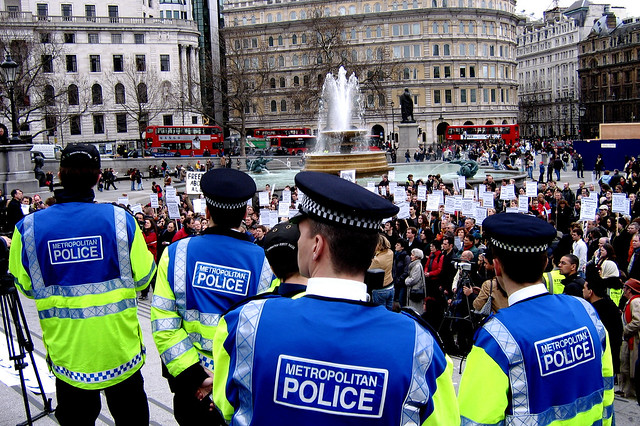 Photo by CGP GreyMetropolitan police officer Bob Lambert’s mission was to work his way into the “intensely furtive, hard-core wing of the animal rights movement.

Jacqui’s was 22 when she first met Lambert. He was more than ten years older than her, and had already been a member of the Metropolitan police for several years. He went undercover in 1983 not long before he met Jacqui. As Rob Evans and Paul Lewis explain in their book Undercover, Lambert’s mission was to work his way into the “intensely furtive, hard-core wing of the animal rights movement: the Animal Liberation Front.” Having a girlfriend who was already trusted and well connected within activist circles was one of the easiest ways to become a “deep swimmer,” a phrase used by members of the SDS to describe spies who completely immersed themselves in the groups they were monitoring. In addition to Jacqui, Lambert is known to have had romantic relationships with three other women during his career as an undercover operative. Seven other women have also filed charges against the Metropolitan police.

The revelation that she shared her life with a man she did not really know has wrecked Jacqui’s life. The Guardian reports: “The woman has been receiving psychiatric treatment and has contemplated suicide since she read a newspaper in 2012 and found out the true identity of the man who had fathered her son before abandoning her and the child 24 years previously.”

The extent to which such tactics were condoned is unclear. The police have denied that there was ever any formal policy authorizing such behavior, but the history of the SDS remains rather murky. It took the agency years to even acknowledge that Lambert had been a mole; only when it became publicly untenable to continue the denials did the agency move beyond the pro forma response of neither confirming nor denying his role. But clearly there was an informal culture of using relationships with women to gain access to activist circles. An internal police review, known as Operation Herne, found that, “There was informal tacit authority regarding sexual relationships and guidance was offered for officers faced with the prospect of a sexual relationship.” Former SDS officer Peter Francis put it more plainly when he told the BBC that sex was “used by almost everybody who was serving in that unit.”

To what end? To gain access, of course. In the process of destroying the lives of women like Jacqui, SDS agents may have committed other crimes as well. Lambert in particular has long been suspected of taking part in a bombing of a department store in 1987. Caroline Lucas, an MP for the Green Party, testified before parliament and alleged that Lambert was one of three individuals who took part in the attack. The other two spent several years in jail. Lucas also called for “a far-reaching public inquiry into police infiltrators and informers.”

But last week’s settlement may have the opposite effect. It heads off a potentially embarrassing lawsuit and essentially puts a lid on the case. As Jacqui told the BBC: “The amount of money [in the settlement] shows there is a cover-up.” Indeed. Eveline Lubbers, the author of Secret Manoeuvres in the Dark, a history of corporate and police spying in Europe, says the settlement is yet another way for the police to “evade legal accountability.” She notes that none of the police officers or their superiors, who were likely aware of the rampant sexual misconduct, have been prosecuted. “The money means that police abuse of power is not going to court,” she wrote to me in an email over the weekend.

A full accounting of the SDS’s activities throughout the 80s and 90s would have to include an investigation into the department’s use of agents provocateur and incitement of violence, its sharing of intelligence with the private sector, and its role in recruiting activists. Lambert’s story is sensational, but it is only one of many. By the 1990s, according to a Special Branch officer quoted by Evans and Lewis, there were more than 100 undercover officers working the ranks of the animal rights movement.

In the post-9/11 world there’s little question that undercover policing is alive and well. Look no further than the streets of New York or Detroit. Environmental groups and activists, as we’ve documented here at Earth Island Journal, remain targets of an ever-expanding national security state. Last year undercover officers infiltrated a tar sands resistance training camp in Oklahoma. The FBI, Department of Homeland Security, and state and local police routinely share information with the oil and gas industry with little or no public oversight.

Unlike Lambert, though, the stories of most deep swimmers never come to light. And the moral, ethical, and legal questions raised by their conduct are often obscured by the secretive nature of the work itself. When it comes to undercover policing, the rules of the game are almost always made behind closed doors. As Lubbers points out, it’s about more than just sexual misconduct.

“It’s about disruption of political dissent,” she says. “We need to know the extent of the undercover activities. And we need an end to it.”