Could Worms and Bacteria Offer a Solution to Plastic Pollution?

Each year, the world produces 300 million tons of plastic — an incredibly resilient synthetic product that pollutes every corner of the globe. Plastics are regularly ingested by wildlife on land and at sea, and eventually end up in the food on our plates. 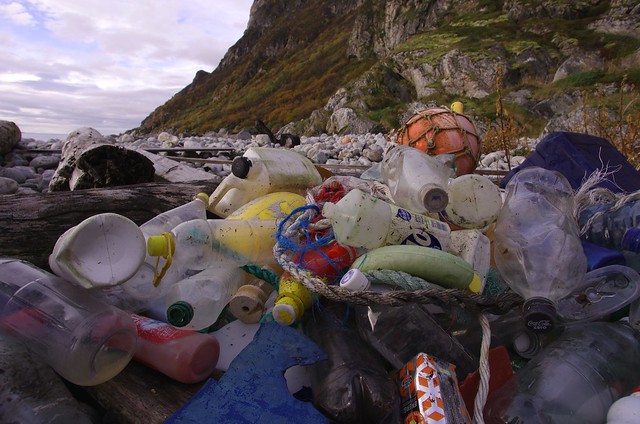 Photo by Bo Eide Hard-to-break-down plastic waste poses threats to wildlife and humans alike. Scientists, however, think wax worms may hold some clues as to how to degrade this troubling type of trash.

In 2012, Federica Bertocchini, a developmental biologist at Spain’s Institute of Biomedicine and Biotechnology of Cantabria, accidentally uncovered some wax worms while managing her beehives. Wax worms are the larvae of Galleria Mellonella, or the greater wax moth. They are commonly found in beehives, where the moth lays her eggs and the larvae feed on the wax produced by the bees — hence, the caterpillar’s common name.

Bertocchini cleaned out her hives and placed the wax worms in a plastic bag, setting them aside for disposal. But when she returned to the bag later, the caterpillars had eaten their way out, creating multiple holes.

In order to make sure the wax worms were not just chewing holes in the bag but were actually digesting the plastic, Bertocchini designed a simple experiment: She mashed up the larvae and applied the resulting paste to polyethylene plastic bags. This would test whether or not the enzymes produced in the caterpillars’ stomachs, or possibly the bacteria living within and on their bodies, could truly break down the plastic. After half a day, approximately 13 percent of the plastic had disappeared.

Like plastic, wax is a polymer consisting of a complex string of carbon atoms. “Since they eat wax,” Bertochhini told National Geographic, “they may have evolved a molecule to break it down, and that molecule might also work on plastic.”

To explore her findings further, Bertocchini teamed up with biochemists Paolo Bombelli and Christopher Howe at the University of Cambridge to analyze the chemical composition of plastic as it reacted to wax worm paste. More specifically, the researchers used spectroscopy to look at how the polyethylene absorbed or reflected infrared radiation during the reaction. This analysis showed that some of the plastic was converted into ethylene glycol — a sign that it was being genuinely degraded.

“It’s extremely, extremely exciting, because breaking down plastic has proved so challenging,” Bombelli told The Telegraph. When his team set the wax worms on the polyethylene plastic, they found that each caterpillar created an average of 2.2 holes per hour. Overnight, 100 wax worms degraded 92 milligrams of a plastic shopping bag.

Notably, these larvae are able to degrade plastic in weeks or months, whereas plastics can persist for decades in nature without decay. Polyethylene, comprising the world’s most common plastics, requires 100 to 400 years to degrade in landfills. Polyethylene and polypropylene together represent about 92 percent of global plastic production.

Galleria Mellonella is not the only species capable of eating plastic; meal moths, another type of wax worm, can also degrade polyethylene, as can some species of fungi and bacteria. Last year, a Japanese research team identified a previously unknown bacterium that can degrade polyethylene terephthalate — a form of polyester. And just last month, scientists at the US Department of Energy’s National Renewable Energy Laboratory and at the University of Portsmouth in the UK built on this discovery. In the course of studying an enzyme found in that bacteria, they unintentionally created a mutant enzyme that can break down plastic even more quickly, within just a few days.

Still, Bertocchini and her colleagues found that the wax worms inhabiting her beehive could eat their way through notoriously tough polyethylene in just a few hours.

“The caterpillar produces something that breaks the chemical bond, perhaps in its salivary glands or a symbiotic bacteria in its gut,” explained Bombelli on the University of Cambridge website. “If a single enzyme is responsible for this chemical process, its reproduction on a large scale using biotechnological methods should be achievable. This discovery could be an important tool for helping to get rid of the polyethylene plastic waste accumulated in landfill sites and oceans.”

In 2017, another research team contested these findings, arguing that the worms might just be “milling” the plastic and excreting it chemically unchanged. Still, Bombelli told Earth Island Journal by email: “Our attention is now focused on the discovery and characterization of the molecular mechanism on which the process of biodegradation is occurring. By doing that we need to pay care to the physiology and the life-cycle of the waxworm as this could play a key role in this process.”

Wax worms and bacteria might help reduce the overwhelming plastic pollution fouling our world, but some say the problem must be confronted at the source. To marine biologist Tracy Mincer of Woods Hole Oceanographic Institute in Massachusetts, solutions to plastic pollution need to focus on producing less and recycling more. “Polyethylene is a high-quality resin that can be up-cycled in many ways and can fetch up to $500 per ton,” he said to National Geographic. Indeed, there are many new and innovative uses for recycled plastic, like creating fleeces and houses out of plastic bottles.

We also need to think about reducing our use of plastic in everyday life — for instance, by bringing reusable canvas bags to the market and buying food wholesale by filling our own containers rather than consuming over-packaged goods. And today, there are a growing number of biobased or biodegradable alternatives to synthetic plastics, including products created from potatoes, sugarcane, and corn.