Can the Campania countryside survive the damage wreaked upon it by decades of illicit trash dumping?
Daniel J. Newcomer

In Naples, a seaside metropolis of three million in the shadow of Mt. Vesuvius, the city’s public services sometimes “forgets” to gather the trash from city dumpsters. A week passes and the waste overflows from the sides of dumpsters. Two weeks pass, and the old and weak cannot launch their trash bags to reach the height of the odorous mountains. The dumpster, sidewalk, and half the street soon vanish.

Finally, a month passes and the people, despaired by sight and smell, set the trash mountain ablaze. My fiancée, a former medical student from Sicily, races around the house slamming windows and cursing, trying to keep out the carcinogenic smoke. 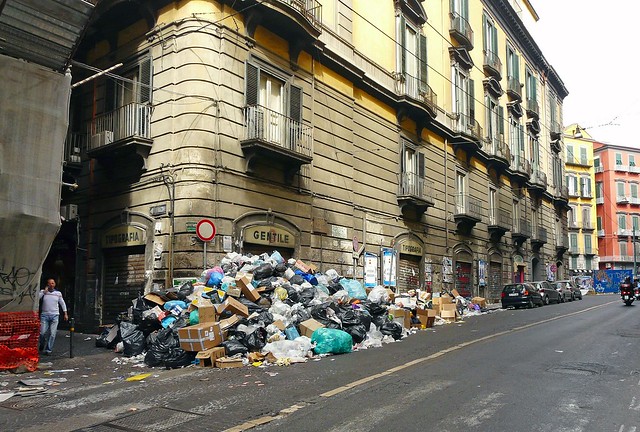 Photo by mksfca/flickrNaples has a garbage collection problem. In the past 20 years, Naples and the Campania countryside have attracted new nicknames: “Land of Poison,” “Triangle of Death,” “Land of Fires.”

In the 1600s, when Naples was experiencing its Golden Age, Goethe described the area as the “most fertile plain in the world.” French writer Stendhal once cried, “Paris and Naples, the two true capitals!” Naples was, and some argue still is, the city of art, love, and philosophy — a city that wears her pleasures in the streets.

In the past 20 years, however, Naples and the Campania countryside have attracted new nicknames: “Land of Poison,” “Triangle of Death,” “Land of Fires.” A land once fertile and revered has devolved into a place where toxic waste seeps into water sources; where black pillars of smoke from burning garbage dumps have exposed local populations to increased risk of lung carcinoma. Birth defects here are 80 percent above European averages, and researchers have found that breast cancer rates in the region were 47 percent above the national average.

Stories abound of rampant political corruption, the mafia’s involvement in the garbage business, and tens of billions of dollars of dirty money changing hands. There are even whispers of nuclear sludge being trucked in from Germany and dumped in makeshift landfills under buffalo grazing fields.

The cause of Campania region’s environmental damage and public health crisis is so disperse that it’s difficult to point fingers. There are the Italian politicians who, during northern Italy’s industrial boom in the 1980s and ’90s, looked the other way while internationally known carcinogenic chemicals were used in local factories. At the same time, the Campania mafia, known as the Camorra, worked with politicians, police, and industrialists to dump toxic waste in illegal landfills outside Naples. Then, the industrialists appeased their economic gluttony by seeking enormously cheaper waste removal contracts with the criminal Camorra clans.

The Italian environmental protection association, Legambiente, claimed in its 2014 Ecomafia Report, that an estimated 11.6 million tons of waste was buried illegally in the region since the 1990s, all of which was coming from at least 440 businesses. These figures were “just the tip of the iceberg,” Enrico Fontana, Legambiente spokesperson and the journalist who coined the term “ecomafia,” stated in an interview with The Independent.

Before considering costs, it’s important to look at the value of illegal waste dumping. Legambiente estimates that among the Camorra in Campania, the ‘Ndrangheta in Calabria, the Sacra Corona Unita in Apulia, and the Cosa Nostra in Sicily, the business of illegal waste dumping adds up to $16 billion USD a year. To put that number in perspective, McDonalds netted $4.76 billion USD in 2014.

The result of the illegal industrial dumping, hidden underneath various sites in Campania, is dioxin, tetrachloride, lead, arsenic, PCBs, asbestos, industrial sludge, toxic solvents, and other chemicals seeping into the soil and ground water. In 2008, samples of buffalo milk produced in Campania featured traces of dioxin, leading to export bans in Japan and South Korea. In March 2014, Italy’s ministry of agriculture prohibited the commercial sale of buffalo mozzarella, olive oil, and wine produced in a 13.3-square-mile area between Naples, Castera, and Castel Volturno.

According to Antonio Marfella of the Italian Cancer Research Institute in Naples, the waste is associated with a 47-percent increase in tumors among men who live around Naples. Campania now leads the rest of Italy in cases of severe autism and infertility. A study conducted by the Pascale Institute in Naples concluded that 9,960 people have died in the region since 2005 from cancer and pulmonary disease directly related to toxic waste, and the increase in cancer in the small town of Acerra has risen by more than 30 percent. In addition, towns like Casapesenna, Casal di Principe, Castel Volturno, and several others have shown a 40 percent increase in cancer among men and a 47 percent rise in its occurrence in women.

A study conducted by the Pascale Institute in Naples concluded that 9,960 people have died in the region since 2005 from cancer and pulmonary disease directly related to toxic waste.

However, the connection between toxic waste and rising cancer rates in the area remains contentious. In a 2015 review published in the International Journal of Environmental Research and Public Health, researchers from the Department of Public Health at “Federico II” University in Naples concluded, “Further studies are needed to better define waste related health effects, since updated data are still far from being conclusive.”

The first widespread revelation of the mafia’s role in the illegal waste racket was a 1997 state testimony given by pentito Carmine Schiavone, the notorious ex-treasurer of the Casalesi clan.

Before an investigative committee in Rome, Schiavone struck at the heart of industrial and political corruption that extended from Milan to Naples. Because of ongoing investigations and corruption, the testimony’s sheer breadth led the Italian parliament to withhold Schiavone’s testimony for nearly 16 years. Mounting public pressure over the cancer rates and the public health crisis in Campania convinced the state to declassify the testimony in October 2013.

While the Italian authorities were holding on to Schiavone’s testimony, a 2004 report in the British medical journal The Lancet Oncology, gathered in part by cardiologist Dr. Alfredo Mazza, depicted the Campania as a poisoned environment with over 5,000 illegal waste sites and 28 breaches of European Union environmental laws. And from 2008 to 2011, a $30 million study by the US Navy and Marine Corps Health Center concluded that US military and civilian staff living at US military bases at the Gricignano Support Site and Capodicino for more than 3.2 years would be exposed to serious health risks.

Legambiente also says that the government knew the extent of the problem and did nothing. The German news magazine, De Spiegel, named four high-profile players who may have overlooked the problem, including former president Giorgio Napolitano (who was a prominent force behind the Schiavone testimony being held back), Alessandro Panso, head of the Italian state police, Nicola Cavaliere, head of Italy’s domestic intelligence service, and Gennaro Capoluongo, head of Italy’s Interpol.

“There’s a 2014 decree full of descriptions of what to do. But it’s already late and still in the investigation stage,” Michele Buonomo, president of Legambiente Campania, told Earth Island Journal, in reference to the state’s current attempts to rectify the damaged land. The decree was, in fact, a leading topic in last year’s Common Forum on Contaminated Land in the European Union. According to it, there are three main provisions for land reclamation in Campania, including identifying hazardous lands where agriculture and farming is to be forbidden, health screenings for the area’s two million inhabitants, and systemic control of fires in the region.

So far, there’s been quite a bit of progress in identifying toxic areas. The state has been successful in discovering several hidden landfills in the region. Italian Forestry Police recently uncovered the largest toxic dumping site ever discovered in Europe. The site, which includes over 60 acres of French industrial waste and containers with solvents, was located in June this year outside of Calvi Rosrota, north of Naples.

Other measures include using military force to combat the mafia in Campania and stronger legislation regarding eco-crimes. In March this year, the Senate in Rome approved a bill that hopes to make environmental crimes such as trafficking in and dumping toxic waste culpable felonies. There is also talk of using technology, such as mobile apps, that would allow citizens to tip authorities about eco-criminals.

“It is also important to isolate these landfills and provide citizens with security over the region’s products,” Buonomo said. “They [the Italian government] are doing something but not enough.” Buonomo believes that this problem wasn’t solely “a Naples problem, or even an Italian problem.” According to him, “It’s a global problem, and the Land of Fires serves as a symbol of the larger waste issue and eco-criminality the planet must face.”

Even with this information, my fiancée and I do as the Italians do — we eat, live, and love. Yes, we shut the windows at the smell the burning trash, we drink from water bottles and filter our shower water. Mostly, school and work, friends and family, the joys and obligations of the day supersede invisible concerns.

But for some, such as a friend of ours from Portici who asked not to be named, the waste crisis manifested when her mother contracted intestinal cancer. The mother has since died, and connecting the tragedy to the cause remains buried in speculation. Perhaps the cancer would have come regardless of the environment. But people of this region shouldn’t have to wonder if such tragedies came at the heels of injustice and crime.