May is late autumn in the southern hemisphere, and as we creep closer to winter, Canberra, Australia’s capital city, is carrying out its annual, and controversial, kangaroo cull. With some pride, the city is known as the “bush capital” due to its wide corridors of native grasslands and gumtree and casurina tree woodlands, and an abundance of accompanying wildlife. As the city sprawls, it is displacing native habitats. At the same time, suburban lawns and sports ovals offer appealing alternative spaces for some animals, particularly our largest and most mobile grazing species, the eastern grey kangaroo. Due in part to the near disappearance of the kangaroo’s main natural predator, the dingo, or wild dog, and declines in traditional Indigenous hunting, kangaroo populations have exploded over recent decades. 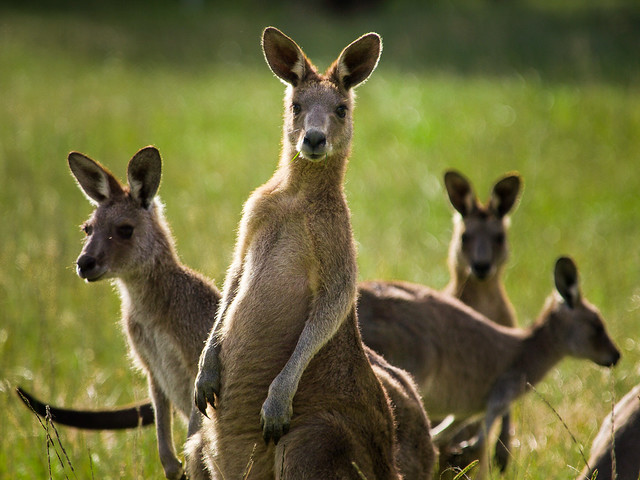 Photo by Dieter BethkeThe annual killing by shooting of kangaroos is a slaughter of a creature intricately associated with Australia.

The annual killing by shooting of kangaroos is a slaughter of a creature intricately associated with Australia. The kangaroo is immortalized on our coat of arms, the logo of our world-renowned airline, Qantas, the star of the stilted but global hit ‘60s TV series “Skippy,” not to mention a major a tourist drawcard.

Yet the Canberra government says the adaptable eastern grey also poses hazards as its numbers grow. While the government has been grappling with appropriate, effective and socially-acceptable responses to the kangaroos since the 1990s, in 2014, they categorized the eastern grey kangaroo as a “controlled native species,” paving the way for culls to take place and becoming the first Australian government to publish a government policy on the marsupials and conservation. In May 2017, the Australian Capital Territory (ACT) Government issued an updated management plan for the species. This plan identified three areas of concern regarding the proliferation of eastern grey kangaroos in the region: environmental, economic, and social. The plan was finalized following community consultations which occurred earlier in the year.

The environmental concerns relate to claims of the overgrazing of native grasses by kangaroos, leading to further degradation of the habitat, and harm to threatened species like grassy woodland bird species, lizards, and invertebrates. This includes birds that nest or rely on grassy ground cover for food and insects, such as the hooded robin and brown tree creeper, and reptilian grassland specialists such as the earless dragon, striped legless lizard, and pink tailed worm lizard. Threatened invertebrates include grassland specialists such as the golden sun moth and Perunga grasshopper. The grasses themselves and other small plant species that are difficult to locate and measure such as native orchids, lilies and daisies, are also under stress.

The economic and social concerns relate to rural business stress — particularly on rural farmlands overgrazed by kangaroos — as well as community concerns over the best ways to manage the kangaroo population. There’s also the cost of road accidents and the distress caused to drivers — an Australian insurance company estimated that 90 percent of all road accidents involving animals across the ACT and Canberra region were caused by vehicles colliding with kangaroos. In winter, the collision rate increases, as days are shorter and visibility is decreased. Across the capital, roadsides are scattered with carcasses of large and small eastern greys until they are collected and disposed of.

The local ACT government has initiated what it considers to be a responsible response to the kangaroo issue. While their numbers are said to fluctuate considerably in Canberra and adjacent areas, the regional eastern grey population was said to be around 30,000 in 2017. Over 2,500 kangaroos were killed in the 2017 cull, an increase over the 2016 cull in which 2,000 were killed, including over 500 pouch young known as joeys. The animals are culled on reserve land around the city. (Canberra isn’t the only place where kangaroos are killed — some 1.6 million kangaroos were culled across Australia in 2015.)

The cull is divisive.

“No-one in government likes doing this, but as responsible land managers I think the community understands that we have a job to do here to get the ecological balance right,” then ACT government Territories Minister and Green Party member Shane Rattenbury said of the culls in 2015 as reported in the local newspaper, The Canberra Times. “I think it is interesting that people who claim to be animal welfare activists are prepared to go and support just one species at the expense of other species such as birds and lizards, when in fact the whole ecosystem is under threat.”

The ACT Conservation Council, a community environmental protection group, supports the cull. As explain in its policy stance: “In the absence of more effective existing alternatives, the Conservation Council recognises the need for culling in circumstances of demonstrated over-grazing and the need to protect endangered ecological communities and nature reserves that support a range of species.”

Other wildlife and animal rights groups oppose the cull, citing lack of evidence that it actually protects the environment, concern that kangaroo populations are over-estimated, and objections over how the kangaroos are killed.

The Australian branch of the Royal Society for the Prevention of Cruelty against Animals (RSPCA) and local Animal Defenders Office are both against the cull. The RSPCA calls for the Federal and State and Territory governments to review their kangaroo management practices. The organization questions the necessity of the cull to protect other species, and is particularly concerned about the cruelty of how the kangaroos are shot, especially females with joeys in their pouch. These pouch young are supposed to be clubbed in the head or decapitated under the government management plan, but are often either shot, predated upon, or die slowly from hunger or thirst.

Animal Liberation ACT calls the cull by shooting “barbaric,” and questions the ethics of killing healthy animals including their young.

Independent scientists also question the validity of the claim that excess numbers of eastern greys are causing habitat and species loss. In an interview The Canberra Times in 2016, Dr. Daniel Ramp, a conservation biologist, stated “There are populations of legless lizards doing perfectly well in areas where there are lots of kangaroos in Canberra. What we have is a reserve management issue, not a kangaroo management issue.” Reserve management in this context relates to better management of the abundant wide swathes of government land and all the species that inhabit them.

Others have stated that the kangaroo’s migration patterns, as well as factors that may be leading eastern greys to breed younger and faster, are not being studied or considered within the government plan.

In efforts to reach a more humane and socially acceptable management of kangaroos, a contraceptive for the eastern grey, called GonaCon, was developed by the federal government’s Commonwealth Scientific and Industrial Research Organization. In conducting trials and refining delivery protocols for the contraceptive, the ACT government spent over AUD 600,000 (around $500,000 US). The contraceptive is delivered by injection, and is supposed to keep females infertile for up to six years.

Delivering the contraceptive is notoriously trickly, however, as kangaroos are agile and fast (they can bound at up to 60 kilometers, or just under 40 miles, an hour). In a trial, around 500 female eastern greys were injected with the contraceptive in 2017. Some hoped the cull would be cancelled as a result, but it proceeded.

If, as proponents of the cull claim, the numbers of eastern greys are increasing annually, despite repeated culls, surely this indicates that current measures are not working. Yet neither are the attempts to get widespread and effective use of the contraceptive. Given that there still is nowhere near agreement on whether or not the kangaroos are adversely affecting the biodiversity of the region, perhaps what’s needed is more research and some new ideas for a more humane management program.