Hana Raza is determined to overcome conflict- and gender-related obstacles to establish a network of protected areas for the endangered big cats.
Veronika Perková

After the Iran–Iraq War (1980–1988), which severely degraded Iraqi nature, Persian leopards (Panthera pardus tulliana) were thought to be locally extinct. The war left the country with mountains covered with millions of landmines and many species with vastly depleted numbers. So nobody expected this endangered species — the world’s largest leopard — to remain in the Zagros Mountains of Iraqi Kurdistan. 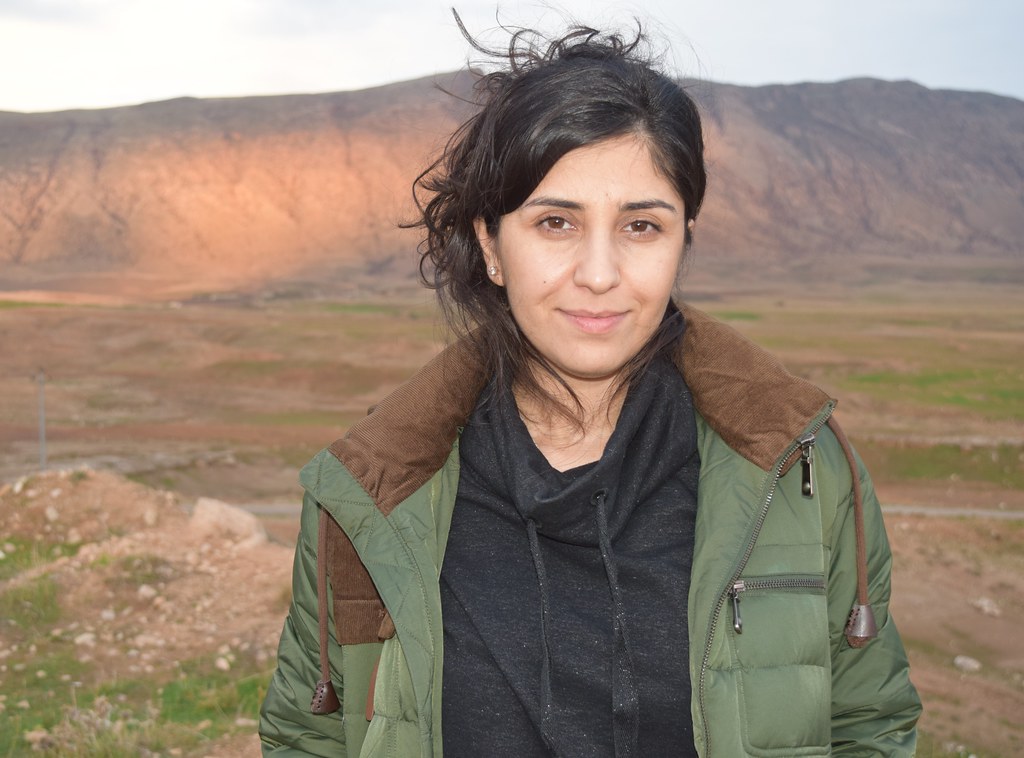 Hana Raza started searching for leopards in Iraqi Kurdistan back in 2009. She captured her first image of a leopard on a camera trap in 2011. Photo by Nariman Ahmad.

Nobody, except Hana Raza, a Kurdish wildlife conservationist who started to search for leopards in 2009 after joining the nonprofit Nature Iraq and learning from a colleague that if wild goats (Capra aegagrus aegagrus) inhabit a certain area, there is a good chance that leopards live there as well. She knew that wild goats — which are Persian leopard’s main prey species — were common in the Qara Dagh area of the Kurdistan region in northern Iraq. So, even though locals had last seen leopards there in the mid-1980s, she asked the forest police to take her to a trail used by large animals so she could set a camera trap.

In 2011, she set her first camera trap, and later that year she captured her first image of a leopard. The next images came in 2012, 2016, and 2017. By early 2021, she had identified six different leopards in Kurdistan through camera trap photos, though she has yet to set her eyes on one of the big cats. The exact size of the population is unknown, but based on Raza’s field experience and data collection, she estimates that it is between 20 and 25 individuals. A viable population should have at least 50 individuals, an equal male-female ratio, and reproductive success of female leopards. Knowing the critical role the cats play in the local ecosystem, Raza started working to establish a network of protected areas to help fortify their numbers.

“The leopard is crucial to conserve because, as an apex predator, it is at the top of the food chain, and the food chain works like a game of domino: if one piece is removed, the entire system falls,” says Raza. “These efforts aren’t just for the leopard’s protection. The leopard serves as an umbrella species under which vast essential ecosystems and endangered animals and plants are protected.”

Worldwide there are roughly 900 to 1,300 Persian leopards living in the wild, primarily in Iran, Turkmenistan, the Caucasus, Southern Russia, Iraq, Afghanistan, and Turkey. Due to the ever lowering numbers, the leopard was listed as Endangered on the IUCN Red List in 2016.

In Iraq, the main threats to Persian leopards are poaching, prey depletion, and habitat loss. Between 1999 and 2018, almost half of Iraqi Kurdistan’s forests — more than 890,000 hectares — were destroyed, mostly by logging, forest fires, and livestock grazing. As for poaching, between 2001 and 2014, at least nine leopards were killed by local people along the border between Southeastern Turkey and Northern Iraq. And more recently, in 2020 one leopard was killed on Peramagroon Mountain and another in Bamo. (The cats face similar threats elsewhere as well. In Iran, which is home to about 65 percent of the remaining Persian leopards, at least 147 leopards were killed between 2000 and 2015.) 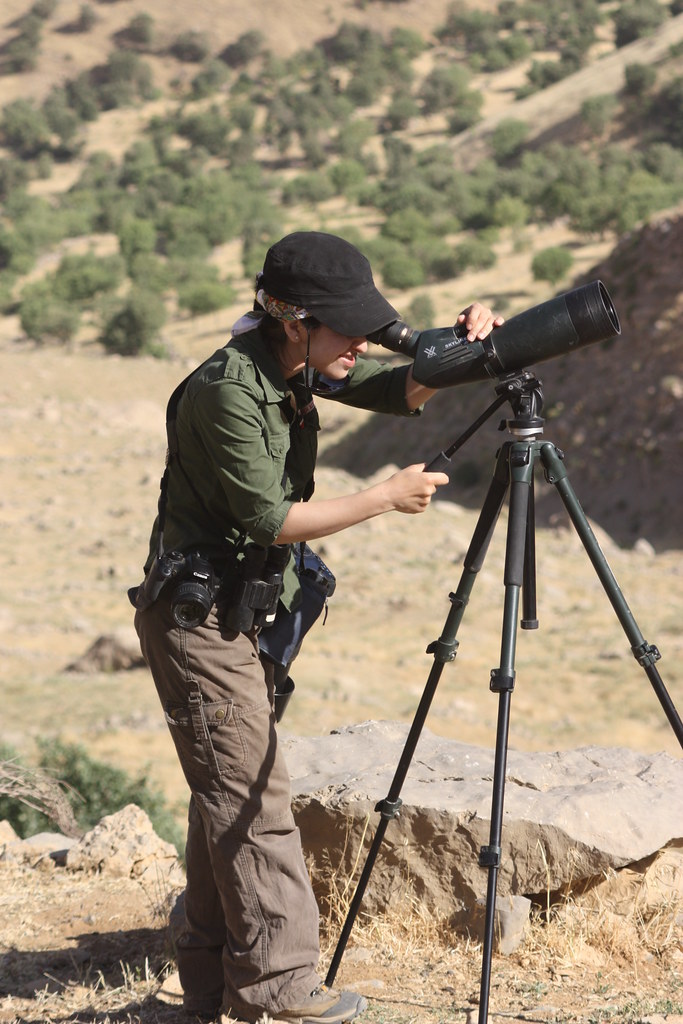 Ultimately, Raza would like to create a transboundary park between Iran and Iraq, but does not currently feel safe working in the border areas due to persecution of Iranian conservationists. Photo by Laith Ali. There are an estimated 20 to 25 Persian leopards in Iraqi Kurdistan. Raza has captured six on her camera traps. Photo by Persian Wildlife Heritage Foundation / Hamed Abolghasemi.

The country is also polluted by approximately 20 million landmines, many of which were planted along the Iranian border during the Iran-Iraq War. In addition, millions of unexploded cluster bombs from the 1991 Gulf War and the 2003 US-led invasion litter the landscape, as do improvised landmines left behind by ISIS over the past two decades. These mines pose a danger to the cats — it is believed that at least two leopards have been killed by mines — though they also discourage locals from venturing into the forest to poach or log.

In the past decade, Kurdistan has also accepted more than 2 million refugees from Southern Iraq and Syria. The ongoing instability in the region has understandably diverted attention, and funding, away from conservation work.

Given the small population of Persian leopards, each individual is critical. But the Kurdistan forest police department, which is a division of the Ministry of Interior and is responsible for patrolling the mountains, just doesn’t have the capacity to combat poaching — after the War in Iraq (2014 to 2017), most of them were moved to fight ISIS.

RAZA BELIEVES THE PRIMARY way to protect Persian leopards and increase their numbers is to establish protected areas and habitat corridors and properly manage them, which will allow leopards to freely pass from one protected area — and one country — to another. Which is why in 2016, she started collaborating with the Persian Wildlife Heritage Foundation to create a peace park between Iraq and Iran. The transboundary project included three areas in the Kurdistan region (Qara Dagh, Darbandikhan, and Hawraman) and two established areas in Iran (The Bozin-Marakhil and Shaho-Kohsalan Protected Areas).

But in 2018, the Iranian government imprisoned 13 people affiliated with the organization, accusing them of spying with their wildlife camera traps. The managing director of the organization, Kavous Seyed-Emami, died in the prison shortly after his arrest and the rest of the staff are facing 4 to 10 years of imprisonment. Currently, the project is stalled and leopards and other big cats in the country continue to face the threat of illegal poaching. In Iran, only limited research with supervision from the government is conducted.

Online
Caught in the Crossfire

An arid country with mismanaged water resources, Iran is on the frontlines of the climate crisis. Yet it is persecuting experts who could help it chart a path for the difficult decades to come.

Even though Raza is allowed to continue research and conservation in Iraq — including site visits, checking nature reserves in Qara Dagh, engaging with government officials and journalists, conducting field surveys, and data collection — she doesn’t feel safe traveling to or working near the border areas. With the transboundary project on hold, Raza has had to redirect her focus on establishing a separate nature reserve in Qara Dagh with the vision to connect this reserve to the transboundary project once it is reinstated.

In 2019, Nature Iraq received funding from IUCN Netherlands Land Acquisition Fund and set aside 2,200 hectares in Qara Dagh in collaboration with the Kurdistan Board of Environment in order to create a nature reserve. Due to Covid-19, government approval has been delayed, but is expected by 2022 or 2023. Once the Qara Dagh reserve is approved, the Kurdistan Region forest police will patrol the area against poaching and logging.

But even once the reserve is established, funding will pose a challenge. “Whenever I come to negotiate with the Kurdish government, the first thing they tell me is, as long as you don’t ask us for money, we can help you,” says Raza. Since oil prices crashed in 2014, the government has had difficulty paying its employees. The Kurdistan forest police receive regular payments, unlike many other government officials, but funds are not sufficient for securing basic needs for mountain stations or even for buying fuel for cars. In order to keep the officers patrolling the area, Nature Iraq has helped them with basic maintenance of stations and cars.

Once with a team of over 100 staff, Nature Iraq is now, too, struggling with a lack of funding. The nonprofit is now down to only eight employees, and Raza has been running two projects of her own as a volunteer since September 2019 because most international grants that support conservation projects do not provide staff salary.

Another challenge that Raza faces is that environmental protection isn’t a high priority for the Iraqi and Kurdish governments, due to the complicated political situation and ongoing instability in the region, as well as an overall lack of information about Iraq’s wild places. Apart from a few studies conducted by foreign biologists in the 1920s, 1950s, and 1960s, it wasn’t until 2004 that Nature Iraq was founded and started to rediscover flora and fauna and publish papers in international publications that ecological research in the area picked up. That’s also when Nature Iraq helped the Iraqi government establish the first national park (the Mesopotamian Marshes National Park) in 2014, and started international collaborative projects. Due to the War in Iraq from 2014 to 2017 and subsequent economic crisis, most of these activities were halted.

Besides these obvious obstacles, Raza also has to deal with patriarchal attitudes. Her job requires spending months in the field with men, going to remote villages where she talks to mostly men, and camping in areas that are not safe for anybody. She is frequently reminded of her status as a woman in a male-dominated field, particularly when people ask her questions like “Why aren’t you married?” or “Isn’t it too late to have children now?”

“I had to put a lot of expected plans aside to be able to do my job properly. If I had gotten married or had kids, I wouldn’t be able to do half of what I have accomplished as a single woman,” says Raza, now 33, who obtained a Master’s degree from Newcastle University in the UK in 2020 after having postponed this plan for 10 years because of projects she could not leave in Iraq.

“As difficult as living in this country is, I don’t want to leave because I feel compelled to protect our wildlife,” Raza concludes. She plans to stay at least until she achieves her ultimate goal of creating a network of connected protected areas for her beloved Persian leopard.

Veronika Perková is an environmental journalist who focuses on wildlife conservation. She is a host of Nature Solutionaries, a podcast about conservationists who do amazing things for nature and bring inspiration into people's lives. She is also a lecturer at Masaryk University, Czech Republic and author of the book "Ask Great Questions, Get Great Answers."