Last week, Project Coyote partnered with five other wildlife conservation groups — the Center for Biological Diversity, Animal Legal Defense Fund, Western Watersheds Project, Animal Welfare Institute, and WildEarth Guardians — in suing the US Department of Agriculture’s (USDA) Wildlife Services program over its outdated wildlife-killing plan for Northern California. The organizations argue that federal trappers employed through the program regularly use painful leg hold traps, strangulation snares, poisons, and aerial gunning to kill wolves, coyotes, cougars, and other wild animals, primarily to benefit the agriculture industry. The noprofits further contend that the federal government has failed to properly analyze the impacts of the program as required by the National Environmental Policy Act (NEPA). 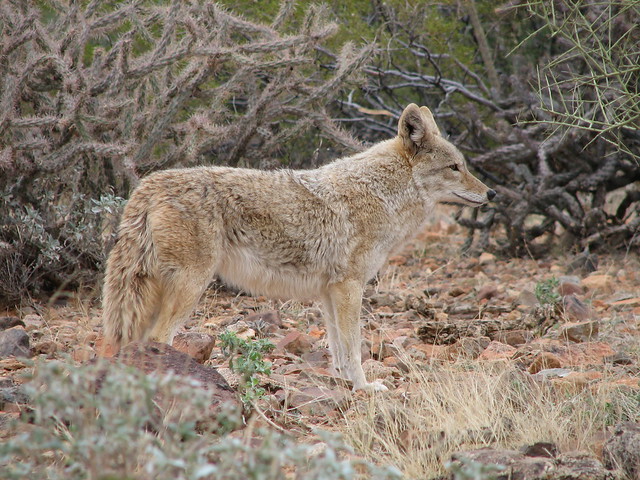 If successful, the lawsuit, filed in US District Court in San Francisco, would force the USDA to do an environmental analysis of its Wildlife Services program in the northern district of California, and to consider alternative wildlife management policies.

“There’s an increasing body of scientific literature showing that the way predators have been managed in the United States is not in line with the best available science, nor is it in line with human values and attitudes about wildlife,” said Camilla Fox, founder and executive director of Project Coyote.

The lawsuit — which covers Butte, Humboldt, Lassen, Mendocino, Modoc, Nevada, Plumas, Sierra, Shasta, Siskiyou, Sutter, Trinity, and Yuba counties — is one of several legal actions in the Western United States to either stop counties from hiring federal trappers or force the government to alter its predator control policies. Other suits have been brought in Colorado, Oregon, and Wyoming. Most recently, Project Coyote and partners formally petitioned the Wildlife Services program for an immediate ban on the use of M-44 cyanide devices in Wyoming.

Few Americans have ever heard of Wildlife Services, a little-known USDA agency charged with managing wildlife, largely at the behest of ranchers and agribusiness. Since 1931, this agency has been waging war against wildlife with its lethal arsenal.

Officials with the USDA Animal and Plant Health Inspection Service, which oversees the wildlife management program, have repeatedly defended use of lethal force.

“As a federal leader in resolving human-wildlife conflict, Wildlife Services uses a responsible and science-based approach to address damage and problems caused by wildlife,” an agency spokesman wrote recently in response to a similar lawsuit by Project Coyote and partners in Mendocino County. “In cases where nonlethal methods are impractical or have been unsuccessfully implemented in California, we may pursue lethal removal.”

(The Mendocino lawsuit was successful: In 2016, Mendocino County agreed to terminate its contract with Wildlife Services.)

Last year, 1.6 million native animals were killed by federal trappers nationwide, including 3,893 coyotes, 142 foxes, 83 black bears, and 18 bobcats, according to the lawsuit. Some 80,000 animals are killed in California a year according to Wildlife Services charts.

This doesn’t include the collateral damage. According to Sacramento Bee investigative reporter Tom Knudson, Wildlife Services has, since 2000, mistakenly killed more than 50,000 non-target animals, including several federally protected species and more than 1,100 dogs. One federal trapper in Mendocino County reported killing 400 dogs that roamed onto private property.

“Wildlife Services’ cruel killing practices are ineffective, environmentally harmful and totally out of touch with science,” Collette Adkins, a Center for Biological Diversity attorney representing the conservation groups involved in the lawsuit, said in a statement. “It’s long past time that Wildlife Services joined the 21st century and updated its practices to stop the mass extermination of animals.”

NEPA requires Wildlife Services to rigorously examine the environmental effects of killing wildlife and to consider alternatives that rely on proven nonlethal methods to avoid wildlife conflicts. But the wildlife-killing program’s environmental analysis for Northern California is more than 20 years old. According to the June 21 complaint, Wildlife Services must use recent information to analyze the impacts of its wildlife-killing program on the environment and California’s unique wild places.

“NEPA requires that federal agencies use the best available science in analyzing the impacts of their programs, and we believe Wildlife Services has failed to do this and has in fact cherry-picked their science to meet their goals,” said Fox. “Moreover, they must consider alternatives to indiscriminate killing and analyze the site-specific and cumulative impacts that killing large numbers of wild animals has on the diversity and integrity of healthy ecosystems.”

Project Coyote, among others, has been pushing for government support and training in nonlethal methods like livestock guard animals, fencing, night corrals, lambing sheds, fladry (a line of rope mounted along the top of a fence with hanging strips of fabric that flap in a breeze, intended to deter predators from crossing the fence-line), and disruptive stimuli-based deterrents such as Foxlights (a light-activated device with randomly flashing lights that gives the impression of movement at night time). Indeed, Wildlife Services has been researching nonlethal predator management options for decades, though the number of animals killed has remained relatively constant.

In 2014, Project Coyote led a coalition of twelve nongovernmental organizations in a meeting with USDA officials in Washington, DC to press for agency reform and greater transparency and accountability with respect to Wildlife Services’ predator control program. Project Coyote hand-delivered a petition with close to 100,000 signatures calling for an investigation into reports of animal cruelty by the agency.

After this meeting, Project Coyote and the Center for Biological Diversity filed a formal petition with the USDA demanding that Wildlife Services develop a regulatory code — something every other federal agency maintains. Representatives Peter DeFazio (D-OR) and John Campbell (R‑CA) subsequently requested a formal investigation to determine whether the agency’s “wildlife damage management activities were justified and effective.”

In the past, Marin County, like most California counties, contracted with Wildlife Services to provide federally subsidized predator removal services for ranchers. In 2000, however, public outcry over the agency’s proposed testing of the deadly poison Compound 1080 — a toxic compound used in livestock collars that can poison predators attempting to take down an animal — as well as its use of snares, “denning” (killing pups in their dens), and other inhumane methods to kill wildlife, compelled the Marin County Board of Supervisors to vote to terminate its contract with Wildlife Services.

“[Livestock] losses fell from 5.0 to 2.2 percent while program costs fell by over $50,000,” said Marin Agricultural Commissioner Stacy Carlsen. “The success of our county model has set the trend for the rest of the nation.”

“Killing native wildlife at the behest of the ranching industry is morally unconscionable and scientifically unsound,” Erik Molvar of Western Watersheds Project said in a statement about the recent lawsuit. “Carnivores play an important ecological role, and exterminating them upsets the balance of nature.”

Correction: An earlier version of this article omitted Animal Legal Defense Fund in the list organizations bringing the lawstuit.