Camouflaged soldiers move through the dense fog of Colombia’s Páramo de Sumapaz, a high-altitude wetland overlooking the capital, Bogotá. Although this wetland has been the site of years of intense fighting between government and rebel forces, the soldiers posted here are not engaged in military action — they’re gardening. 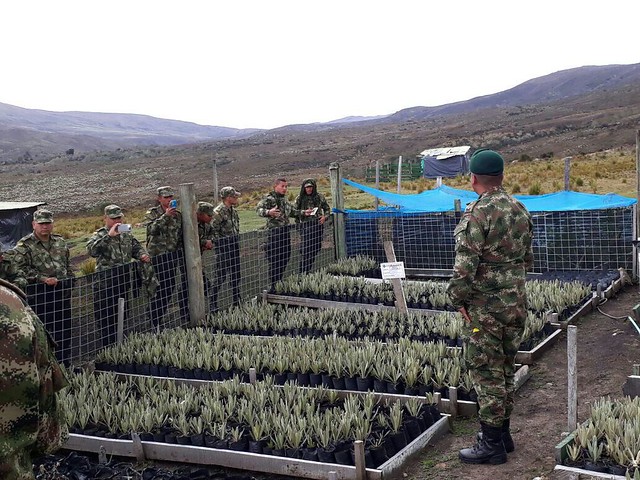 The soldiers in the Páramo de Sumapaz belong to Colombia’s First High Mountain Battalion (BAM, for its Spanish name). Trained to hunt their opponents over a hostile high-altitude environment of perpetual fog and sub-freezing temperatures, they are now engaged in building greenhouses, nursery plots, and laboratories. Their mission is the cultivation of the furry, cactus-like frailejón (fry-lay-HONE). This rare and endangered plant is key to ensuring Colombia’s main source of fresh water. And it is disappearing.

“The loss of frailejones might cause the collapse of the páramo ecosystem, with huge consequences for the human populations relying on its ecosystem services,” said Dr. Mauricio Diazgranados, one of Colombia’s foremost frailejón experts and the research leader at the Natural Capital and Plant Health Department at the Kew Royal Botanical Gardens in the United Kingdom.

Diazgranados does not exaggerate the region’s importance. Roughly 70 percent of Colombia’s population gets their water from the páramos, where the frailejón is a “keystone species,” meaning that the other plants and animals of its ecosystem depend upon it for their own survival. Humans too, are dependent on this native plant: In the perpetually foggy páramos, the frailejón traps tremendous amounts of fog on its downy surface. The fog sticks to the frailejóns’ skin as water droplets, which fall to the ground when they grow sufficiently heavy. The accumulated water flows into the lakes and rivers that act as reservoirs for both drinking water and hydroelectricity for most of the country.

Researchers have identified several causes for the decline of the frailejón, among them warming temperatures, longer and drier days, increased pest populations, expanded agricultural use of the páramos, and Colombia’s civil war, which ended in 2016.

Photo by Forest Ray The frailejón is a keystone species in Colombia’s high-altitude páramo ecosystems, which supply roughly 70 percent of the nation’s drinking water.

Of the above threats, all but the war can be tied directly to climate change. Rising temperatures and more sunny days have placed added environmental stresses on the frailejón and encouraged people living in the páramos to expand their agricultural operations, which both compete for space used by frailejones and introduce new pests to the region. A fungus associated with potato farming, for example, has been implicated in the declining health of at least one species of frailejón. Other microbial pests have also been following the warmer temperatures upward into higher elevations where frailejones had previously been safe. The sunnier weather furthermore exposes frailejones to more UV rays than before, which harms the plants.

According to Dr. José Pacheco, a professor at the Universidad Pedagógica y Tecnológica de Colombia and an expert on frailejón conservation, climate change has already taken a significant toll on the native plant. Drier, warmer weather, in conjunction with the expanded agriculture that invites, has endangered 36 of Colombia’s 68 species of endemic frailejones and placed 7 more close to extinction.

As General Raúl Antonio Rodriguez Arévalo, commander of the army’s Fifth Division, of which the BAM is a part, puts it, “A response to climate change is fundamental.”

The army’s restoration work dates back to early 2015. Approximately two years before the government and the FARC signed their historic peace accord and while scattered fighting still took place in the Páramo de Sumapaz, several soldiers of the BAM convinced Gen. Rodriguez to support an effort to revive frailejón populations in that area.

Hernandez Fiero Giovanni, a soldier in the BAM, found some frailejón seeds among burnt plant remains in an area called el Plan de los Águilas and brought them back to Corporal Alfredo Vargas, who had previously trained as an environmental engineer. Fiero Giovanni worried about the loss of the frailejón and wondered what could be done to restore the burned area. Vargas began to experiment with growing frailejones from the seeds found among the burned remains and some initial experimental success led to the formation of the Environmental Group (Pelotón Ambiental in Spanish) and to the creation of a larger pilot restoration project, both projects of the army.

“The idea,” says Cpl. Vargas, “is to protect our nation’s most important water source, so that it doesn’t dry up.”

The Pelotón Ambiental carried out the pilot project largely on its own throughout the first year. Then, in May of 2016, Dr. Eloisa Lasso, a prominent frailejón specialist at the Universidad de los Andes in Bogotá, who had been studying the páramo ecosystem and frailejones in particular since the 1990s, received an unexpected and surprising phone call. A group of soldiers wanted to know if she could help them improve their frailejón seed isolation, germination, and transplantation techniques.

A year later, the Pelotón Ambiental has just over 10,000 plants in their greenhouse and another 30,000 seedlings in their germination lab. For the mission to be a success, the frailejones grown by the group must survive transplantation into the wilds of the páramos, their native habitat, to begin repopulating the region. So far, the army has successfully transplanted approximately 4,000 frailejones.

Photo courtesy of Batallón de Alta Montaña Número 1 As part of their restoration work, Colmbian soldiers isolate frailejón seeds. Pelotón Ambiental has just over 10,000 plants in their greenhouse and another 30,000 seedlings in their germination lab.

The soldiers do not intend to restore the páramos on their own. Another goal is to enlist the cooperation of the farmers living in Colombia’s páramos, a difficult task that will require time and diplomacy. While the number of people living in the páramos is small, their agricultural and grazing activities have outsized effects. Declining hostilities and a more crop-friendly climate have opened up land in the páramos, offering farmers a more economically secure future. This opportunity runs somewhat counter to the army’s need to manage agricultural impacts in the fragile páramo environments. Due to decades of conflict with both government forces and guerillas, trust in the army will not come easily to the páramo dwellers, many of whom have lived in here for generations and feel deeply possessive of their territory. Any comprehensive effort to secure a future for the frailejones will have to take the needs and concerns of the páramo dwellers into account.

One páramo dweller, Doña Mave, who preferred not to give her last name, is a robust middle-aged woman who bustles about the steamy interior of her wood-heated kitchen in the páramo of Los Nevados National Park, south of the Sumapaz. Doña Mave runs Finca la Primavera, a small farm that also offers lodging for those trekking through this desolate and fog-shrouded highland. Mave and her family bought la Primavera with the intention of combining agriculture with the park’s nascent eco-tourism industry. Before buying la Primavera, her family worked at a purely agricultural farm deeper in the páramo.

“We just worked the land there,” she says. “We raised cattle and cultivated potatoes, but the money was very bad. We just couldn’t make enough.”

Finca la Primavera provides Mave with the means to give her children a more prosperous future. A native of the páramos and someone who feels out of place in even the nearby small town of Salento, she cannot imagine a life beyond the highlands.

Despite her attachment to the land, she and her family have left their mark upon it. The landscape is dotted with the skeletons of the romero de páramo bushes that provide useful firewood at this altitude, their branches stripped for fuel. Cow trails crisscross the hillsides, the remains of frailejones trampled in their path. Blackened bushes and grasses show evidence of where fire was used to clear the land for agriculture. This is just the sort of thing that the army wishes to manage.

At the moment, the army has made few advances in recruiting the support of the páramo civilians.

The army’s first priority is to complete the pilot project in the Sumapaz and replicate it in other páramos throughout Colombia. Already, other units have begun their own frailejón restoration projects elsewhere in the country, building on the methods elaborated by the PA. Because each páramo hosts its own endemic frailejón species, cultivation techniques will have to be in adapted to each species’ unique biology.

Cpl. Vargas also points out another group that may prove useful in future ecological restoration efforts: the former guerrillas of the FARC, the army’s former enemies. “These are people who know this land as well as anyone else and have an incentive to help restore it,” he said.

In that sense, the goal of the project goes beyond protecting water sources and ecosystems. “This project is meant to support the people, the environment, and the nation,” Cpl. Vargas said.

If successful, Colombia’s effort to restore and protect its frailejones could serve as a template for how to confront other challenges related to climate change. More than that, it could demonstrate a way to cultivate peace and cooperation, not only in Colombia, but in other regions that sorely need it.