Colombia is currently in the midst of a peace process with the Revolutionary Armed Forces of Colombia (FARC), the country’s largest guerrilla group. Praised as the end of the Western Hemisphere’s longest-running armed conflict — which began in 1964 and has cost the lives of more than 265,000 Colombians and left over 7 million displaced — 7,000 members of the FARC have since left the jungle and turned over their weapons as part of the peace deal. The Colombian government began negotiations to end the conflict with the FARC in 2012, and by June 2016, both the government and the rebels reached a bilateral ceasefire, officially ending the violence between the two parties. The FARC officially demobilized in February 2017, though the process began in 2016.

According to the independent conflict monitor group Cerac, the ceasefire between the government and the guerrillas has already prevented an estimated 2,800 deaths, but environmental advocates worry that it may have an unintended consequence: that the power vacuum left by the demobilized FARC guerrillas will lead to further destruction of the Amazon rainforest. 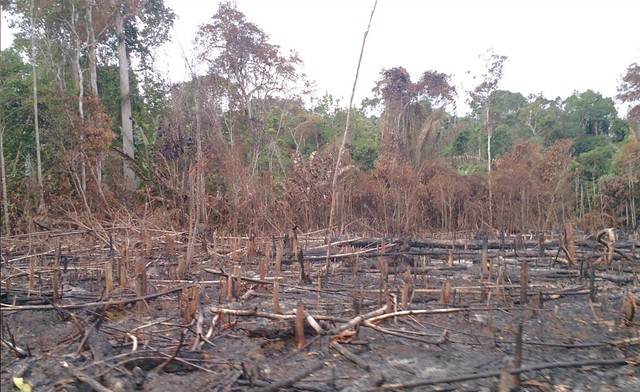 photo courtesy of Corporation for the Sustainable Development of the North and the East Amazon Deforestation has increased significantly in the Colombian Amazon since FARC rebels began moving towards demobilization.

In July, Colombia’s Institute of Hydrology, Meteorology and Environmental Studies (IDEAM) announced that deforestation shot up 44 percent in Colombia in 2016 compared to 2015, with the heaviest deforestation taking place in territories formerly controlled by the guerrillas.

Over the course of the 2016, IDEAM says that 178,597 hectares — 690 square miles — of forests around the country were destroyed, primarily by large-scale agriculture, logging, coca cultivation, road infrastructure projects, illegal mining, and human-caused forest fires. Authorities are particularly concerned for the country’s Amazon region, where 34 percent of all deforestation took place last year.

The Amazon is the world’s largest tropical rainforest. It covers more than 2 million square miles and houses at least 10 percent of the planet’s known species. Furthermore, the Amazon rainforest absorbs approximately 1.5 billion metric tons of carbon dioxide each year, making it one of the world’s most important carbon sinks and an invaluable buffer against human-caused climate change. Roughly 6 percent of the Amazon rainforest is found in Colombia.

The Colombian government, boosted by $300 million in aid from Germany, Norway, and the United Kingdom, promised to reduce net deforestation in its Amazon region to zero by 2020 as part of the Paris Climate Agreement. However, sources close to the ground say this goal is unlikely to be fulfilled unless a dramatic turnaround takes place, including improved on-the ground state presence and regulation in the regions previously occupied by FARC rebels.

Over the course of 52 years of conflict, Colombia’s natural resources were exploited by the FARC rebels to help fund their insurgency. FARC members participated in illegal cultivation of coca — the notorious plant necessary for cocaine — and illegal mining to finance their insurgency. These activities led to environmental degradation and deforestation in sensitive biological areas including state-run national parks. (Read more about how guerilla forces ravaged Colombia’s protected areas.) Attacks on oil infrastructure in southern Colombia in places such as Putumayo and Tumaco perpetrated by the guerrilla forces also led to a stream of local environmental disasters that contaminated water supplies.

At the same time, however, the presence of the armed group in remote areas of the country limited industrial development because of the risk of kidnapping, extortion, and infrastructure attacks. Furthermore, according to local media Silla Vacia, in the communities where the illegal armed group exercised control, the locals were restricted from cutting trees, hunting animals, and throwing trash in the rivers.

The Mayor of Cartagena del Chairá, Luis Francisco Vargas, told local Semana magazine that the FARC handed out a “coexistence manual” at community board meetings that included environmental rules for the community to follow.

And though the FARC rebels encouraged locals to switch from marijuana and coca cultivation to cattle ranching when the Colombian government began cracking down on illicit agriculture in the in the 1990s, they imposed restrictions on how much land could be cleared for grazing.

“They also said that you had to ask for permission from the guerrilla and community board to cut down trees,” he added. “And they defined environmentally protected zones where nobody could have land.”

The group imposed these “environmental regulations” through charges that they used to enforce “quotas.” For example, a rural farmer might only be allowed to cut down 50 percent of their land for grazing, while they were required to maintain around 50 percent as forest. They were required to request permission and pay a fee on all forestland cleared for pasture.

While the rules helped to preserve parts of the rich Amazonian ecosystem for decades during the armed conflict, they also protected the rebels, who used the forest canopy as cover from the military air force and drones. Now that FARC is gone, no one is enforcing these rules.

Mario Baron is director of Corpoamazonia, a government environmental development agency in the southeastern region of Caqueta, which has been hit the most severely by the recent deforestation surge. According to Baron, for many years the Marxist guerrilla group was the de facto authority in Colombia’s generally lawless Amazonian region, which was an epicenter of the armed conflict. He said that the demobilization of the guerrillas has created a power vacuum, and other illegal armed groups have moved in to fill the gap.

“Since the FARC demobilized, there has been an effective absence of the state in the region,” said Baron. “Nobody has the capacity to control what is going on at this point.”

These groups are now contributing to deforestation in the region. According to a source consulted for this article — who wished to remain anonymous due to security concerns — the armed groups, such as the paramilitary Libertadores de Vichada and the dissident FARC guerrillas who are not participating in the peace process, are cutting down the rainforest in order to launder earnings from other illicit activities. By investing in the destruction of the rainforest, the illegal actors can take previously “unproductive” forestland and convert it for cattle ranching and other agricultural activity which they hope will eventually turn a profit.

But it’s not just armed groups contributing to the destruction. Local governments and residents are playing a role as well.

According to Wilfredo Pachón, director of the government agency Corporation for the Sustainable Development of the North and the East Amazon (CDA) in San Jose de Guaviare, which is north of Caqueta, expanding road infrastructure projects are also causing virgin rainforests to be cut. Pachón told Mongabay.com that land cleared for grazing is worth three times more than when it is forested, and with the government enacting infrastructure projects that make region easier to access, the economic pressures for deforestation are growing.

In conversations with people in San Jose de Guaviare, I found that many of the locals felt that cutting down the forests was wrong, and recognized the value in conservation. But due to poverty and a lack of economic opportunities, they view cattle ranching as the only economically viable option.

The Colombian authorities have been slow to address the power vacuum issue. In April, the country was criticized by the UN for its sluggish response establishing territorial control in regions formerly controlled by the FARC.

US Ambassador Nikka Haley urged government authorities to establish order quickly in the areas left behind by the demobilized rebels.

“It’s no secret that as the FARC move into demobilization zones they leave behind remote, lawless areas that had been largely untouched by the Colombian government. The political vacuum this has created is a dangerous threat to long-term peace,” said Haley. “It must be filled before other armed groups, including drug traffickers, step in.”

That’s not to say the government is doing nothing. The central government is trying to limit deforestation in the Amazon and other regions of the country through a structural solution called Visión Amazonia. The program, managed by the Ministry of Environment with the help of international aid, is aimed at mitigating Colombia’s contribution to climate change through the protection of Amazonian rainforest.

One of the strategies that the government is using is to pay local landholders and tenants in order to ensure that they preserve the forest. The government is also trying to promote sustainable use of the forest by developing agroforestry-related activities.

Furthermore, Minister of Environment Luis Gilberto Murillo says he hopes to help integrate demobilized FARC combatants by using their intimate knowledge of the forest to take on a roles as “guardians of the forest.”

In total, 3,810 people will take part in the program, 30 percent of whom will be ex-combatants. The rest will be local community members. The training program, which began in June, will last 18 months and has $3 million in funding from the Norwegian government.

“We hope that the transitioning guerrillas will have the option to serve as stewards of the environment,” said Gilberto Murillo. “They will be trained in the conservation, use and management of natural resources, and sustainable development, benefiting the inhabitants and their territories.”

Moreover, the government is organizing a joint effort between the military, police, and public prosecutor aimed specifically at tracking down and prosecuting criminal groups responsible for illegal deforestation. Specifically, the authorities will focus on large land speculators who are buying up big tracts of forest from rural farmers and Indigenous groups in order to clear them, as well as those who promote “invasions” of protected areas in order to engage in illegal activities such as unlicensed mining and logging.

However, time will tell if these efforts are effective in bringing peace and stability to Colombia’s Amazon region and stopping the destruction of the rainforest that unless addressed, as Corpoamazonia said in a recent release, “could be creating and setting the bases for a new conflict” in a not-so-distant future.