Just 5 percent of California farmers use cover cropping, but that's likely to change as researchers start to track many benefits
This article originally appeared on the Water Deeply.
Jane Braxton Little

This spring in California several orchards around Solano and nearby counties sported a new look: lush carpets of mixed grasses growing as tall as 3 feet beneath the trees’ bare branches. By summer the scene will change as farmers grow and harvest their nut crops, but the work of the grasses will continue unseen. 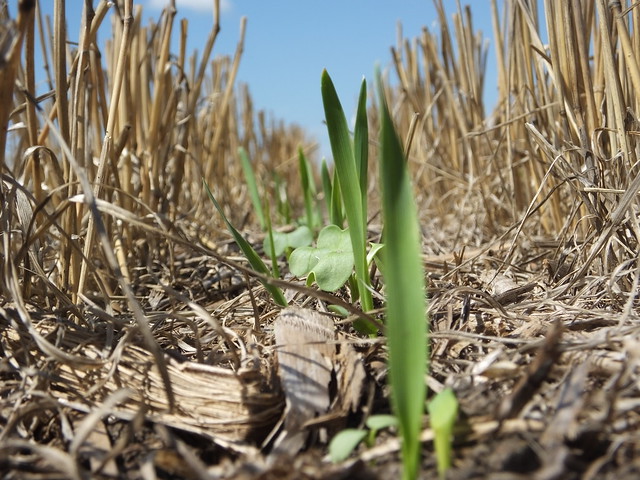 Photo by USDA NRCS South Dakota Cover crop seedlings push through the soil wheat stubble on a South Dakota farm. Despite the many ecological benefits, only 3 percent of farmers currently use cover crops nationwide.

Cover cropping, an agricultural technique as old as dirt, is taking root in California. Used to enhance soil nutrition and improve the growth of plants, it fell out of favor after World War II when the practice was replaced by the use of chemical fertilizers.

Farmers have used off-season plantings for millennia to build soil and keep it from blowing or washing away. Like their predecessors, walnut and almond growers are using these seasonal noncash crops to hold in moisture and provide habitat.

Farmers are also returning to the practice to curb the effects of a changing climate. As hotter and drier conditions hit most of the state, Central Valley growers are planting grasses and legumes under their trees to increase the carbon and nitrogen in their soils. And as implementation of the state’s new drought-driven groundwater regulation approaches, they are testing the ability of cover crops to increase the amount of water stored in the ground that grows their nuts and vegetables.

“Folks are really thinking hard about where their water comes from, and they’re thinking about carbon, too — things that are new in terms of farming systems in relationship to the world,” said Wendy Rash, a district conservationist with the United States Department of Agriculture’s Natural Resources Conservation Service.

She is part of a loose coalition of growers, scientists, and conservationists working to expand the use of cover crops and identify the places where they can provide the greatest ecological benefit at the lowest cost to the farmer. Some are weighing the economic advantages and risks, some the potential for effecting agricultural policies.

Among these efforts is an ambitious project aimed at a seemingly incongruous goal: river restoration. The Freshwater Trust, a Portland-based conservation group, is designing a tool that will help monitor and track efforts to increase the health of water and soil at a landscape scale. It is based on the premise that cover crops help boost the water that goes into the ground, recharging the aquifer. Maximizing these groundwater reserves lessens the demand for surface water, which leaves more water for rivers. And more water in streams benefits fish and riparian species, said Erik Ringelberg, the Freshwater Trust’s California director.

“From a conservation perspective, that’s a win for us,” he said.

Funded by a $779,000 grant through the Natural Resources Conservation Service, the Freshwater Trust is developing a data-driven system to demonstrate the on-the-ground benefits of cover cropping — and those below the ground, too. It’s a high-tech tool for a humble, time-tested practice.

The use of cover crops is definitely on the rise in the northern Sacramento Valley, said Sara Tiffany. As a specialist with the Community Alliance of Family Farmers Climate-Smart Farming program, she works with growers not represented by larger agricultural organizations. On a farm in Colusa County, the grower was losing topsoil to erosion, which carried it down the slopes of his mature walnut orchard. Tiffany suggested a mix of clover and small grasses to create a perennial cover crop designed to hold the soil in place and reseed itself. It worked, she said.

Just how much water is actually percolating into the water table is largely a matter of anecdotal observation. That, however, could change as the Freshwater Trust gathers data related to water usage. It should also help growers and the conservation community identify steps they can take collectively to maximize effective groundwater management at a watershed scale.

The Freshwater Trust project focuses on the state’s 2014 policy regulating groundwater management, and on the recent application of a 2003 policy regulating agricultural discharge. Both involve farmers, and both are often viewed as onerous, said Ringelberg. The Freshwater Trust has taken the approach that these regulations, administered by separate agencies, can be used to benefit growers as well as the larger watershed.

Ringelberg is working through special districts to monitor the effects of cover cropping on groundwater. As the roots of clover and beans reach down through the soil, they loosen it, making it more receptive to water soaking in from the surface. This also helps farmers deal with agricultural runoff, monitored through the regulation initially designed to limit pesticides entering waterways but now applied to all discharges. By helping absorb water where it falls, cover crops contribute to compliance with the state Irrigated Lands Regulatory Program.

Ringelberg, who helped the Freshwater Trust launch its program early this year, is optimistic that it will demonstrate benefits to both growers and the aquifer. “There’s a lot of additional water that can be brought into the systems immediately helping the conservation of fish and wildlife, and in many cases it can significantly enhance farmers’ productivity,” he said.

To determine how much or how little productivity is affected, Alyssa DeVincentis is building an economic model showing the costs and benefits of cover cropping over time. These are basically unknown despite the longevity of this practice, said DeVincentis, a PhD candidate in hydrologic sciences at University of California, Davis.

Her study is calculating the direct cost-benefits such as planting and purchasing seeds. She is also analyzing the indirect costs and benefits — more important but harder to quantify, she said. They include healthier soil, reduced water usage, and “the feeling that things just run more smoothly with cover cropping,” DeVincentis said. She hopes to be able to say the benefits will outweigh the risks within a determined range of years, and to quantify how much water cover cropping actually uses. Although it is beneficial in numerous ways, “at the end of the day cover crops use water,” she said.

The data the Freshwater Trust, DeVincentis, and others are generating could contribute to policies that include cover cropping among the methods for managing groundwater sustainably. Combined with the on-the-ground work of Rash, Tiffany, and others, California’s Central Valley farmers may be pioneering techniques that can be applied around the world as the planet becomes hotter and drier.

For Ringelberg, the ultimate goal is to change the pace and scale of conservation — “to actually help the health of an entire watershed.” Improving groundwater recharge by encouraging cover cropping near rivers is one way to do that. He believes the Freshwater Trust model will provide the data to make site-specific decisions with far-reaching effects.

Rash is as anxious as anyone to have data that proves her hunches about the multiple benefits of cover cropping. But she does not need it to validate the inner satisfaction she gets when she sees orchard floors blanketed by winter carpets of green. “They are just good for my soul,” she said.