Driving through the Owens Valley, a scenic 75-mile-long, U-shaped cul-de-sac on the east side of the Sierras, confirmed extremely dry conditions. California’s prolonged drought wasn’t just visible in the low stream flows, charred hillsides and snowless Sierra Nevada Mountains, but I could hear it. In the small town of Lone Pine, I overheard a man say: “I guess we won’t get to shower until next winter.” The water situation for local fish isn’t much better. 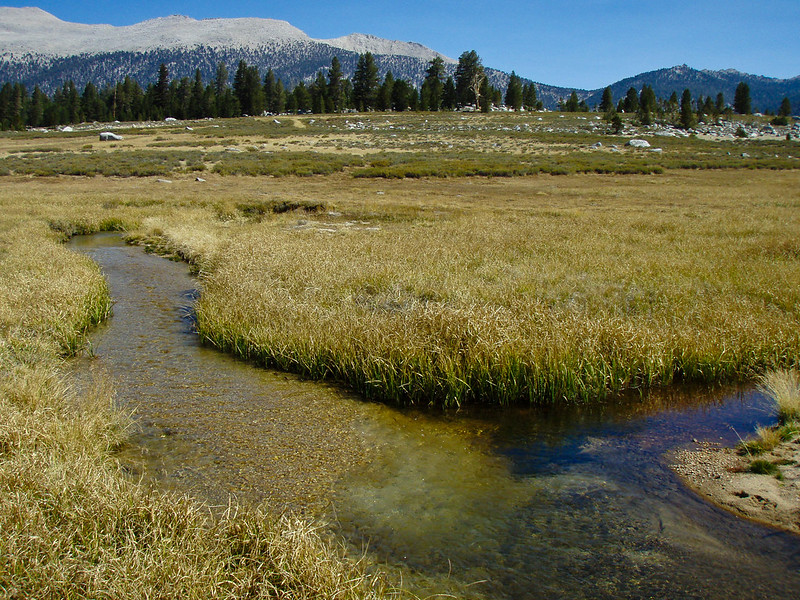 Photo by Michael Carl The freezing mornings aside, camping in the Golden Trout Wilderness in early fall had rewards.

For my journey – a day’s drive followed by four days of backpacking – I wanted to see first hand how one particular “local fish” was doing. At the Whitney Ranger Station, I laid out my trip route into the Golden Trout Wilderness. “You should have the whole place to yourself,” Rene Marshall, the Forest Service Ranger, told me.

She mentioned water would be available in both of my overnight stops – Big Whitney and Tunnel Meadows. Wilderness permit in hand, I drove up to Horseshoe Meadow, packed my camping and fishing gear, and hiked out the next morning over Trail Pass. With the single exception of a packer named Billy and his five-mule pack train, Rene’s prediction was right.

The Canary in the Creek

The freezing mornings aside, camping in the Golden Trout Wilderness in early fall had rewards. Listening to a coyote sing just after the sunset was one. But the high point came after a grueling hike to reach the South Fork of the Kern River – catching and photographing a California golden trout. The golden trout is commonly called “the most beautiful trout in the world.” But in the new era of climate change, golden trout go beyond symbolizing the beautiful state fish of California. These native trout are ecological sentinels. 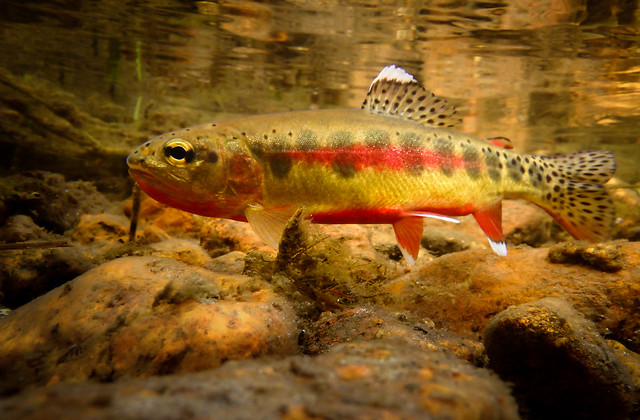 Photo by Michael Carl The California golden trout is commonly called “the most beautiful trout in the world.”

Changing climate poses new risks for California golden trout and intensifies existing stressors from a long history of cattle grazing in their range. New risks resulting from more intense droughts, wildfires, and smaller snowpack will test the resilience of forest and freshwater ecosystems throughout the Sierra. The heavy snowfall on the Sierra Nevada Mountains typically serves as a natural water storage system. But this year, the snowpack hit the lowest level in 500 years. Reduced snowpack will shift stream flow and water temperature during the critical spring and summer months when golden trout spawn and do most of their feeding.

Shouldering a 35-pound pack over a 10,000-foot pass, I quickly came to learn that California golden trout swim in rarified water. They live in narrow streams at around 9,000 feet where flows are thin. Their tiny headwater streams of the South Fork Kern River and Golden Trout Creek on the Kern Plateau have been their only home for 70,000 years. As cold-blooded creatures, these trout completely depend on water to regulate their body temperatures. Water temperatures in the range of 3° to 20°C are ideal for them to breathe, feed, metabolize food, evade predators, and spawn. When stream temperatures exceed 20°C they get stressed. Long exposure to temperatures above that prove lethal.

Here’s the problem – their tiny streams are warming in the summer.

As a research scientist for the US Forest Service, Dr. Kathleen Matthews has been studying California golden trout for over 20 years. Since 2008 she has been monitoring the temperatures of the streams they live in. The 90 temperature probes she stationed throughout three meadow streams reveal a harsh new reality for these trout. Over a five year study, the probes recorded temperatures in two of the streams reaching 26°C with daily temperatures exceeding 20°C for almost two months of one study year. As water warms, it holds less oxygen. When their water warms trout naturally seek out cooler water. Since California golden trout inhabit small headwater streams, it’s hard for them to seek out cooler water.

Lacking an escape route to cooler water isn’t the only downside to their home in the High Sierra. Turns out, the streams with the warmest temperatures in Matthews’ study have been trampled over by domestic cattle. 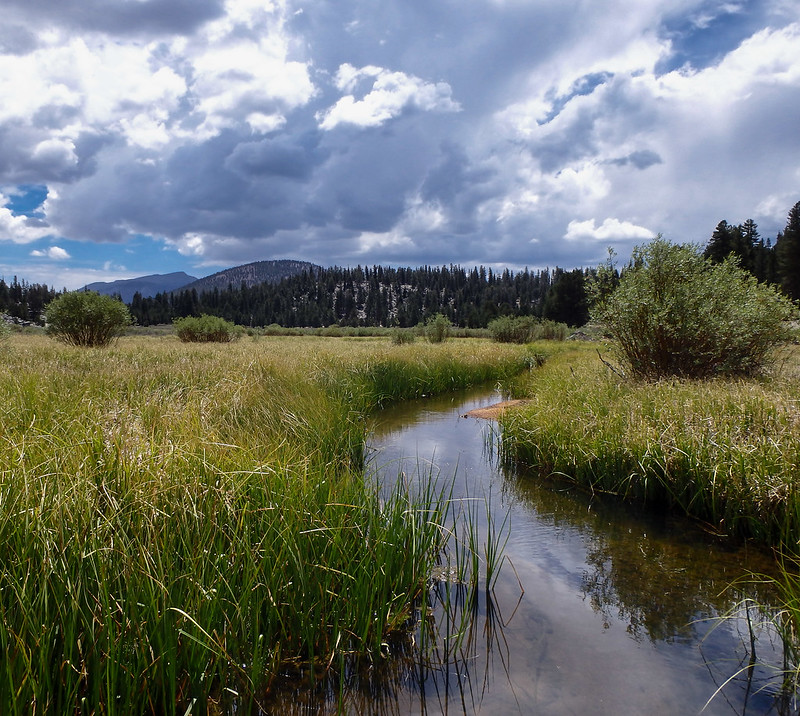 Photo by Michael Carl California golden trout live in narrow streams at around 9,000 feet where flows are thin.

Livestock have a long history of grazing within the Golden Trout Wilderness beginning around 1860. As I hiked the trail along Mulkey Meadows, I saw clear scarring of the meadow, and of course, cow pies strewn everywhere. Worse than eyesores, overgrazing reduces shade-producing vegetation and breaks down fragile meadow stream banks.

What remains are streams without willows to block the sun and a shallow stream channel that turns warmer during the long days of summer. “We haven’t been able to keep golden trout streams in really excellent condition in the presence of cattle grazing,” Matthews says. A healthy golden trout stream, she says, would have “lush streamside vegetation, the water is clear and cool, there is adequate food in the stream, the banks are stable and contain areas of undercutting for shade and hiding, and there are deeper pools.”

The Inyo National Forest administers the wilderness area holding California golden trout. Since the late 1980’s, the Forest Service, with the help of volunteers from Trout Unlimited, California Trout and local fly fishing clubs, constructed fencing around key golden trout habitat. This fencing removed livestock from badly damaged locations and allowed some recovery of stream habitat. But fences break and in remote wilderness areas, without any road access, maintenance is difficult at best.

A far better solution to keeping cattle out of meadow streams came in 2001. Inyo National Forest decided to remove cattle completely from two grazing allotments for at least 10 years. Witnessing the recovery of a meadow rested over a decade, Matthews sees the elimination of grazing as a major step in the right direction. The pay-off comes with a less compacted meadow, more undercut stream banks and greater shade producing riparian cover. And ultimately, the cooling that can help offset effects of climate change.

Climate change is reducing snowpack in the Sierra Nevada due to warmer air temperatures. The snow melts earlier on the Kern Plateau and the high meadows become drier by the end of summer. Climate models predict Sierra Nevada streams and lakes will experience significant warming over the next 100 years. Matthew’s water temperature study sounds a clear warning – streams impacted by overgrazing may not be resilient in the face of future warming.

The Forest Service holds the key to reversing the damage caused by over a century of cattle grazing in these meadows. Native California golden trout live completely within their namesake wilderness. Many conservationists, including Matthews, would like the Golden Trout Wilderness managed as a refuge for golden trout (i.e., the freshwater equivalent of a marine preserve). Looking past their stunning color, these trout are amazing survivors. The California golden trout represents thousands of years of adapting to a changing climate in one of the most extreme environments. Helping these ancient fish survive without domestic cattle in their wilderness home is the least we can do.