The risks of a highly centralized food system
This story was produced in collaboration with the Food & Environment Reporting Network, an investigative journalism non-profit focusing on food, agriculture and environmental health.
Elizabeth Grossman

By now there has been a steady stream of news about climate change’s impacts on food production. Heat waves, drought, and wildfire are damaging harvests in California, Australia and Brazil. Warming and acidifying oceans threaten seafood stocks. Rising temperatures are causing declines in crops as different as wheat and cherries, while extreme precipitation and floods have destroyed crops across the US and Europe. Increasing temperatures and CO2 levels are reducing the nutritional value of grasses and increasing heat stress, in the process impairing animals’ ability to produce eggs, meat, and milk. 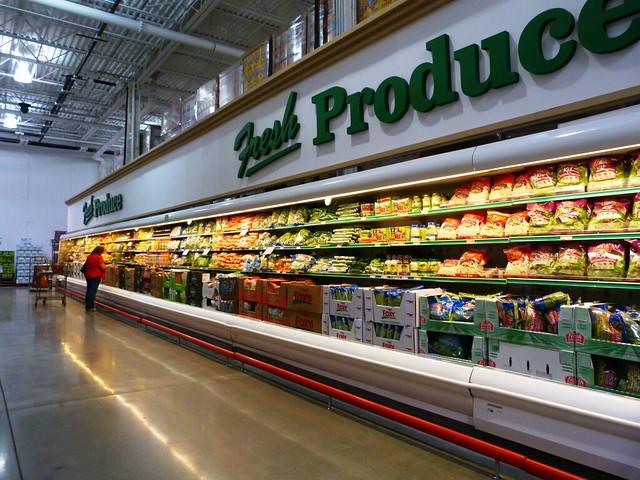 photo by RustyClark (hottnfunkyradio.com), on FlickrThe same effects of climate change that are hurting food production are also highlighting the vulnerability of food distribution systems that rely on long-distance transportation, centralized wholesale markets, and the often concentrated food production sources.

At the same time, climate change is also beginning to disrupt another key aspect of food security: how food gets to market. The same effects that are hurting food production – storm surges, floods, and other extreme weather events all around the world – are also highlighting the vulnerability of food distribution systems that rely on long-distance transportation, centralized wholesale markets, and the often concentrated food production sources.

Farmers everywhere are getting used to the idea of a very different future as they deal with changing patterns of precipitation, temperature, and soil conditions. “Like a lot of growers, I was a little bit in denial, hoping the climate was not changing,” says Elizabeth Ryan, who owns and operates Breezy Hill Orchard, which grows apples in New York’s Hudson Valley. Now, she says, “we’re seeing acute weather swings” and “hail that used to be episodic and occasional is now frequent.”

That the US produces such a massive volume of food does not mean that food security here is invulnerable to climate change, says Diana Donlon, director of the non-profit Center for Food Safety’s Cool Foods Campaign. By way of proof, she points to huge losses that resulted when Hurricane Irene hit Vermont in 2011 and the epic 2013 floods in Colorado. Donlon also notes that in economically developing countries an estimated 40 percent of all food waste already occurs because of problems associated with getting food to market. Recent studies suggest that solving these distribution issues will be key to maintaining adequate food supplies as climate changes. According to Nevin Cohen, a professor of food policy at The New School in New York City: “The food system as a whole is being disrupted by climate change.”

The US federal government has been slow to heed these warnings. The US Department of Agriculture is devoting considerable resources to understanding the impacts of climate change on agricultural production, including through its regional “Climate Hubs” established in 2014. But food distribution is not on the agency’s agenda. “Food to market is not within our realm of responsibility,” says Jerry Hatfield, leader of the USDA’s Midwest Climate Hub.

Some cities, however, are showing a greater sense of urgency in developing ways to make their food distribution networks more resilient. After witnessing the dislocations from extreme weather events, many American cities and states – including Boston, Minneapolis, Miami, New York, Maryland, and Michigan – have begun to rethink the vulnerability of their food distribution systems. The city of Boston is finalizing its 2014 Climate Action Plan, which includes a “city-wide food resilience study,” explains Leah Bamberger with Greenovate Boston, part of the city government’s environmental program. Boston is also analyzing its dependence on distant food sources to better understand “potential weak points,” says city spokesperson Gabrielle Farrell, and looking at how to incorporate more local and regional growers into Boston’s food supply chain. A “robust local food system is a critical component of climate adaptation planning,” says the city’s draft plan, which includes recommendations for local food sourcing for public schools and for supporting urban agriculture and community gardens.

As New Yorkers discovered in the wake of 2012’s Hurricane Sandy, most of the 5.7 million tons of food that arrives in the city annually passes through Hunts Point Distribution Center, the largest wholesale market in the United States, which sits on the edge of the Bronx River, surrounded on three sides by water. Almost all this food comes by truck – nearly 13,000 semis each day – many relying on the George Washington Bridge. “Getting in and out of the city is a challenge under any circumstances, let alone during a catastrophe,” Ryan notes. 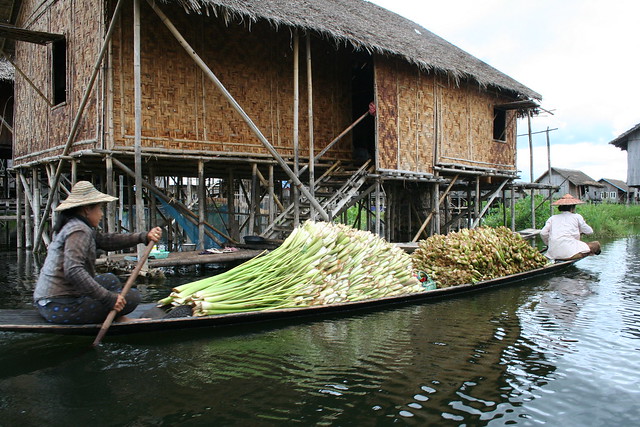 photo by Kaj17, on FlickrIn economically developing countries an estimated 40 percent of all food waste already occurs because of distribution and other problems associated with getting food to market.

Hunts Point dodged a bullet with Sandy. That storm’s surge hit other parts of the city and surrounding areas. Yet food deliveries to Hunts Point and to communities throughout the city were disrupted by storm damage to roads, traffic restrictions imposed to accommodate emergency response and by fuel shortages. Many delivery destinations were inundated and extended power outages caused refrigeration and electronic payment systems to fail. “Supermarket coolers and cash registers couldn’t operate,” Ryan recalls. Some food markets – like the Fairway Market in Brooklyn’s Red Hook neighborhood, which took on five feet of water that destroyed food and equipment – were closed for months.

Hunts Point might not be so lucky next time. Post-storm analysis revealed that Hunts Point lies within a 100-year flood plain and that about a third of the market’s 329 acres has at least a 1 percent chance of flooding in any given year. Sandy raised serious questions about the future resilience of such distribution centers. “What makes for economic efficiency in large-scale agriculture and food production also introduces vulnerabilities,” says Alfonso Morales, an associate professor of urban and regional planning at the University of Wisconsin-Madison. What we’re starting to see, he adds, are “the consequences of the over-centralization of our food distribution system.”

Now, an effort is underway to explore ways to make Hunts Point itself better able to withstand extreme weather. This Hunts Point Resiliency Plan has received $20 million in funding from the US Department of Housing and Urban Development for a “green infrastructure” project that would make the market and surrounding area better able to weather storm surges. The city is also looking at ways to diversify its food sources. One way to do this is by increasing procurement of locally grown and processed food.

Local food policy experts, local growers like Elizabeth Ryan, and farmer’s market organizers are discussing the idea of a wholesale market, separate from Hunts Point, that would focus on regionally sourced food. Another avenue being considered by city officials would enable the city’s public schools to purchase locally sourced food for its meals program. “New York City public schools serve 800,000 meals a day,” says Mark Izeman, director of the New York Urban Program at the Natural Resources Defense Council. “If New York City made a decision to buy local food that could drive the market.”

New York State is already participating in a USDA-supported program that facilitates procurement of locally-grown produce for school meals. In 2013, New York farms provided about 3,000 pounds of tomatoes, 12,000 pounds of apples, and thousands of pounds of carrots, potatoes, broccoli, corn and other vegetables to meals served in dozens of smaller school districts. Expanding this program and creating a large-volume, ongoing market for local farms will be key to diversifying food sources, say experts like Morales and Izeman.

Similar efforts to support local growers, boost urban agriculture, and diversify food hubs are underway in cities around the world. Moving away from the current highly centralized and distant-source dependent system will help bolster resiliency rather than “simply reinforce the existing infrastructure,” Nevin Cohen says.

“I think every city should be thinking about where their food comes from,” Elizabeth Ryan, the Hudson Valley apple grower, says. “The more diversified, the more local, the better.” Such diversification is also important for rural communities “that see themselves as isolated from current production sources,” Donlon explains.

Whether because of Hurricane Sandy or “versions of Sandy,” Ryan says, “people are worried and thinking not only about whether or not they’ll get a crop or not but also about logistics.”

In other words: Bringing a crop to fruition is one thing, but getting that produce off the farm, to market and onto dinner tables is another challenge entirely.