Civil War Spurs Spike in Solar Energy Use in Yemen

Air pollution has been a serious problem in Yemen’s capital of Sanaa, but that’s starting to change. How? Oddly enough, the ongoing war that began in 2015 between the government and a militia loyal to the country’s former president feuding for control of the country helped jumpstart Sanaa’s renewable energy industry. 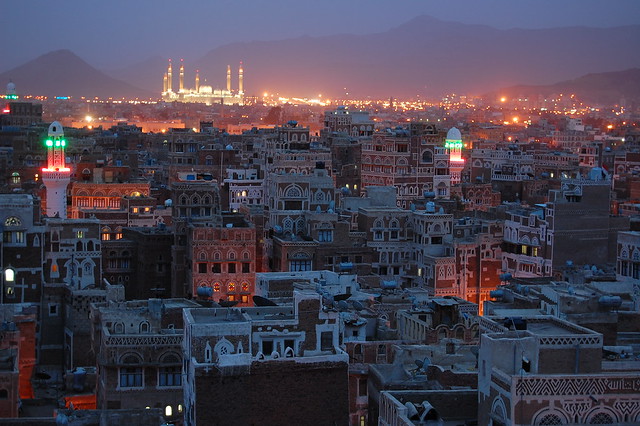 Photo by Louis/FlickrIn the spring of 2015, the national power grid, which was then providing Yemen’s captial city of Sanaa with just a few hours of electricity each day — and sometimes just a few hours a week — shut down.

When the so-called Arabic Coalition launched its airstrikes on Sanaa in the spring of 2015, the national power grid, which was then providing the city with just a few hours of electricity each day – and sometimes just a few hours a week – shut down. People who relied on the public, albeit unreliable, power-grid were left in the dark. Moreover, residents who used private gasoline or diesel-run generators as a supplement for power shortages were no luckier after the price of fuel soared.

As a result, solar energy became a measure of last resort.

Today, almost every neighborhood in the capital city has several solar-installation and related businesses – sometimes outnumbering barbershops and markets. In my neighborhood, for instance, there are more than five solar businesses within 200 meters from my home. Some of them are home-appliance stores that now sell solar units and energy-efficient appliances.

According to Small and Micro Enterprise Promotion Service (SMEPS), a Yemeni development agency that has been tracking the solar industry, sales of solar panels have increased by over 2,000 percent in the past year.

Even before the war erupted and shut down the power grid, blackouts were a frequent problem in Sanaa, which has an aging electricity grid.

When the price of gasoline and diesel skyrocketed at the outbreak of the war, people recognized that their portable generators would no longer be an affordable supplement or substitute for electricity. Installing a medium-sized solar power system – comprising about two 150-watt panels and a 1,000 to 1,500-watt inverter – costs less than $500 and has actually proved to be less expensive than buying fuel for a generator.

Running a generator for two hours often cost more than a 150-watt solar panel, which costs around $100. (The price of 5 gallons of gasoline spiked to around $100 for several months in the past year, though it has decreased gradually since then). Tariq Al-sabili, a homeowner with a generator, said he doesn’t use his anymore.

Photo courtesy of Su-Kam SolarA solar panel on a rooftop in Sanaa. Sales of solar panels in the city have increased by over 2,000 percent in the past year.

Now, even as fuel prices have started to fall, generators are declining in popularity. Tariq said he might use the generator again, but for limited purposes, such as pumping water upstairs. Wahb Alshojaifi, a salesperson at a department store said his store doesn’t use a generator at all after installing solar panels on the roof of the store.

Khaled Almuradi, a salesperson at a larger department store said that his store used the generator only “before the two big holidays”, because ahead of those festival days their store remains open until after midnight. Businesses that use heavy machinery, however, have returned to using generators after fuel prices fell dramatically last month.

The installation of solar energy systems across the city was not the only environmental benefit to war-torn Yemen. The limitations of these budget-friendly systems had their own multiplier effect. For example, residents have replaced older televisions with more energy efficient models, such as LED TVs. Most households used to have higher energy consumption TVs because it didn’t make much of a difference in their power bill. But the use of electronics makes a big difference in how long a solar-powered battery lasts.

Also, light bulbs have been replaced by LEDs. Al-sabili also said that he changed all the light bulbs at his home, just like many other people did. Some have upgraded older home appliances as well, which can cost less than installing a bigger solar power system to cater to those energy-gobbling machines. In other words, environmentally friendly appliances in Sanaa now are saving not only energy but money too.

I asked Amran Alamrani, an owner of a Sanaa-based appliance and solar energy store, “What is the most frequently asked question from your customers?” He said most people want to know how many watts of energy an appliance will use. In general, Amran said, the energy crisis had made customers much more aware of their energy consumption. Amran purchases only power-efficient products because they are the only ones that customers seem to want these days. Although there are no environmental standards in place, Yemeni businesses are importing only energy-efficient appliances. The consumers, not the powers that be, are leading this pro-environmental push in the city.

The substantial reduction in portable gasoline- and diesel-powered generator use has not only decreased air pollution in the city, but noise pollution as well. The capital has a reputation for being very noisy at night because of the cacophony of generators that pervade nearly every neighborhood.

Solar energy has improved quality of sleep and the quality of life in general – you might say it’s both a clean and calming resource. Under normal circumstances, it would have taken years, even decades, to convince the citizens of Sanaa that switching to solar was not just better for the environment, but saves money as well. But the ongoing conflict seems to have helped push the switch through in a matter of months. Unfortunately, the severe humanitarian crisis that has brought about this change, makes it impossible to celebrate it as an environmental success story.