Can Trophy Hunting Save the Endangered Markhor Goats?

A controversial program in Tajikistan tests the idea
Robynne Boyd

The sun was beginning to fade in the frigid evening sky. It was the end of a long day of counting the endangered wild goats of southern Tajikistan. Known as the markhor, these goats are distinguished by their Merlin-esque beards and twisting, towering horns. The rare goats are difficult to spot amid the crags and gulches of the Pamir Mountains, but conservationist Tanya Rosen Michel’s is practiced at the art, and she eventually honed in on them. 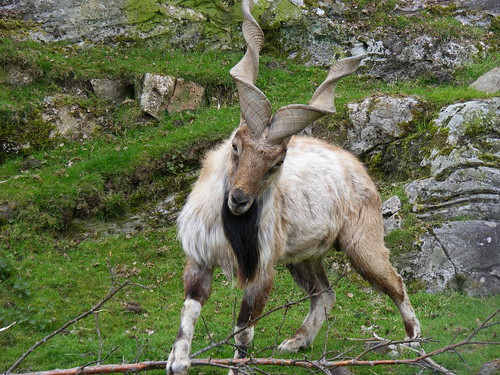 Photo by Marie HalelSome conservationists believe that protecting the snow leopard and its prey, the Turkmenian marcher goat would require some form of hunting.

Michel is the snow leopard program coordinator for Panthera, a wildcat conservation group that was surveying the markhor with help from the Tajik Committee on Environmental Protection, the Forest Agency and Academy of Sciences, and the German Development and Cooperation Agency. The March survey was an effort to understand how the markhor population affects those of its primary predator, the equally endangered snow leopard.

The tally this year totaled 1,300 markhor – the highest count in more than two decades. In the 1990s, the population plummeted to a tenuous 350 animal due to a civil war that devastated livestock and fueled poaching. After the war, as normal food sources rebounded and local conservation efforts were enacted to protect the markhor, their numbers began to rise. So, too, did snow leopard sightings.

As Michel peered through her scope, she noticed the herd, which had been casually grazing on grass, tapping the cold ground feverishly and crowding together. Scanning the landscape, Rosen spotted the source of distress – a snow leopard tiptoeing towards the heard in hopes of meal. For almost half an hour the snow leopard attempted stealing upon the herd from different angles. It then lay down behind a juniper tree in hopes of calming the herd, which sensed the predator’s presence. Without success, “the ghost of the mountains,” turned tail and faded into the fog.

It is clear to Michel and her colleagues that the fate of these two animals is intimately linked. Snow leopards cannot thrive without the markhor – and the markor cannot thrive without a concerted human effort at conservation. Michel also realized that it was going to take a sizeable, and perhaps counterintuitive effort, to defend both species. To protect the snow leopard and its prey would likely involve some form of hunting.

Davlatkhon Mulloyorov, a traditional hunter from the small Tajik village of Zighar, is one of the many people helping the markhor conservation effort. Inspired by Pakistan’s trophy hunting program, which auctions off a limited number of markhor hunting permits each year (four for the 2013-14 season) for hefty sums (US$60,000), Mulloyorov began talking to people in his family and village about the negative impact poaching was having on the markhor. Mulloyorov also began patrolling the habitat, and enlisting others to do the same.

In Pakistan, big game hunting is illegal, except for the trophy hunting exceptions overseen by the National Council for the Conservation of Wildlife. Eighty percent of the hunting fee goes to the community where the hunt takes place. The remaining 20 percent covers administration costs. Mulloyorov hoped that a similar program could happen in Tajikistan.

Last fall it did. The Tajik government issued a quota of six markhor permits, each costing US$41,000. Five sold. As with Pakistan, a percentage of the fee is supposed to go toward conservation of the markhor and improving livelihoods of communities across the markhor range. 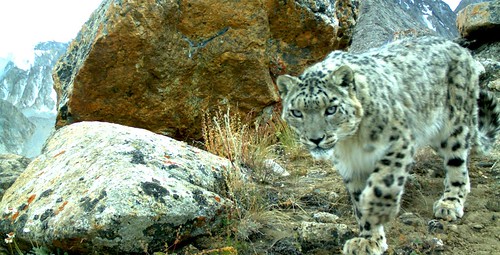 It’s a controversial and difficult program to enact. “We believe that killing in the name of conservation is simply unacceptable,” Naseem Amini , a spokesperson at the Humane Society of the United States, emailed. “It does not benefit the species, it only provides profit to hunting safari companies and a grotesque trophy for a wealthy hunter. Conversely, promoting the killing of wildlife for sport, especially threatened and endangered species undermines conservation efforts that are so desperately needed to save the dwindling numbers of these animals.”

Certainly, creating legal sources of income for rare and threatened species, including their parts, could make poaching more alluring. The hope, however, is that such loopholes can be closed.

This is not yet the case in Tajikistan, where corruption is prevalent and international oversight almost nil. Even so, one of the conservancies that hosted three of the hunts agreed to allocate 30 percent of its profits to community development.

Despite the hurdles, Michel strongly believes that trophy hunting of the markhor can play an important role in markhor and snow leopard conservation. One of the major obstacles to this, says Michel, is that Tajikistan not member of the Convention on International Trade in Endangered Species of Wild Fauna and Flora (CITES), an international treaty aimed at protecting wildlife from over exploitation and international trade when threatened.

In 1992, the markhor became an Appendix I (most endangered) species under CITES, basically ceasing legal trophy hunting by foreign hunters in member countries. However, CITES made an exception in Pakistan due to the country’s interest in creating community-based hunting programs, which are thriving today.

Michel says that ratification of this convention would make it easier for the international community to support efforts to curb illegal trophy hunting of CITES-listed species in the country, as well as contribute to shaping and supporting community-based wildlife management and sound sustainable use initiatives in Tajikistan.

“We hope it will stimulate conservation efforts across the entire markhor range in Tajikistan,” she said. “We hope it inspires similar efforts across the border in Afghanistan where there are very few markhor left at the moment. Above all we hope that profits from the sale of the permits and the hunts truly improve the livelihoods of local people in this region. Because if the local people don’t see those benefits, all efforts will be in vain.”