New biking trails have opened up areas of stunning natural beauty to visitors, but at what cost?
Bevan Chignell

If the wilderness areas, the national parks, and the forest reserves can make a profit, then conservation will pay for itself—surely the logic is irrefutable. The US National Park Service DirectorJonathon Jarvis is recorded as saying: “The paradigm of allowing nature to rule the parks is no longer viable.” If this is true, then does the only alternative solution lie in allowing business models to govern wilderness areas? Photo by Richard Rossiter/used with permissionThe Old Ghost Road is a soon to be completed 80km bicycling trail through what was largely untouched native forest and wilderness in the South Island’s Mokihinui River basin.

Indeed, the idea that running wilderness areas along business lines is good for the environment is rapidly gaining currency worldwide. Certainly, New Zealand, with its clean, green image has embraced the holy grail of eco-tourism with both hands and feet. One of the latest New Zealand ventures into wilderness tourism, the Old Ghost Road Cycle trail, demonstrates perfectly how eco-tourism can ostensibly aid conservation efforts.

The Old Ghost Road is a soon to be completed 80km bicycling trail through what was largely untouched native forest and wilderness in the Mokihinui River basin on the northwest of New Zealand’s South Island. This area is home to many of New Zealand’s most endangered species including, kiwi, kaka, whio (blue ducks), giant land snails (Powelliphanta), weta, and other endangered invertebrates and frogs. Formerly, human interaction and impact in the area was minimal. The scars of nineteenth century gold prospecting in the area have largely healed. The wild terrain enabled the few visitors to have a true wilderness experience and the endangered fauna were largely left in peace, at least from direct human interference.

In the twenty-first century the sanctity of this extensive wilderness area was once more endangered, this time thanks to plans to create a 14 km long hydroelectric dam on the Mokihinui River. A joint campaign brought together the Department of Conservation, the NZ Forest and Bird Society and numerous mountain biking, rafting and community interests who worked together to save the area from eternal damnation. Not only did they save the forest but their campaign brought new life and hope to an embattled community.

Yes, humans also are under threat in this part of the world. The economy on the West Coast has suffered a series of crippling blows in recent years. One of the region’s major employers, the coal mining company, Solid Energy, shed some 300 jobs in the past year and is going to declare bankruptcy. Another major employer, the Holcim Cement Company, faces imminent closure with the loss of 120 jobs, and a nearby goldmine too, is set to close with the loss of more than 100 jobs. These job losses come close on the heels of the Pike River Mine disaster, which killed 29 miners in 2010, just another nail in the coffin for the largest town, Westport– population: 3,900.

The success of the “Save the Mokihinui” campaign revolved largely around raising public awareness and generating interest in this hitherto forgotten area. A pivotal part of increasing that public awareness lay in making the formerly inaccessible wilderness area easily accessible.

The new bicycle trail, along with the installation of fine huts has indeed made the area accessible and has opened up this area of stunning natural beauty to visitors who would otherwise be unable or unwilling to visit. A growing number of tourism ventures such as heli-mountain biking, rafting, and kayaking companies are able to make the most of the new attraction, flying clients in to the heart of the former wilderness and bringing tourist dollars to the struggling West Coast community. 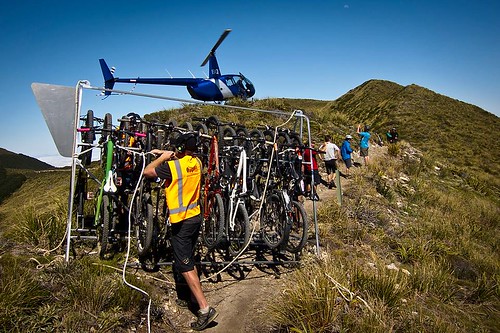 Photo by Richard Rossiter/used with permission One of the problems with increasing human interaction in wilderness areas is the indirect impact on wildlife.

“Completing the last few kilometers … of the trail will deliver a high-quality tourism asset and attract more visitors, create jobs, and boost economic growth in the region,” New Zealand’s Minister of Conservation, Maggie Barry said in a July statement announcing more government funding for the project.

Another one of New Zealand’s great walks/cycle rides, the nearby Heaphy Track, has seen visitor numbers treble over the last four years thanks to track and hut upgrades and tourism promotion efforts.

Yes, these new trails mean the region gets an economic boost and this helps preserve the environment for future generations. Everyone thinks it’s a win-win situation. But is it? Examine the Minister’s words more closely. The words “conservation and preservation of the environment” are strangely absent from a statement by a minister responsible for the conservation of wilderness areas.

Yes, the Old Ghost Road trail has helped to save a wilderness area from outright destruction but can this area even be considered wilderness anymore? What value was given to the inhabitants of this wilderness area—the rapidly disappearing whio, the kiwi, and the kea? How many pieces of silver for the spiritual connection humanity needs to have with nature, with the “wild places to hold steady the sanity of our species”?

Is there another balance sheet that we need to consult to ascertain the true cost of the Old Ghost Trail?

Some of the greatest attractions in this area are the birds such as the outrageously cheeky kea — the world’s only mountain parrot, or the shy and almost invisible whio — one of only three fast-water ducks in the world, and not forgetting that icon, the kiwi. All of these birds are rapidly declining in number. There are probably only 1,000 kea and 2,000 whio remaining in New Zealand, and the kiwi have suffered a 43 percent decline in number over the past 45 years.

Unfortunately, there is little current research on the effect that eco-tourism has on bird populations. A 1999 review of the literature on human impacts on bird colonies published in the The International Journal of Waterbirds noted that “most studies found significant negative effects…” particularly relating to the disturbance of nesting/ breeding cycles. As early as 1995, Eugenie Sage, former researcher with the NZ Forest and Bird Society and current Green Party spokesperson for the Environment, warned that there is cause for concern over the impacts of eco-tourism. We do know that fast movements such as those of noisy cyclists and runners result in some of the greatest negative impacts on nesting birds.

One of the problems with increasing human interaction in wilderness areas is the indirect impact on wildlife. Greater ease of access leads inevitably to greater numbers of people and a correspondingly larger number of dogs in the area. According to a Department of Conservation survey, dogs accounted for some 70-78 percent of kiwi deaths over a five-year period. Although this survey focused on a different location, the results appear to be sadly consistent throughout New Zealand to this day.

Increased visitor numbers bring other impacts too, such as didymo, the invasive weed that limits the food supply and the fast-flowing clean water, the whio need to survive. Didymo was unknown in New Zealand 10 years ago. Its arrival and rapid spread throughout the South Island has been linked to increasing visitor numbers, especially from overseas.

The National Institute of Water and Atmospheric Research confirms this.“In an age of increasing tourism and air travel, the transfer of [didymo] cells to remote locations like the South Island – which also happened to have rivers with perfect conditions for blooms – was almost inevitable,” it says in a 2014 report. The proliferation of didymo in South Island waterways has completely devastated the ecosystem in many New Zealand rivers.

New research published just last week says ecotourism, no matter how well intentioned, can be harmful to animals, whose behaviors may be altered in ways that put them at risk.

Sadly, we do not know ultimately what price the native inhabitants, the birds, the insects, the fauna and flora of New Zealand will pay for our entertainment, our desire to have free and easy access to the wild places.

Lastly, there is that virtually extinct species: silence and solitude—that place where humans can find themselves again. Where does the human species learn to cherish silence if the remaining wilderness areas are overrun with visitors and fast-moving, noisy cyclists? How can we experience a deeper connection with nature in an environment that is delineated by boardwalks and tracks cut by bulldozer?

If, as Roger Kaye suggests in his Earth Island Journal essay “Guardians not Gardeners”: “Wildness, then, is not synonymous with pristine or virgin. Rather, it is the state wherein evolutionary processes – free from human purpose, utility, or design – are allowed to shape a landscape’s future, ” then do human ideas of financial gain have a part in preserving those wild areas? Does eco-tourism have a role to play or is it simply a cunningly disguised form of profiteering? Can the wilderness survive eco-tourism? We may praise ourselves and pretend that we are letting the environment evolve in its own way. But when only the ghosts of the Blue ducks, the Kiwi, and the Kea remain, I for one, will mourn their passing and the loss of one more wilderness area.

In Big Win for Wildlife, California Curbs Use of Dangerous Rat Poisons

After 12 Years, We Finally Got a Climate Question at the Debate. Glory Be!

Sadly, the bar for any discussion one can expect on the climate crisis on the national stage is pretty low. And it showed.

Designation can help open a dialogue about how our relationship with the environment must evolve in the light of climate change, says Ohlone leader Corrina Gould.