New Orleans revelry celebrates culture, but at a cost to the environment
Carolyn Heneghan

It’s Carnival time in New Orleans. For the past week and a half, locals and visitors alike have been celebrating one of New Orleans’ most famous historical and cultural traditions. Today, the revelry culminates in Mardi Gras, and up and down the streets of New Orleans, hundreds of thousands of people are gathered together enjoying food and drinks, and watching the parades roll by. 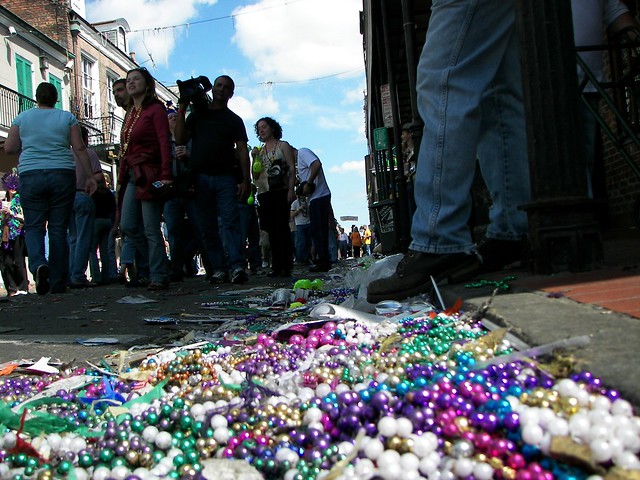 Green may be one of the three prominent colors of the Mardi Gras spectrum, but the event is anything but. It produces millions of pounds of trash each year, the majority of which ends up in landfills. In 2014, the City collected 1,758 tons of trash during the 10 days of Carnival, spending nearly $1.5 million on sanitation.

Though the City distributes between 50 and 100 extra trash bins along the major parade routes for the festivities, much of the litter still ends up on the ground and it falls upon the City and contracted companies to make the streets look clean again. Currently, the City doesn’t attempt to place recycling bins along the parade routes because of attendees’ general resistance to recycling. Pilots for recycling programs have been too small to have a noticeable effect on sanitation costs, according to the City.

What people often forget about when they see the streets shiny and new again on Ash Wednesday is where those tons of trash end up — in a landfill. If people recycled their plastic and glass bottles, aluminum cans and other recyclable containers instead of tossing them in the trash or on the street, Mardi Gras-related waste could be significantly reduced.

The Rise of Mardi Gras Beads

While catching and throwing beads, doubloons, stuffed animals and other trinkets during Mardi Gras parades may be exhilarating, many of these throws end up polluting the city as they are dropped and long forgotten once the parade is over. But the biggest offender when it comes to litter? Mardi Gras beads.

The Mardi Gras beads tradition began innocently enough. While the earliest of Mardi Gras parades didn’t have throws at all, by the 1950s, strings of glass beads imported from Czechoslovakia became a staple throw for the Rex parade, one of the earliest parades in New Orleans’ Mardi Gras history, and then expanded. But the high costs of these beads eventually overran their utility. New Orleans’ bead market then turned to Japan, which produced the cheaper “bugle bead,” created using tubes of glass.

Up until that time, glass beads were treasured commodities. But that would soon change when Bacchus and Endymion, two of the biggest Mardi Gras krewes — groups of people who join together to celebrate Mardi Gras via a ball, parade and social events — required mass quantities of beads for their parades, and needed a cheaper alternative. Eventually the bead market turned to plastic and moved to China, which now produces nearly all of today’s Mardi Gras beads, and it is now a multi-million dollar industry.

Eco-conscious Mardi Gras organization Verdi Gras estimates that, for the largest krewes, on every block about $56,000 worth of throws end up in the hands of revelers or on the ground after each parade. These abandoned throws mainly consist of beads. Approximately 25 million pounds of beads are imported to New Orleans every year, and less than 2 percent are recycled.

Beads are non-biodegradable and made from oil in a process that is highly polluting and toxic to both the environment and Chinese workers. The shinier the coating, the worse the beads may be, and the green, round bead necklaces have the highest lead content, according to the Verdi Gras study.

Many beads contain lead, and about two-thirds of the beads tested in a study conducted by the Ecology Center, an environmental education nonprofit based in Berkeley, California, exceeded the federal safety limit for lead for children’s products, which is 100 parts per million. They also contain cadmium and other toxic heavy chemicals like phthalate plasticizers, which are outlawed in California, mercury, arsenic, brominated and chlorinated flame-retardants, and no. 6 polystyrene, which contains hydrofluorocarbons. Some of these chemicals come from chunks of recycled electronics used to make the beads.

The Ecology Center estimates that in a single year, the total inventory of Mardi Gras beads may contain up to 900,000 pounds of hazardous flame retardants and 10,000 pounds of lead.

These chemicals have been linked to many health problems in humans, including cancer, birth defects, asthma, learning disabilities, reproductive problems and liver toxicity in humans. The Verdi Gras study found that most beads contained one or more of these hazardous chemicals.

These chemicals also damage the environment. Lead and phthalates, which are petroleum by-products, are particularly harmful, as they can seep into the water table, polluting groundwater, killing plants, and working their way into the food chain.

Due to their popularity, Mardi Gras beads aren’t going anywhere any time soon. But not all hope is lost. Many businesses and organizations in New Orleans are beginning to see beads in a new light. For example, Verdi Gras collects and recycles beads in coordination with Arc of Greater New Orleans, which repackages and sells the beads to benefit children affected by developmental disabilities. People can donate beads to Arc of Greater New Orleans during Mardi Gras via purple and gold bins placed along parade routes, as well as year-round via bins located throughout the city. Several other organizations, including St. Michael’s Special School and LifeCity, are also involved with bead recycling efforts.

Besides reusing the beads for more than one parade, some people find beauty in Mardi Gras beads and recycle them by using them in pieces of art. Perhaps most famously, German artist Stephan Wanger creates massive murals and other artwork using Mardi Gras beads as his chosen medium. He says that through art, Mardi Gras beads can live beyond their original purpose and contribute to something more.

Other organizations bypass traditional Mardi Gras beads altogether by creating and promoting eco-friendly and sustainable throws to replace a share of the cheap, plastic beads. These throws often have the added benefit of being sourced from New Orleans, cutting transportation costs and associated carbon footprints.

Zombeads, for example, uses repurposed and recycled materials to create paper beads and assorted throws like voodoo dolls and rice bags to sell to krewes. These throws are higher in quality and have less of an environmental impact. Another organization, I Heart Louisiana, makes its own eco-friendly, sustainable throws, such as magnets and necklaces, and works to connect local artists and individuals directly with the krewes to ensure the throws’ economy and production remains in New Orleans.

“One of the things we realized is we don’t have to replace every bead to succeed,” says Katrina Brees, Mardi Gras parade-maker and founder of the Greening the Gras Conference. “We have to offer a product selection that people enjoy and buy.”

These organizations hope that larger krewes will catch on to the eco-friendly and sustainable throws trend soon. But for now, it has been the smaller, lesser-known krewes that have more readily adopted these newer options.

Mardi Gras is one high-profile example of how much trash can be created at a single event, but it is by no means the only instance. From similar parades and festivals held throughout the world, to major sporting events like the Super Bowl and Olympics, any large-scale event can have a tremendous impact on the environment. As efforts increase to green these large-scale events, hopefully someday revelers will leave the environment better than it was when the party started.