Can A Drive-Thru Really Be Green?

There’s a rainwater catchment system on the roof of my west Florida neighborhood’s Dunkin’ Donuts outlet, collecting water to irrigate the restaurant’s own landscaping. There are electric car charging stations, for those Tesla owners who aren’t afraid to get a little powdered sugar on the upholstery. There is carpool-preferred parking, which is really available to anyone but might at least make single-car drivers feel a little guilty for parking there. The building features reflective and permeable hardscapes, to minimize the heat island effect and to help recharge the aquifer after a rainstorm. There is efficient LED lighting, and low- or no-flow fixtures in restrooms and kitchen sinks. The whole place was built with recycled materials. The works. 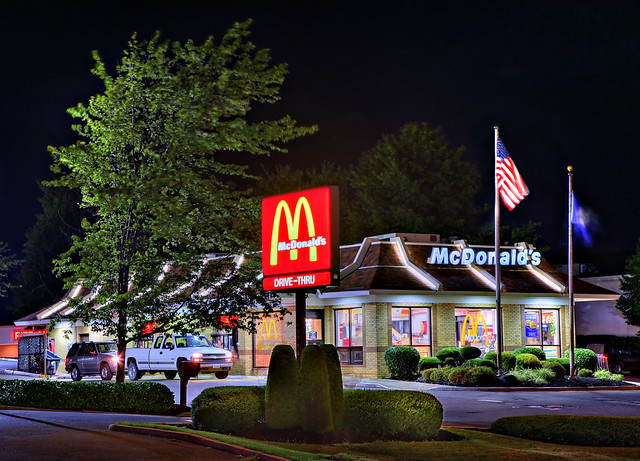 Photo by Skip SteuartCars idle while waiting at a McDonald’s drive-thru in Virginia.

Now, I haven’t yet seen an electric car parked in front of one of the charging stations, but the water-saving features and the reflective, permeable hardscapes are particularly appropriate in urban Florida, where decades of aggressive population growth has put tremendous strain on our water resources, and where acres of blacktopped parking lots make already-challenging summers nearly unbearable.

You don’t see a lot of fast food restaurants like this, especially here in the Sunshine State. Scratch that — you don’t see many buildings like this here, period. As you might expect, the owners of this particular store are pursuing LEED certification. It’s the second Dunkin’ Donuts outlet in my city to be constructed using green building materials and methods.

But despite these efforts, the building is fundamentally at odds with concepts like sustainability and smaller carbon footprints and a cleaner environment generally. That’s because the building’s design includes a drive-thru window, which means it’s specifically designed to attract and accommodate lines of idling cars spewing toxins and greenhouse gases into the air. Which seems like a strange thing for a green building to do.

How long do drivers sit in the drive-thru, drumming their fingers on the steering wheel, waiting for their toasted bagels with cream cheese and their iced coffees? The industry average wait time is three minutes per car, from order to pickup. That translates to nearly 20 grams of pollutants emitted per car, on average, per visit — about the same as driving for a mile and a half. Note that this figure doesn’t include time spent idling before ordering, which actually happens a lot.

Given all that, how is it then possible to exclude tailpipe emissions from any useful understanding of what it means to be a “green” building?

It isn’t. Still, a builder can get credits toward LEED certification for reducing the building’s parking footprint (which, paradoxically, could act to increase the attractiveness of the drive-thru at times when the store is busy), as well as for access to public transit options, bicycle parking, and accommodations for green vehicles — all of which my neighborhood Dunkin’ Donuts outlet has. But there’s no mechanism that would subtract credits for actively encouraging customers to waste fuel and dump toxins and greenhouse gases into the atmosphere.

In a way, this almost makes sense — if LEED certification is meant to be a reflection of the sustainable practices followed during the construction process only. The building itself is “green” because that’s how it was built, even if the overall environmental impact of the way people use the facility is a negative one.

But if a green building is being used in an anti-green way, then is it really still a green building? Do the benefits of green building techniques outweigh the cost of idling car emissions? To be honest, I don’t know. But I think it’s beside the point. Instead, the real issue is one of language, of perception and expectation, of framing: It’s become too common to use LEED certification as a proxy for green-ness.

Allowing drive-thrus to market themselves as “green” simply because they were built a certain way, or with certain materials, and with no regard for the additional car-generated pollution they are directly responsible for, is a step toward re-defining the entire concept of sustainability in a manner that renders it almost completely meaningless. This drive-thru is sustainable in every way except the one that matters most — greenhouse gas emissions. By ignoring that fact — and by ignoring the hard choices we will have to make as a society to actually do anything about it — its green certification becomes less a badge of ecological sustainability and more a matter of design aesthetic or lifestyle choice, both of which are much easier for skeptics and opponents to dismiss. And then, when use of green building techniques fails to hold back rising sea levels, it’ll be all the easier to declare environmentalism dead, a failure, a pipe dream. “We’ve tried that,” they could say. “And it hasn’t changed anything.”

Most likely, this is a simple oversight in the original development of LEED standards, an unintended loophole that could be easily closed. But leaving the certification criteria the way it is now is certainly in the interest of the owners of this particular Dunkin’ Donuts, and of the US Green Building Council, which can then convince aspirants to order copies of their reference guides at $249 a pop. And it’s in the interest of anyone who wants to neuter the impact of the green movement in the US.

I don’t really want to single out Dunkin’ Donuts for criticism here, because they’re not the only company to build a brand-new drive-thru and call it green. Both Starbucks and Canadian coffee-and-pastry-purveyor Tim Horton’s have done the same thing in recent years. What I want to point out is the worrisome fact that this seems to be becoming an increasingly common PR tactic. Because the more companies that see this as an effective approach, the more people will eventually come to accept, without a second thought, the idea that it’s perfectly logical for a green building to encourage fundamentally anti-green behavior. And the more quickly the idea of sustainability will be reduced to just another a marketing buzzword.