As Brazil's São Paulo taps out its water reserves, questions linger about how much the state's water utility distributes to sugarcane for ethanol production
Aaron Miguel Cantú

By now, most are aware of California’s unprecedented mandatory water restrictions, which Governor Brown ordered earlier this month. Many also know that these limits apply exclusively to urban water agencies, even though cities use only about 20 percent of California’s total surface water reservoirs. California farms, on the other hand, use 80 percent of the state’s surface water. While Governor Jerry Brown has defended this allocation for economic reasons, critics note that agriculture only accounts for 2 percent of the state’s GDP. Regardless, the power of the agriculture lobby may ensure that pressures to cut back on water use will be shouldered by ordinary citizens living in Los Angeles, San Francisco, and other growing cities across the state. 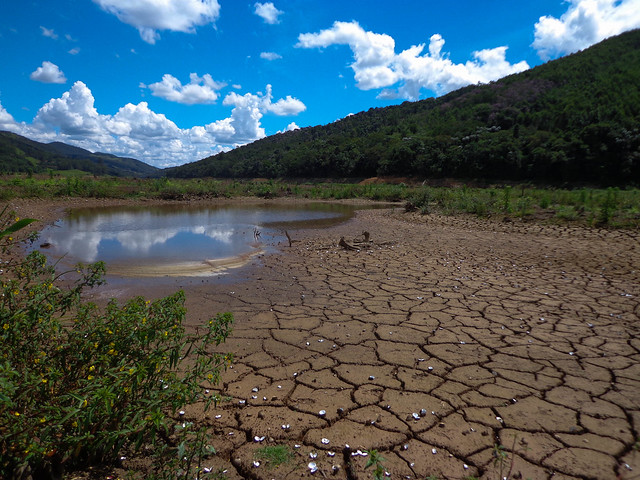 Photo by ClairexA dry branch of the Atibainha reservoir, which is part of São Paulo’s Cantareira system of reservoirs. Last year, the Cantareira reservoir was hit especially hard by drought, compounding management problems.

The water pains in the world’s seventh largest economy are also being felt within the eighth: Brazil. The nation’s most populous city, São Paulo, officially tapped out its supply of water on March 15, leaving millions with water access at only irregular hours, and millions of favela dwellers with even less access to water. The Guardian reported of neighbors fighting over measly remaining water reserves, and of armed groups looting emergency water trucks; NPR says people are drilling guerrilla wells across the city, potentially contaminating underground aquifers.

Last year, two of the main reserve systems that supply the city with water, the Cantareira and the Alto Tietê, were hit especially hard by drought, which the governor of São Paulo state has blamed for current water shortages. However, a UN report shows that reserve volume had already been declining for the past five years, meaning that the drought simply compounded management problems. The report cites mismanagement and poor preparation by the state government and its semi-public water utility, SabeSP, which distributes and purifies water in the region.

This has raised questions over how SabeSP distributes water between urban areas like São Paulo city and surrounding agricultural land. Like California, much of the available surface water in São Paulo state is directed toward agriculture (45 percent) or industry (14 percent). A further 36 percent is completely lost to leaking pipes, leaving only 5 percent for domestic consumption.

“With more than 80 percent of the water that is consumed worldwide being used in agriculture, it is apparent that this is where the main problem of water scarcity manifests,” writes water expert Roger Patrick in a study published by American Water Works this past March. In particular, Patrick cites the rise of biofuels, especially ethanol, as a major global factor contributing to water scarcity. Ethanol can be made from corn and sugarcane; 50 percent of sugarcane grown in Brazil is used for ethanol production. According to Patricia Guardabassi, a Harvard-educated researcher at the Instituto Acende Brasil based in São Paulo city, the sugarcane sector comprises 44 percent of São Paulo state’s agribusiness economy, and São Paulo state’s agribusiness economy represents 12 percent of the Brazil’s total agriculture income — or 44 billion dollars in 2014.

Brazil’s reputation as a sugarcane powerhouse is important for its standing in the global economy, especially considering that worldwide consumption of ethanol grew substantially over the last 15 years. Brazil is the second largest producer and exporter of ethanol in the world, after the United States, and before São Paulo’s epic drought the nation was even a net exporter of ethanol to the United States. And while São Paulo state’s drought has affected sugarcane production — Guadabassi says there was a 4.23 percent decrease in sugarcane agriculture production for the 2014/2015 harvesting season in Brazil’s Center-South Region, which includes São Paulo state — new biofuel standards the EPA is mulling over may give even more preference to Brazilian sugarcane-based ethanol. (Brazil’s sugarcane lobby worries they will do the opposite.)

What does all of this have to do with water in São Paulo city? Sugarcane is a water intensive crop, and though sugarcane farmers were able to rely mostly on rain water in previous years, São Paulo state’s drought is increasing farmers’ reliance on irrigation, possibly sapping water from reserves that supply the city with clean, potable water. The World Wildlife Fund cites sugarcane as among the world’s thirstiest crops, along with cotton, rice, and wheat. And ethanol production in Brazil is slated to double significantly in the future, from 25 billion liters in 2013 to 50 billion in 2023, according to a 2014 UN report.

The extent to which SadeSP water utility directs potential drinking water to irrigation for sugarcane and other crops in São Paulo state is unknown. Agência Pública, an investigative news agency funded by the Brazilian government, requested business contracts between SabeSP and major agricultural companies in the state, but was rebuffed. One Brazilian researcher, Bernando Friedrich Rudorff of the National Institute for Space Research, told Earth Island Journal that sugarcane in the state of São Paulo is currently only subject to “minor irrigation.”

But if the “new normal” of the world includes prolonged droughts likely induced by global warming (and for Brazil, by deforestation of the Amazon), it’s anyone’s guess what SabeSP and the Brazilian government will do in order to hit those 50 billion liters. Industry leaders speak of improving the efficiency of irrigation techniques in the future, but water woes are already being felt right now.

Assessing the future of the world’s water supply, Roger Patrick concludes that unless we quickly reverse certain water trends, “the future is indeed bleak for a large percentage of the world’s population, and countries including the United States will increasingly be reacting to emergencies and conflicts.” To extend this thought: As long as the dominant narrative in the water wars continues to pressure ordinary citizens’ to curtail water use over behemoth agricultural corporations, it will be the poorest and least powerful people of the world who bear the brunt of ongoing hydracollapse.