In a win for environmental and public health advocates, a California court has halted a program that allows the state agriculture department to spray pesticides on public and private property without proper notice to the public about its intention to spray or adequate study of the possible adverse impacts of the chemicals used. 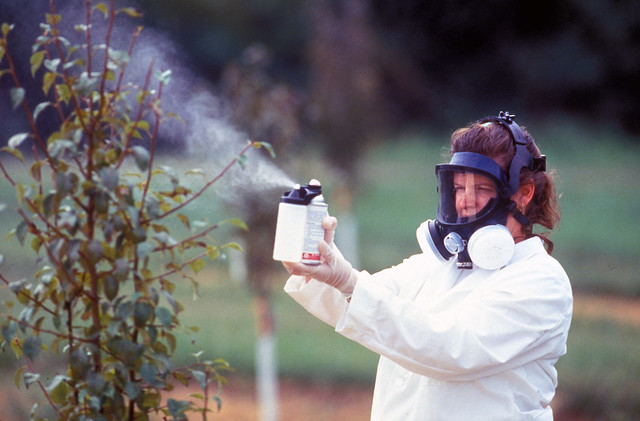 Photo by US Department of Agriculture / Keith Weller Prior to a court order issued last week, the California agricultural department was permitted to spray 79 pesticides anywhere in the state, including schools groups, public parks, and private backyards.

The court order, which came late last week, was in response to a lawsuit brought by 11 environmental and public health groups — including the Environmental Working Group, Center for Food Safety, Pesticide Action Network North America, Center for Biological Diversity, and Moms Advocating Sustainability — and the city of Berkeley.

The California Department of Food and Agriculture’s (CDFA) Plant Pest Prevention and Management Program, which is supposed to control outbreaks of invasive plant pests, gave the agency the license to use 79 pesticides — including some known to cause cancer and birth defects and to be highly toxic to bees, butterflies, and other wildlife — anywhere it the state. The “anywhere” included school grounds, public parks, near organic farms, and even in private backyards.

The agriculture department uses the program to control pests such as the Asian citrus psyllid, which can infect citrus trees with a bacteria that has been wreaking havoc on citrus farms in Florida. Since the program was adopted in 2014, the agency has carried out more than 1,000 treatments across the state, sparying pesticides such as chlorpyrifos, neonicotinoids, methyl bromide, and chloropicrin, which are known for their toxicity.

The lawsuit sought to halt the program citing “far-reaching flaws in the state’s analysis of the environmental harm” caused by the use of these pesticides, and the agriculture department’s decades-long history of avoiding talking about the public health and environmental risks of the pesticides it uses by repeatedly granting itself emergency exemptions from environmental laws.

Environmental and public health activists have for years been trying to persuade the agency to shift to less toxic pest control alternatives to no avail. “The lawsuit was born out of concerns about flagrant pesticide spraying, rather than sensible pesticide policy,” says Paul Towers, spokesperson for Pesticide Action Network North America. “State officials attempted to write themselves a blank check for 30 years to use harmful pesticides wherever they wanted.”

In his January ruling, Judge Frawley said the agriculture department had been relying on “unsupported assumptions and speculation” to conclude that pesticides would not contaminate water bodies. The ruling cited the state’s “woefully deficient” analysis of the cumulative danger of increasing the more than 150 million pounds of pesticides already used in California each year.

The ruling halts the program until the state develops a system to give adequate public notice of its pesticide use activities and offer citizens more opportunities to comment on them. “The judge’s ruling requires the department to adopt a tailored review and provide tailored solutions to each pest problem,” Towers adds.

The agriculture department issued a brief statement on Monday saying it might appeal the ruling.

“The decision in EWG Plaintiffs vs. CDFA compels the state agriculture agency to reformulate its pesticide policies to restore the balance, as California law requires,” Environmental Working Group President Ken Cook, a resident of Marin County, said in a statement. “For too long the state’s own widespread pesticide spraying has been driven by agribusiness demands, without adequate consideration of the impacts on human health and the environment.”

EWG also pointed out that California’s agriculture department has a long history of working to downplay the risks pesticides pose to human health. In 2010, the agency gave a $180,000 grant to a chemical agriculture front group, the Alliance for Food and Farming, to attack EWG’s Shopper’s Guide to Pesticides in Produce.