Building Islands and Burying Reefs in the South China Sea

Island-building isn’t new. San Francisco built Treasure Island in the 1930s for the Golden Gate International Exposition. Miami’s exclusive Star Island was constructed by the Army Corps of Engineers back in the 1920s. And of course there are more recent examples, such as Dubai’s infamous Palm Islands. 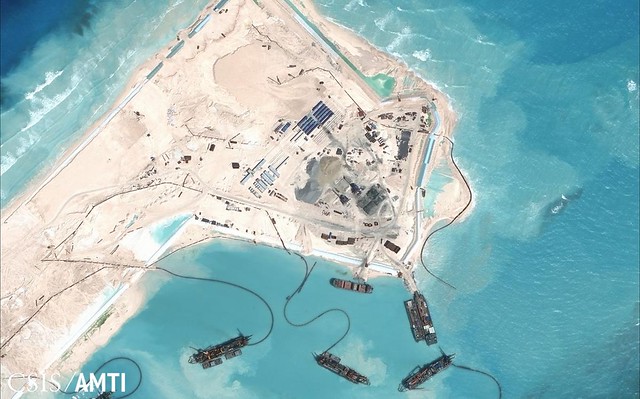 Photo courtesy of Asia Maritime Transparncy InitiativeChinese development at the newly reclaimed Fiery Cross Reef, which lies on the west side of Spratly Island. China’s island-building boom is widely seen as an attempt to tighten its control over the South China Sea.

Now, China is fervently adding to that list at an unprecedented rate. For the past 18-plus months, China has been “reclaiming land” in the Spratly Islands, an island chain that consists of more than 200 identified reefs, atolls, islands, and islets in the South China Sea. A half-dozen nations make territorial claims over the strategically important area, and China’s island-building boom is widely seen as an attempt to tighten its control over the South China Sea. So far, China has completed the construction of five islands and continues work on two more.

So, what does it take to construct an island chain in the middle of the ocean? It involves massive dredging of sand and corals, dumping sand on top of submerged and partially submerged reefs, and constructing giant concrete seawalls to protect manmade structures. China is topping its fully “reclaimed” islands with helipads, airstrips, military support buildings, solar installations, wind turbines, concrete plants, and radar towers, while also adding on harbors, piers, and desalination pumps.
In other words, China is burying reefs under sand and concrete. This would be troubling in any context, but it’s especially worrisome in the Spratly Islands. The reefs there happen to represent one of the most ecologically significant marine environments in the world, providing habitat for diverse marine life, including endangered species and larvae of heavily depleted fisheries in the South China Sea.

Unsurprisingly, the ecological impacts of island-building in the region have been devastating. Accord to Dr. Edgardo Gomez, national scientist in the Philippines and a professor emeritus at the University of the Philippines, the immediate effects of the ocean filling activities are numerous, and include “the total destruction of productive coral reefs, seagrass beds, and other shallow marine ecosystems” as well as “the smothering of areas adjacent to the dredged and filled areas.”

It’s unlikely that the reefs will recover. “It’s like you have a forest,” says Gomez. “And somebody comes along and burns down the forest. Theoretically, the forest can regrow because the substrate is still there. However, in this case, the reef has been buried in concrete and sand…. To use the analogy of the forest, not only did somebody cut down the forest, but they built concrete on top of it. So that’s what’s happened to all of these reefs…. There is no way they can recover. They are permanently gone.”

Dr. John McManus, a professor of Marine Biology and Fisheries at the University of Miami who has spent decades studying the Pacific, points out that in addition to the actual reef burying, several other activities are similarly troublesome, especially dredging. China has dredged massive areas to provide sand for island-building activities and to create deep channels to facilitate boat access to and from the islands.

“Everywhere you look, sand is supporting life,” McManus explains. “Those ecosystems have been seriously disturbed. It could take many years to resettle them, and they’ve lost hundreds of years of development of sand. People don’t always think of sand as being that important to a reef, but a reef is actually mostly made of sand that fills in around dead corals.”

Climate change is also likely to compound the damage to the region. Even healthy reefs will have a hard time surviving the temperatures changes and sea level rise associated with warming global temperatures, and many of the Spratly reefs are no longer healthy. “The way things are going, it looks like unless the rate of sea level rise is curbed off, most reefs won’t be able to keep up,” McManus says. “The more you damage a reef, the less likely it is going to be able to keep up.”

The scale of China’s island-building activities is unprecedented for the region. Although several other countries — including Vietnam, Malaysia and the Philippines — have undertaken some land reclamation activities, Gomez says they have reclaimed less than 100 acres of land, combined, over the last several decades. In comparison, in May the US Department of Defense estimated that China has reclaimed more than 2,000 acres in the previous 18 months. This estimate does not include the acres and acres that have been impacted by dredging.

In public statements, China has been vague about the impetus for the project. “The construction activities on the Nansha (Spratly) Islands and reefs fall within the scope of China’s sovereignty, and are lawful, reasonable and justified,” the Chinese Foreign Ministry has repeated in several public statements. In a June 16 statement, the ministry added: “Apart from satisfying the need of necessary military defense, the main purpose of China’s construction activities is to meet various civilian demands and better perform China’s international obligations and responsibilities in areas such as maritime search and rescue, disaster prevention and mitigation, marine scientific research, meteorological observation, ecological environment conservation, navigation safety as well as fishery production service.”

The foreign ministry also states that the construction activities have not and will not “cause damage to the marine ecological system and environment in the South China Sea.”

In June, the foreign ministry indicated that ocean filling activities were nearly complete on some of the islands

Several years ago, before China’s intensive island-building began, McManus proposed the establishment of a Spratly Island peace park, based on the high biodiversity and ecological value of the islands and growing tensions in the region. Recently, he has amended this goal slightly. “Now we’re thinking maybe a simpler step is to just freeze [territorial] claims, freeze activities in support of claims, and set up some kind of a regional organization that will manage the fisheries and the environment,” he says. “And those three elements we think will go a long ways toward improving peace, incentivizing demilitarization, and making the place available for eco-friendly tourism, and that in itself, would reinforce the idea of protecting this area.”

Much of the damage to the seven impacted reefs may be permanent, but a freeze on ocean filling could go a long way to protecting the remainder of the Spratly atolls and islets.