The mass killing of gray wolves in British Columbia (BC) has ignited a bitter feud between Canadian government officials and conservationists. The government has insisted that the cull, which began in early 2015, is the only way to save the critically endangered mountain caribou, while wildlife advocates argue that wolves are merely being scapegoated for habitat loss in the region. In recent weeks, the battle has heated up with the release of audio clips of a recorded interview with a retired wildlife patrol guide who outlines the controversial methods used in the culls. 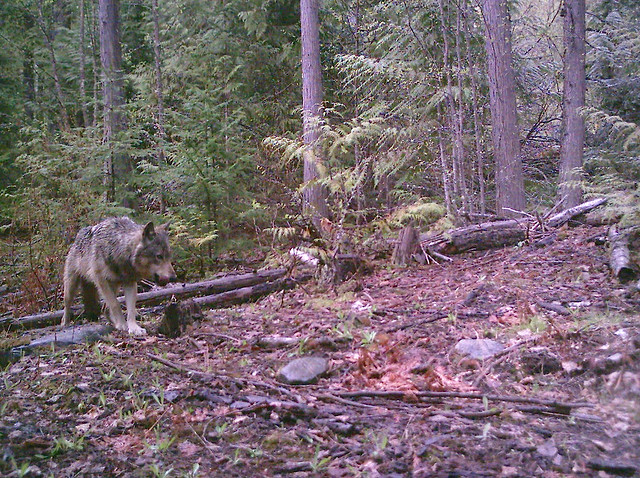 In the interview, released by the nonprofit Wildlife Defence League, the man — who remains anonymous but claims to work for the BC government’s caribou recovery program — explains that a wolf is caught in foot traps, tranquilized, and fitted with a radio collar. When the collared wolf rejoins his pack, the entire pack can then be tracked and killed by gunmen in helicopters. Above the sound of rattling machinery, the source also reveals that the collared wolf is kept alive to track and kill any new pack members: “They leave that one with the radio collar to live, and now they can come back, and okay he’s got buddies, better take them out.” Although the source didn’t specify whether the wolf would be kept alive for next season’s cull, members of the Wildlife Defence League believe that he will be.

Although conservationists have long suspected that a lone wolf (often called a “Judas” wolf) is used to track and kill an entire pack, members of the Wildlife Defence League were astonished to learn that the wolf was kept alive after the initial cull. “It’s shocking and heartbreaking, not to mention inhumane,” says Tommy Knowles, founder of the Wildlife Defence League. “Can you imagine how you’d feel if you saw your whole family killed in front of you?”

Marc Bekoff, author of Rewilding Our Hearts: Building Pathways of Compassion and Coexistence, echoes Knowles sentiment, and suggests that the emotional pain the Judas wolf would go through would be unimaginable. “Wolves are highly social, emotional, and sentient animals, and the use of a Judas wolf is reprehensible, morally indefensible, and should be absolutely forbidden, illegal and severely punished,” he says. “There’s no doubt that the individual who is chosen to ‘betray’ her or his family, friends, and others, deeply suffers as do the other wolves who are lured in.”

In February, Wildlife Defence League released the audio recordings to the public, asking the BC government to respond to the allegations that a Judas wolf was kept alive. A spokesperson from the Forests, Lands, and Natural Resources told National Observer that “there was not a lone wolf being kept alive last year as a ‘Judas’ wolf,” but the government hasn’t confirmed or denied whether a wolf was kept alive this year. “We haven’t received a direct response from the government,” says Knowles. “I think they’re deliberately avoiding the question.”

Coupled with the cruelty of keeping the Judas wolf alive, Knowles believes shooting wolves by helicopter is not as “humane” as the government claims it to be. “The BC government says it can kill wolves with one gun shot from a helicopter, but if you look at wolf hunting videos from the 1960s an 1970s, you’ll see that’s not really possible,” Knowles says. “What’s more likely is that wolves are being shot in the hind leg or hip, then darting into the woods to die a slow, agonizing death.”

The BC government has allocated $2.2 million in taxpayer funds to pay for the five-year wolf cull program, which began in January of 2015, hiring local BC company Bighorn Helicopters to gun down wolves in the South Selkirk and South Peace regions of the province. Bighorn is the same helicopter company that killed over 1,000 wolves in Alberta between 2005 and 2015 in what was later shown to be an ineffective strategy to stabilize caribou numbers. In February 2016, the Wildlife Defence League launched a pressure campaign on Facebook to try and get Bighorn to end their participation in the cull. “We’re encouraging the public to call in and email them, just to let them know how they feel about their tax dollars being spent on the wolf cull,” says Knowles.

Conservationists ultimately hope that the BC government will stop the cull, and refocus its efforts on protecting the region’s remaining old-growth forests, habitat for the endangered caribou. These forests are being destroyed at an alarming rate from logging, mining, oil and gas exploration, and recreational activities, which wildlife advocates see as the root cause of caribou population decline.

Admittedly, there is a slim chance the mountain caribou herds will successfully recover to pre-industrial numbers. As Krista Roessingh of the nonprofit Pacific Wild explains, habitat fragmentation and destruction is just part of the problem. In some regions of British Columbia, such as the South Selkirk, a herd of just 12 to 18 caribou remain, which is too small to be a self-sustaining number. “When caribou numbers go down, it means they’re susceptible to all kinds of problems. If you have a population of 18 caribou, for instance, there’s a good chance that wildfire or disease or bad winter could wipe that whole population out.”

Even if it is too late for the mountain caribou, Roessingh believes that wolves shouldn’t be scapegoated for the mistakes of humans, and that the BC government should examine the ethical consequence of killing wolves. “I don’t think it’s a question of saving the wolf,” Roessingh says, “it’s a question of keeping them from being senselessly killed in an inhumane way to make up for years and years of government inaction on caribou habitat protection.”