Body, Home, and the Wild

Where we begin after wildfire
Maya Khosla

For the past four years, I have spent much of my time documenting wildfires and post-fire wildlands in California — strikingly beautiful forests, shrublands, and grasslands that are full of life. On the night of October 8, 2017, the wildfires of Sonoma and Napa Counties came close to home. 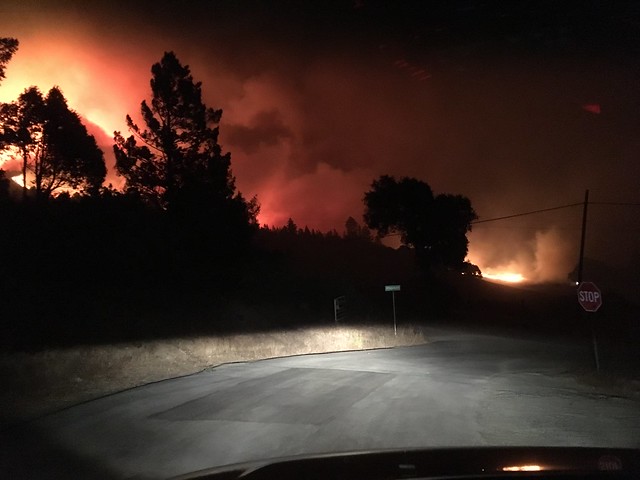 Photo by Ginger Gillogly A view of the wildfire when it reached Pepperwood Preserve in Santa Rosa on the night of October 8.

Driving along Highway 12, my friend Paul Lamb and I witnessed flames cresting over a ridgeline to the north, somewhere in Napa County. We stopped while a fire truck raced past, followed by another. The Diablo winds were strong enough to blow my car door open as I emerged (I later learned the gusts were reaching 60 miles an hour that night). Wind filled the darkness with sound; the distant red glow on my camera screen was silent. Within minutes, the glow had grown into full, bright flames, flowing down the hill. “It’s coming closer,” Paul warned as we drove on. A few hours later, Highway 12 was closed along with sections of Highways 101, 121, and 128, and 29. “Fire was running downhill like a river,” my friend Maria Alvarez, a plant ecologist, described the view of burning grasslands from her hilltop home in Cotati.

The flowing river was an illustration of what fire scientist Dominick DellaSala described as a “top down effect” at a senate briefing about wildfire, held during the second week of October 2017 while the Napa and Sonoma fires were burning. Hot, dry weather, and dry winds are top-down drivers, expected to increasingly dictate the terms of wildfire with the current climate change trends, while vegetation (“fuels”) and terrain are bottom-up drivers — increasingly overridden by the top-down drivers. “In a changing climate, we’re going to see more of the top-down drivers in some regions,” DellaSala predicted. Acreages burned could also rise in the future.

That same night of October 8, the Tubbs and Nunn wildfires of Napa and Sonoma Counties quickly crossed the wildland-urban interface (WUI), and transitioned into tragic urban fires, destroying homes and displacing people by the thousand. Friends and friends of friends lost their homes. “Make no mistake, Cal Fire Chief Ken Pimlott said,” this is a serious, critical, catastrophic event.”

“This is not a classic wildfire situation; this is really an urban conflagration,” Max Moritz, a fire scientist at UC Santa Barbara, cautioned on Democracy Now! “There’s conclusive evidence for a link between today’s fires and climate change.”

“Once a wildfire enters an urban area, it’s no longer a wildfire – it’s an urban fire,” said Dr. Tim Ingalsbee, Director of Firefighters United for Safety Ethics and Ecology, during a recent interview. “Homes are more flammable than the forest itself.” By October 9, thick smoke was hanging over everything, clinging to everything. The fires were still burning. By October 11, parts of Rohnert Park had been evacuated. Neighbors were racing out of their homes carrying backpacks and garbage bags bulging with belongings. Texting for emergency information (888-777-your-area-code), I learned that sections north of Petaluma Hill Road, approximately two miles east of my home, were also being proposed for evacuation. I left town with my passport, hard drives, old photo albums, extra clothes, and field gear. And the outside light left on.

Months earlier, members of The Sitting Room, a unique library featuring books by women, had invited me to speak about the biodiversity of post-fire forests — as part of their series called Shining Lights. My co-presenter was Dr. Elizabeth Herron (professor Emeritus, Sonoma State). By October 14, the presentation date, the library was part of an area north of Petaluma Hill Road that was zoned for evacuation. “Looks like Petaluma Hill Road is closed,” a friend wrote me at 7:14 a.m. Even if the event was held, I did not know how to begin. But Dr. JJ Wilson, professor emeritus from Sonoma State University and co-founder of The Sitting Room, cheerfully observed cars “whizzing by.” Evidently the event was on.

This was no time to talk about the biodiversity after wildfire without first talking about human health impacts, the many losses, and where we begin after wildfire. So, I changed my topic to “Body, Home, and the Wild,” and began with the body.

The Encyclopedia of Natural Medicine contains sections about herbs that assist in detoxifying the body after exposure to smoke (which can include several carcinogens). Detoxification happens in the liver, which is equipped with a group of cytochrome-p450 enzymes that assist with phase 1 of the detoxification, and another group called phase II enzymes that further change those toxic chemicals into metabolites, often making them water-soluble, so that the body can reject the metabolites with ease. When we are exposed to high concentrations of smoke — when the liver is working hard — it needs help.

Broccoli, cabbage and Brussel sprouts, and the seeds of coriander, dill, and caraway stimulate both the phase I and phase II enzymes. And curries — particularly turmeric in combination with pepper — stimulate phase II enzymes. “We recommend curries… to smokers and people exposed to secondhand smoke,” write the Encyclopedia authors Michael Murray and Joseph Pizzorno.

I noticed that most members of the audience were nodding while I explained about turmeric, but all were surprised about the turmeric-pepper combination, and the other herbs.

What about my four friends and countless others who had lost homes, even family members, and what about the homes left standing, which were still at risk? The Napa and Sonoma fires were still burning. My home and The Sitting Room were in sectors of Sonoma County that had been left untouched, but most were not built with fire-proof materials. Most of the homes had no sprinkler systems on the roofs. Homes would be at risk if embers came flying in and our rooftops were dry (I discovered that JJ’s garden hoses could spray water to the top of The Sitting Room roof). During the hot, dry period of Diablo winds, the difference between a burned home and a standing home not built with fire-safe materials was essentially the difference between a live ember flying in one direction or in another. So far, we had been lucky.

On October 21, at the Bioneers Conference in San Raphael, Native American Eddie Willie brought historical context to the Santa Rosa fire. The area where most homes burned down was once a massive patch of dogbane, a plant that thrives after wildfire. Dogbane was essential, his ancestors used it to make string and rope. The massive patch had been cleared, the homes built, and now many of those homes were gone. “We’re rebuilding. But we’ve got to think about the history of this place. It has been burning for thousands of years,” Willie reflected.

He was describing a part of Santa Rosa that is located within the Wildland Urban Interface (WUI), an area where homes abut wildlands. “This area, the WUI, is expanding rapidly and it is where most of the homes are destroyed in fires,” said Dr. Alexandra Syphard at the October 2017 Senate Briefing. Syphard is among many other fire scientists who are explaining why some homes burn while others stay standing. It’s about the materials and the space immediately surrounding a home, and it’s about “location, location, location.”

Building a fire-safe home is about fire-proof materials — metal roofs, metal-framed windows, screened vents, stucco, and other fire-resistant materials. “And it’s about clearing a 100-foot area around a home —what Cal Fire and other fire managers call the defensible space… a buffer of minimized vegetation to provide safety to the home… The science suggests…it’s more important and effective to strategically place fuel treatments close to communities where they are needed and where firefighters can defend homes. Not in the wildlands.”

Maya Khosla A female bluebird outside cavity in a snag forest. The burned snags are home and habitat for many birds as well as small mammals.

Fire science is still relatively new, and the current fire management practices are geared towards fighting wildfires — battles that appear to do as much good as fighting active volcanoes or flooding rivers. Meanwhile, the Westerman and two other bills now in Congress are proposing fire management actions that will severely limit or do away with environmental review processes like the National Environmental Policy Act (NEPA) and the Endangered Species Act (ESA) — so that agencies can implement active management in wilderness areas. Proposed management actions include massive fuels treatments —thousands of acres of logging in areas that located miles from homes — to supposedly “protect homes.”

The top fire scientists and an ever-increasing contingent of scientists armed with over a century of fire data and decades of their own research, are spreading the word: Logging far from homes and communities destroys forests and their processes, and does nothing to protect homes or communities.

Logging close to homes is the only logging that increases the chances of homes surviving wildfire. The facts are supported by thousands upon thousands of case studies, and well over a hundred publications. In a recent investigation of over 1500 wildfires, occurring across 23 million acres of forests within the western United States over the course of 40 years, Curtis Bradley, Chad Hanson, and Dominick DellaSala found that actively managed areas burned with highest intensity, and protected wilderness areas burned with much lower intensity wildfires, mixed with moderate and high intensity.

“If we are concerned about hot fires, they are not occurring in the wilderness areas and national parks. Those burn with more of a mosaic of low, medium and high intensity fires,” DellaSala concluded.

Meanwhile, our wildlands continue to evolve with wildfire — as they always have. Long before today’s peer-reviewed studies, John Muir wrote about “the extensive groves and belts” where he recognized “a new generation quickly [springing] out of the ashes…in a hurried race for light and life.” And the high biodiversity of post-fire forests, chaparral habitat and meadows is not limited to plants. As an example, all manner of wildlife, many of them imperiled species like Pacific fishers, goshawks, sharp-shinned hawks, spotted owls, black-backed woodpeckers, and bluebirds, are drawn to the post-fire forests. Mixed intensity wildfire sets the clock that begins the many stages of forest growth.

Biologists have found rare plants, conifer seedlings, and over 80 other species of birds in forests that experienced the 2013 the Rim Fire in Stanislaus National Forest and Yosemite. Closer to Sonoma and Napa, teams of scientists are finding rare fire poppy (not seen in 40 years), Kellogg’s snapdragon (not seen in 80 years), Mount Diablo jewel flower, and wreaths of other wildflowers across the mountain. The biodiversity, like the wildlands themselves, will continue to grow if the habitat is left intact.

And while we rebuild Sonoma and Napa — hopefully integrating defensible space into all building plans — we are yet to discover the post-fire habitats that will arise from the ashes.